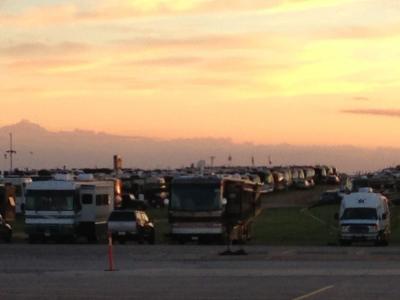 Gillette, Wyoming, is a certified American boom town. It’s 30,000 residents have grown by a whopping 48% in the past decade as this western city has become the nation’s self-declared “energy capital of America,” thanks to its vast quantities of coal, oil and coal bed methane gas. But today, it just grew by thousands more as 2,500 motorhomes of all shapes and sizes rolled into the sprawling CAM-PLEX exhibition center just east of town. Add another 5,000-plus people to Gillette.

Most of those here are in luxury Class A motorhomes, and many of their price tags are in the mid-six figures. My Roadtrek Class B eTrek is wedged between a couple of Class Cs in what is a vast sea of motorhomes parked 6 feet apart and 6 feet front to back in long lines that have instantly transferred the mostly crushed gravel parking lots and fields of the CAM-PLEX into an RV urban center.

This is the 88th Family Reunion and Motorhome Showcase of the Family Motor Coach Association and it officially starts Wednesday and runs through the weekend. But with so many coming here from across the country, to simply park them all means people had to arrive early. The event features seminars and entertainment and vendor exhibits. I’m teaching two seminars, on Wednesday and Friday.

I’ll use the time to meet folks, and to check out the latest in motorhome offerings and industry products.

Events like this aren’t for everyone. They are very crowded. There is no scenery, just the back of your neighbor’s unit and the slideouts of your side neighbors. There are also elements of a political campaign here. The FMCA has lots of officers. I mean lots of them. Signs affixed to some of the coaches urged passersby to vote for their favorite candidate.There are candidates running for national president, treasurer, vice president and even something like first national senior vice president. At least that’s what I think one campaign sign read.

We started the day in the Black Hills around the Custer State Park, driving a wildlife loop and marveling at the scenery in the morning. We saw deer, antelope and several of the 1,000 or so bison that roam the park. Gillette was an easy 125-mile ride to the west along a two-lane that paralleled I-90 and cut through wide open grassland.

We arrived at the CAM-PLEX about 4 p.m. and soon met several other Roadtrek owners attending the event. Two were parked in dirt with no hookups over by what appeared to be a horse corral. Several others were scattered through the complex.

Jennifer and I checked out Gillette, doing laundry and then eating out at a great little Mexican restaurant.

But the big find today was the Campbell County Recreation Center, the most deluxe and full-featured health and fitness facility we have ever seen. It is a massive, 190,000-square-foot facility with two water slides, a lazy river, three basketball courts, four racquetball courts, an elevated walking track, a kids zone used for baby-sitting, concessions, a weight room, a cardio area, three exercise rooms, two birthday party rooms, two tanning beds, training and locker rooms. In a partnership with the Campbell County School District, there is also an 81,000-square-foot field house with a six-lane, 200-meter track and five indoor tennis courts.

I guess being the energy capital of America has its perks.

Jennifer is ecstatic. We’ll spend early morning hours there before things get busy at the FMCA event.