Lots of you have written asking for a show and tell and some details about the travel trailer we just just purchased to take on our “Great Roadtreking Family Vacation of 2013,” which starts Saturday.

The video gives you a quick peek at what it looks like.

Jennifer and I love the 2012 Roadtrek eTrek. We’ve put well over 20,000 miles on it since we got it around the first of the year. But Class B motorhomes in and of themselves are not a family RV. While we could take on a grandkid for a couple of nights by turning the passenger chairs around and putting a special bed pad across them, it would get pretty crowded for an extended period.

There’s plenty of room for the two of us and Tai, our Roadtrek-loving Norwegian Elkhound. But as we’ve been on the road for the past year-and-a-half in the eTrek as well as the 2006 RS Adventurous we previously owned, we’ve wished that we could bring along more of the family. 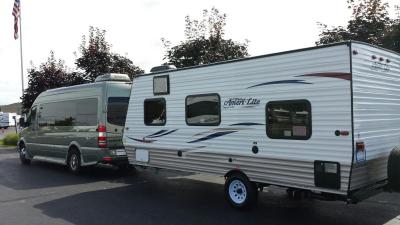 Towing a trailer is the perfect solution. We could have gotten a pop up, I suppose. But we prefer hard sides, especially as we go deep into the Rockies on this trip in grizzly bear territory.

The Roadtrek comes with a strong hitch. It needed a ball adapter to connect to the trailer. I also borrowed some load levelers, a weight distribution system that prevents swaying that is part of the hitch equipment.

The unit we got is from a relatively new travel trailer category called ultralites. There are a bunch of them available now for the booming travel trailer market. Our Roadtrek eTrek with the Mercedes diesel engine on the Sprinter chassis, can easily all 5,000 pounds.

The 2014 Gulf Stream Amerlite Super Lite 19BHC model we bought new from American RV in Grand Raids, MI weighs 2,789 pounds. It is 21 feet long. Inside is a queen bed with a regular bed mattress, two twin bunk beds, a bathroom with a shower and a small tub, an air conditioner, microwave, two burner propane stove, small refrigerator, lots of storage cabinets, granite countertops and a two-person dinette than can also make into a bed. Outside are rear stabilizer jacks and an awning.

I have only towed it about 50 miles so far and hardly knew it was there. The Roadtrek’s side mirrors let me clearly see both sides of the trailer and the road. Since the trailer is a little shorter than my eTrek so there was no extra wind drag or buffeting. I drove it from Grand Rapids to a son’s house in Kalamazoo, from where the vacation will start off from this weekend.

The drive was on an interstate, US131, and I averaged between 65 and 70 mph. I discerned no additional sway with the trailer.

That was not long enough to be able to see if there was a significant effect on fuel consumption. Normally, I’ve been getting from 16-18 mpg with the eTrek. I keep track of every fill-up so after a couple of days heading west towing the trailer, I’ll have an accurate idea.

But you know, my advice is someone shouldn’t get into RVing if counting every penny is their thing. This is a unique lifestyle we’ve chosen and while I believe small motorhomes offer the most economical and rewarding RV experience, it’s not cheap. Our coaches are major investments, probably the biggest we’ll make after our brick and mortar homes. But they are freedom machines.

And I’m looking forward to being able to share that freedom with my family in the new travel trailer.