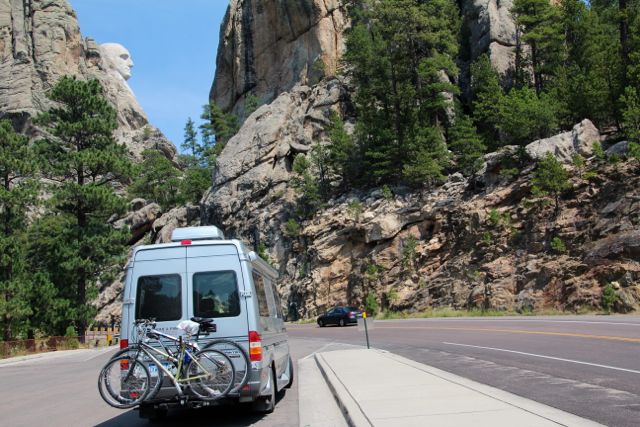 When we first started out 18 months ago, I have to admit, I had my doubts about a life of RVing in a Class B motorhome, sometimes referred to as Type B to do away with all the negative stereotypes that come with the word “Class.”

Anyway, I was sure it would be fine for weekend getaways but as the this blog took off and it became apparent that we were going to be traveling a lot more than I first planned, we secretly wondered whether the 23-foot Roadtrek we travel in would be big enough.

Now, with more than 42,000 miles under our tires and extended trips for weeks at a time over the past year and a half, we know the answer: It is!

But more than that, we’ve realized we are living out a major trend in RVing, a boom in class B RV sales that seems to be turning around an industry hard hit by the economic doldrums that had put many a dealer on the edge of bankruptcy.

The RV business is once again healthy, and leading the resurgence are Class B RVs.

Monthly sales figures for Class B’s confirm what we’ve concluded from our own experience, interviews with dealers we have met at various RV shows around the country and the many other Class B owners we’ve met in our travels this past year.

The Recreational Vehicle Industry Association deftly tiptoes around the size distinctions of motorhomes, simply noting that “Class A motorhomes are generally the largest; Class B motorhomes or van campers are the smallest and Class C motorhomes generally fall in between.”

Class Bs are typically on a Chevrolet, Ford or the Sprinter van body, modified and converted into a motorhome.

When it comes to Class B motorhome manufacturers, there’s the Big Six. And it’s dominated by Canadian companies.

Two are in the U.S. – Winnebago, marketing its Class B under the Era brand in Forest City, IA, and Thor Industries’ Avenue and Interstate models, in Jackson Center, OH which the company says are inspired by its Airstream brand.

A new Class B manufacturer – Advanced RV - located near Cleveland – opened shop earlier this year, building luxury motorhomes on the Sprinter platform by direct factory order, with no dealer network.

The boom in Class B sales can be attributed to two trends.

Baby Boomer Retirees – Each day in America, 10,000 Baby Boomers reach Social Security age. Sociologists tell us this generation of retirees is the most healthy, active, affluent and adventurous of any other group that came before. Many, retiring early because of buy-outs or being forced out during the economic downturn, have made calculated decisions to seize the opportunity to see the country. Others have planned for this moment for years. But new retirees are choosing Class B’s because of their easy mobility and the convenience of also being able to use them as second vehicles.

Downsizers – There is also a sizeable contingent of new Class B owners who are downsizing from a Class A or C. These are typically veteran RVers who have been on the road for several years. Some are fulltimers who have found an area of the country to purchase a home and settle, but still want to be able to travel in comfort. Others want to be more flexible in the places they go and are downsizing as part of a transition to simplify their lives or are tired of towing a second vehicle or being relegated to pull through spots and full service campgrounds.

Jennifer and I are in the first category. Granted, we don’t know anything different. We’ve never tried a Class A. And sometimes it does feel cramped in our Roadtrek, especially when our 70-pound Norwegian Elkhound, Tai, is traveling with us. But we’ve adjusted to the tight spaces we absolutely love the mobility our Class B provides, from pulling into regular parking spaces to being able to boondock and stay deep in state and national forests, totally self contained in true wilderness.

Darlene, a reader of this blog, has owned a Class B 2004 Roadtrek 190 Popular since 2010 and has taken trips as long as five weeks in it.

“We have purposely bought small RV’s to force ourselves to be outdoors,” she says. “You can never feel closed in being outdoors. The whole idea of taking a trip is to be enjoying and appreciating the great outdoors.”

John and Sally Hearne from Pittsboro, NC are typical of many downsizers. I met them at the FMCA’s 87th annual reunion in Indianapolis last year and shared a seminar stage with them about downsizing from an A to a B.

They started RVing in 2005 with a 32-ft., gas-powered Class A motor home and traveled across country. They did all the bucket list spots – the Grand Canyon, Bryce Canyon, Zion National Park and fell in love with the RV lifestyle. In 2010, they traded in their 32-ft. gas model for a 40-ft., four-slide diesel pusher, complete with a washer and dryer, residential refrigerator, and central vacuum system.

For five months, they traveled the country with gusto in their big rig, towing a car behind them. But then, some discontent entered the picture.

“We found that traveling in a large coach requires that you do most of your traveling on major highways and Interstates,” said Sally. “Therefore, we didn’t get to travel on the back country roads that we love to tour.”

The more they traveled, the more the allure of that 40-foot motorhome began to wear off.

“We could only use fueling stations that could accommodate our size and length. There was no impromptu stopping along the way. I would see a roadside stand with fresh produce that I would love to buy. But, there was nowhere to put our big rig. We couldn’t just pull off the road anywhere. I saw shops in small towns that begged to be explored. Nope, we couldn’t do that. There was nowhere nearby to park. By the time we could find a campground that could accommodate our coach, unhook the tow car, and drive back to the produce stand or small town shop, we would be miles away from the place of interest. So, I just had to forget about it. “

“The space is a miniature of the Class A, but it has all we need,” Salley explains. “There is inside storage for clothes, food, etc., and outside storage for some essentials. Since it is so easy to stop anywhere we want, we do not have to stock a large amount of food. We love being able to drive anywhere we want to go in town or out of town.”

The Hearnes experience has been echoed by many.

Ron Woodward, a retired engineer from Minnesota, told me about the same thing. He previously owned a Class A. Last year he downsized to a Class B from Pleasure-Way. “We didn’t like the big campgrounds and our dependency on hookups,” he said. “Now, we can go anywhere. We love boondocking in the state forests. Just us and nature.”

With fall rapidly approaching and colder temperatures on the way, the great Snow Bird migration to warmer regions will soon begin.

We’re hoping to become a part of it this year, taking long trips to Florida, the Gulf States, the Texas Hill Country, Arizona and the Southwest.

We won’t be gone the entire season but rather will return to our Michigan home for grandkid fixes, planning three and four week forays on each leg.

But we’ll do so confident of our Class B RV and excited about the adventure that awaits as we go Roadtreking across North America.

Hope to see you out there…on the open road.