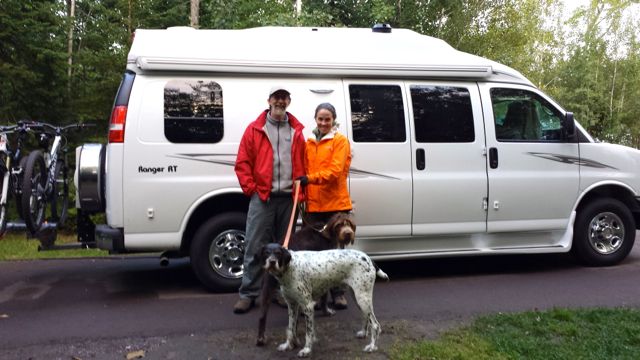 The RV life is so much fun because you don’t know what adventure is around the next bend. But the people you meet along the way are equally enjoyable.

I don’t think Jennifer and I have yet to return from a Roadtreking trip without making some new friends. On our most recent trip to Michigan’s Upper Peninsula, we met interesting people at each stop.

Up at the Historic Fort Wilkins State Park in Copper Harbor Michigan, we found ourselves sharing a campground with husband and wife Roadtrekers Dave DeKeyser and Rebecca Cleveland, two new Roadtrek RT Ranger owners. The couple travel with their two dogs Cisco and Archie and carry two bicycles on the back.

That’s to be expected because the two own The Bike Hub, a bicycle retail and service shop in the Northwestern Wisconsin town of DePere. From late April through August, they can hardly find time to ride themselves because summer is prime time in the bike business.

But from now through late spring, they getaway every chance they can, the past week or so riding the awesome mountain bike trails near Copper Harbor, and after the holidays, off to Arizona and Colorado and the cycling scenes there.

The couple loves their RT Ranger, which was upgraded out with a heavier chassis, a propane heater and a generator. The two dogs sleep up front and the couple has no problem with room.

“This s perfect for us and our lifestyle,” said Dave, between walks and hikes with the dogs and mountain bike rides with his wife. Rebecca, a former professional racer.

At the same campground, we reconnected with Dennis and Joyce Crabtree, who have been on an extended multi-state tour in their Roadtrek RS Adventurous from their Commerce City, CO home. We had earlier met the couple at the Roadtrek rally in Branson, Mo., this spring.

The Crabtrees are veteran Roadtrekers. Joyce needs help breathing from a special machine but doesn’t let that keep her from seeing the country. The electrical system on their Adventurous delivers solid, reliable power all day long.

Dennis is a kayaker and when we pulled alongside, he had just put his kayak on the roof of the Honda CRV he tows. He had been out earlier in Lake Fannie Hooe and had caught a walleye.

“Towing our car lets us easily stow the kayak,” he says. “And we can hook up camp and Joyce’s satellite TV dish and not have to move. The Roadtreks can pull up to 5,000 pounds.”

From Copper Harbor, we made our way down to St. Ignace, just across the Big Mac Bridge that connects Michigan’s two peninsulas.

At the Straits State Park there, we came upon a 2006 Roadtrek 190 with a vanity front license plate that identified it as “The Condo.”

I had to get a picture so knocked on the door and thereupon met Nick and Jan Nopper, from Grand Rapids, MI. They bought the Roadtrek this past summer, downsizing from a 40 foot Monaco Class A motorhome.

“This is the fifth motorhome we have owned,” said Nick. “The four other ones were Class A’s. We had that same license plate on all of them.”

The choice to downsize was an easy one for the couple. “This is just much easier to drive,” he said, pointing at his new Roadtrek. “We also just bought a home in Florida and we can use this to go back and forth and even take some side trips with.”

The couple was on their way over to Mackinac Island for a three day getaway at the Grand Hotel with the Roadtrek providing transportation and a place to stay on the road. “We just love seeing the country,” said Nick. “Gives us something to do besides just sit around in our old age.”

If there is any common denominator between these three very diverse couples it has to be the spirit of adventure.

Such is the Roadtreking life. Our RVs – be they Roadtreks or small motorhomes from other Class B manufacturers – offer mobility and ease of operation, with room to take everything we need to be comfortable.

There are new places to visit and new friends to make. It’s a big country out there. And our small motorhomes can get us there.

Like the T-shirts on the Roadtrekingstore.com say, we may have a small house. But we have a big yard. 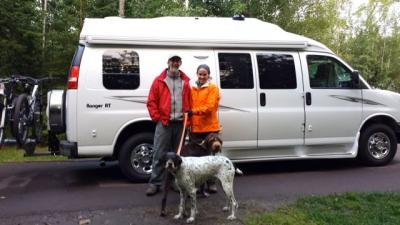 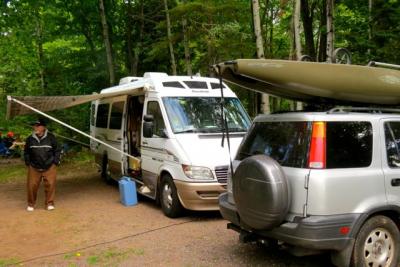 Dennis Crabtree from Colorado outside his RS Adventurous. He tows the Honda CR-V with the kayak on top. 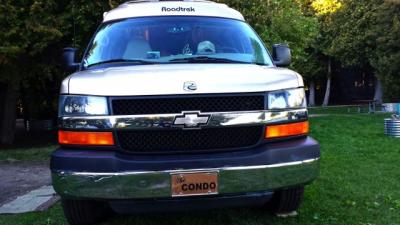 The Grand Rapids, Mich., couple who just bought this Roadtrek 190 downsized from a 40-foot Class A motorhome. They call their Roadtrek “The Condo.”