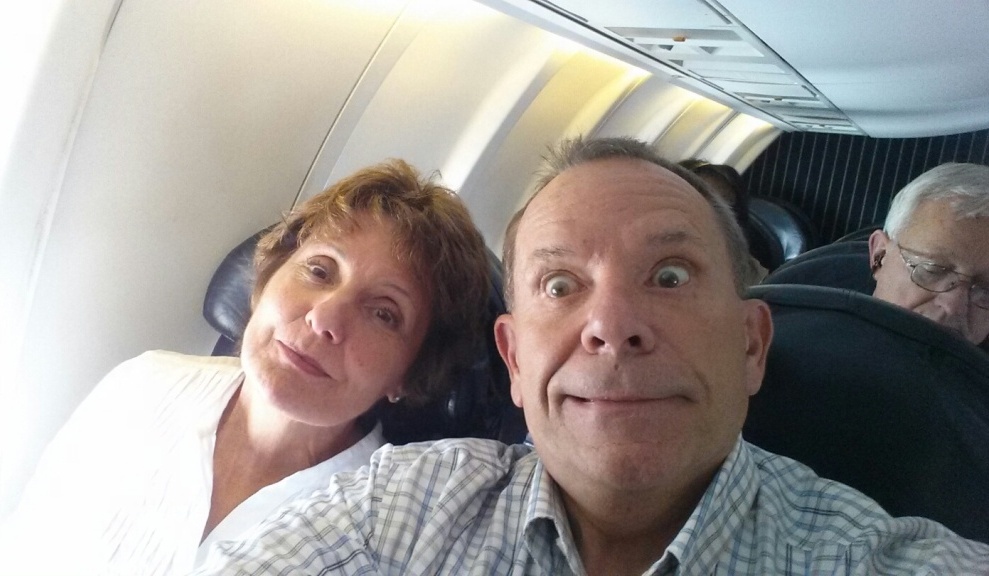 I hate flying. In my past life as a journalist, I was frequently in the air, flying here or there for this story or that. I grew to dread air travel.

But now that I travel in an RV, I hate flying even more.

I write this from Albany, GA, where we are visiting family. It’s a quick visit, to watch the grandsons play football and to attend grandparent’s day at the youngest one’s school. We’re flying on gift tickets, down here just for the weekend and then back to Michigan.

This is the first airplane trip we’ve taken since we bought got a Roadtrek some 19 months ago.

We’ve made the trip many times in our Roadtrek. It’s about 950 miles, an 18 hour drive. With food and fuel stops, you can do it in one very long day’s drive. We prefer spending the night in the Roadtrek.

In the Roadtrek, we have everything we need. We can bring all the clothing we think we may need, all the supplies and food and we can stop where we want, eat where and when we want.

It is like traveling with our home. We like the drive, get to take our dog and can take turns driving.

We are the masters of our journey.

The actual flight from Detroit to Atlanta is a about two and a half hours. Then it’s another hour and 20 minutes on a small commuter airplane down to Albany. So, all told, flight time is just shy of four hours.

But that is not representative of real travel time. And it comes with a huge cost: Aggravation, a loss of control and germ exposure.

The first frustration came when we packed our bags. We take carry-ons. I’ve lost too many bags at too many airports over the years to let the airline handle them. Alas, you can’t bring what you want in a carry-on. Shampoos , conditioners, hair products, shaving cream, etc (unless they are in miniature containers) are all forbidden. Carry-on space constraints mean other things that we’d normally have in our Roadtrek – like a hairdryer jackets or sweatshirts – have to be get left behind

We departed our house at 9 AM, drove to my daughter’s home in another. Tai, our loyal RV traveling companion, was something else we had to leave behind. He gave us that forlorn “what, you’re abandoning me?” look and we felt terribly coldhearted as we rushed out.

It took close to an hour to get to our daughter’s house in another Detroit suburb. Then we drove north to Flint, MI and the Bishop International Airport. Add 45 minutes.

Then there was the hassle of finding a parking spot at $15 a day. Standing in line, going through airport security – taking off shoes, belts, removing laptops, getting the carry-ons inspected. And another hour.

The government shut down also resulted in laying off most TSA gate inspectors and agents. Yet there was a full contingent at the airports. I talked to one of them and he told me they were all working without pay, hoping that whenever the government gets its act together and “reopens,” they’ll get back pay. “If this shutdown continues, I don’t know what I’ll do next week,” he said. “I’m running out of gas money,”

We go to the waiting aress. The Delta attendant at the gate used the public address system to asked passengers to put their carry-ons at their feet because the carry-on bins would be full. Ug.

By the time we’re actually on the plane – jam-packed, everyone breathing everyone else’s air, Jennifer and I are cramped, uncomfortable and annoyed to no end by a noisy couple in the row behind us who seem to be incapable of speaking a sentence that does not contain the F-word.

We get into Atlanta’s gigantic Hartsfield International Airport a little after 2 PM. It takes 15 minutes to get off the plane from our Row 30 seats. Our arrival gate is in Terminal B.

The hallways are jammed. People push and nudge to get close enough to read the departure sign for connecting flights.

Our Albany departure is in Terminal D.

We walk for close to ten minutes, jostled and dodging other harried passengers who are dragging all sorts of wheeled suitcases behind them. Then it’s a short line to board a long escalator down to the train that takes us to Terminal D.

The train is elbow-to-elbow crowded. We all hang on to whatever pole or strap we can find as the train accelerates. Even so, a man in front of me looses his balance and lurches backward, roughly bumping into an elderly lady. Both would have gone down if it weren’t so crowded. Instead, wedged in like that, all they could do was ricochet off other passengers. The woman glared at the man, who apologized profusely.

As the train rapidly decelerates at Terminal D, he’s holding on good. He tried one more “I’m sorry” but she is having none of it.

We all try to exit the train at once, before the doors close, an irritating beeping noise indicating it would be happening soon.

There’s an even longer line for the up escalator. More bumping and jostling ensues. A guy cutting in front of me from the side sneezes inches from my face. Terrific.

Up into Terminal D, it is again so crowded you need to merge into the traffic flow like you do in a car on the freeway of a big city at rush hour.

We try to find food. There are long lines at each place. It’s also always lunch hour at the Atlanta airport.

I’m getting cranky by now and go to find our gate while Jennifer searches for nourishment.

There are no seats at our gate. I find two unoccupied spots a few gates down. I put my laptop on the seat next to me to save it for my wife, drawing angry glances from others looking to take a load off their feet Eventually, Jennifer shows up. She managed to scrounge up a blueberry muffin from down the way, a muffin made surely within the past month. Or maybe a little longer. Hard to say.

Someone a few seats away is coughing up a lung. Not good.

Finally, we catch the connecting plane to Albany.

It’s a small 50-seat plane, two rows of two seats on each side. Roller bags have to be checked. There’s no room for them. Nor is there any room in the seats. I’m glad it’s Jennifer’s thigh I’m making contact with instead of a stranger.

I hear someone behind me sniffing and coughing. At least he’s not sneezing.

We land in Albany a little after 5 PM. Then we retrieve our bags, make our way out of the airport and drive to our son’s place.

We arrive about 6 PM – nine hours after leaving home, but way more tired than if we had driven in the Roadtrek.

But if given the choice, I’ll take the Roadtrek any day. 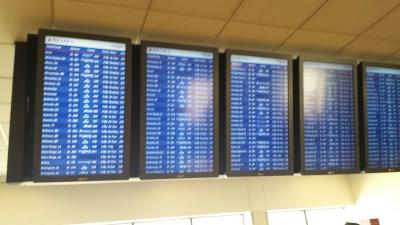 Being jammed together in an airplane and having to abide by flight schedules is no fun after controlling our own space in an RV.