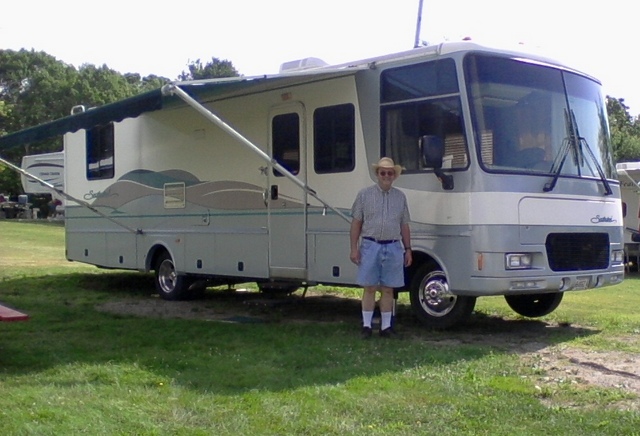 So, we had the "Cottage on Wheels" home, and basically functional, but it still had the original fifteen year old tires. I was looking into tires (a subject for another entry), but we wanted to take a little shakedown cruise. We decided on Meadowbrook campground, in Phippsburg Maine. It is less than 50 miles from our home, can be reached on two-lane roads. I didn't dare take this thing up to 70 MPH on the old tires. Also, Meadowbrook is not far from one of our favorite places in the world, Popham Beach.

I blew the tires up to a little more than the recommended pressure. My belief is that the heat caused by too much flexing in a slack tire would be the worst thing for old tires. I crossed my fingers and said a little prayer and we headed out. Actually, I was more worried about the old tires than I admitted to Grandma.

Getting to Meadowbrook was a bit interesting. There is more than one possible route, but any of them traverse a network of very narrow and twisting roads (typical for side roads on the Maine coast). We also had to look out for overhanging tree limbs and branches. I clipped a couple of them, but don't think I did any damage.

Meadowbrook was not fancy, but nice enough. The WiFi worked at our site. In addition to walking on their campground roads, there was a nice nature trail through the woods. They had an outdoor Karaoke party in the evening. Much to my wife's embarrassment, I did a song and murdered it badly! (First time I ever did this, and I didn't know the song well enough).

We left Meadowbrook early on Sunday and motored to Popham Beach State Park. Being seniors, and Maine citizens, we were allowed in free. They didn't even charge for parking the MH, and they sent a man to show us a nice parking spot where we wouldn't get blocked in.

I had enough beach, and needed to use the facilities, a little sooner than Grandma did, so I went back to our rolling cottage. I put one of my nice old country music cassettes in the player and semi-snoozed on the sofa until Grandma returned. I could get used to this!

A little side note. I'm sort of glad our rig is old enough that it has a cassette player instead of a CD player. Now, I can play my collection of old cassettes! Maybe someday, I'll upgrade the music setup. I would like to be able to play both.

We prepared and ate our lunch in the beach parking lot, then rolled home, stopping for ice cream along the way.

The first trip was great! Everything worked well, and the tires held up.