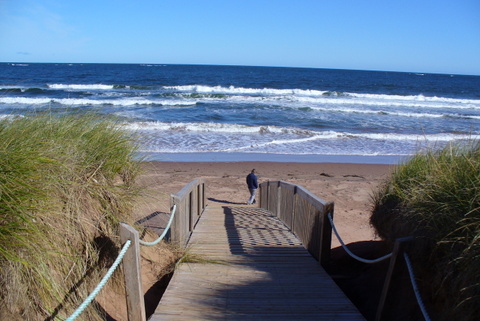 During the week after Labor Day, we took a trip to Prince Edward Island, Canada. It was the longest trip with our "Cottage on Wheels" so far. As I'm typing the story, it's getting a bit long, so I am breaking it into two parts. The attached album includes a few of the many photos I took.

We left home on a Friday evening, after I got done work. We stopped at a Wal-Mart in Newport where we hosted a visit by friends. As they left, our friends pointed out a slack tire. I had just checked the pressures the night before! I found that I had a loose valve stem extension. We got air from one of those wimpy coin operated compressors at a gas station nearby. It cost me 3 or 4 bucks to fill the tire! Instead of continuing on to Bangor, as originally planned, we decided to stay overnight at that Wal-Mart and recheck the tire in the morning. On Saturday morning, the tire pressure was still up. Tightening the valve stem extension did the trick. (Side note - I have since bought an air compressor to carry in the MH with us. Now, we have air readily available.)

We went a bit out of our way, to Mars Hill, Maine, where we had a nice visit with friends that we have not seen for a while. After an overnight there, we crossed the border at Houlton, ME and traveled across New Brunswick to Prince Edward Island. It was mostly good road, with many long hills. There were a few scenic spots, but much of the journey across NB was wooded, without much else for scenery. This is like driving to Northern Maine, but more so.

When we got to the Confederation Bridge, the visibility was not great. It was foggy, with occasional light rain. We could only see about 3 spans ahead of us. We were headed for Twin Shores Campground in Darnley, which is in the northwest corner of the central section of the island.

We decided to let "Bess" (our GPS) guide us to Twin Shores. Bess did OK for a while. She led us along lightly traveled secondary roads through beautiful farming country and small villages. As we were abut 2/3 of the way across the island, Bess told me to turn left, off the numbered route we were on. I followed the instruction, but found that this road was almost all patches and a bit rough. Just as I was hoping for it to get better, it got worse. Up ahead was a long, steep hill with no pavement, just a couple of wheel tracks in the red clay. To complicate matters, it started raining harder. As we reached the end of the pavement, I was looking for a good place to turn around. I passed about 3 driveways that were steep downhill from the road before I found one that was nearly level. That one had wood rail fences on each side, but I managed to back in without hitting anything. We got out of there, but found out later that we had picked up a good coating of that famous PEI red dirt!

After that little GPS mis-adventure, we ignored Bess and navigated by the map for the rest of the way to Twin Shores. I've had cases where the GPS wanted to take me on a direct route over a bad road before, but none as inconvenient as this was. Maybe one of those new, more expensive, RV specific GPS units would be worth the price. They claim that they analyze the routes and only put you on roads that are suitable for your RV.

Twin Shores was huge! They have around 800 campsites. We stayed in an older section where there were spruce or fir trees planted as hedges between the sites. Each site was a semi-private nook, well separated from the neighbors. The store, laundromat and other facilities were nice, though not everything was operating this late in the season. There was a lot of acreage involved. The newer sections were more open, but with great views of Darnley Basin, grass-covered dunes and a large open field. We did a lot of walking, and just plain relaxing at Twin Shores.

On Wednesday morning, we set out toward the eastern shore of the island. We stopped at several scenic turnouts, parks, and a couple of pottery and craft shops along the way. At the entrance to one of the parks, there were a couple of foxes by the road near the entrance. They were not bashful about traffic. In fact, they appeared to be begging for food. We didn't feed them. Generally, we agree with the philosophy that feeding wild animals does them more harm than good.

We had heard of a beach with "singing sands" that make a tinkling sound or something when blown by the wind. It's near the northeast corner of the island. We didn't get that far. While we were stopped at Basin Head, there were dark clouds coming and we decided to look for a place to camp. We had recently passed Red Point Provincial Park, which had "Camping" listed on its sign, so we turned back there.

Red Point was a gem! Being late in the season, the park was far from crowded. I picked a site high in a field, where we had that corner of the park to ourselves and a panoramic ocean view. The only thing missing was the surf sound which we would have heard if we picked a site close to the water.

Wednesday evening, the weather forecast warned that the remnants of a tropical storm was coming on Friday, with heavy rains and high winds. We did not want to be crossing the Confederation Bridge in our motor home in high winds. Therefore, we decided to cut our tour of PEI a bit short and get back into New Brunswick on Thursday.

Thursday morning, we drove directly to Charlottetown. There, we got off the main highway and wended our way to some metered parking alongside a park near the downtown area. I fed two meters with enough coin for a couple of hours, then we walked into the central part of town and to the waterfront. We ate at a second floor restaurant with a nice view of the harbor, but the food was not that great. We treated ourselves to "Cows" ice cream, which is supposed to be PEI's premium brand. Mine was OK, but I've had better.

From Charlottetown, we drove to, and across, the Confederation Bridge. The wind had not come up yet. The visibility was better than out first crossing, but still somewhat limited.

I'll finish the trip in Part 2.