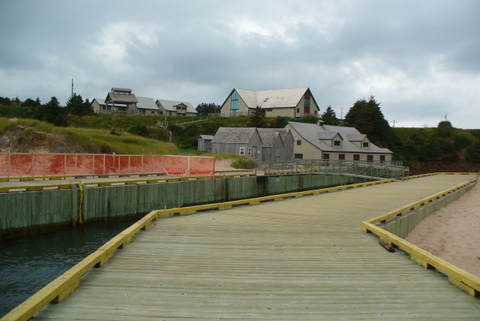 On the way to PEI, we had taken a northerly route from Moncton, via Rotue 15 by Shediac. To see something different, we decided to take the southern route by Sackville. Grandma was navigating and she suggested we take Route 106 through Dieppe and Moncton, thinking it would save some distance, compared to TransCanada Route 2 around the north side of Moncton. It may have saved us distance, but I don't believe it saved any time, as it led right through the heart of the city.

As we were coming to the west side of the central part of Moncton, we were suddenly confronted by a low overpass. I stopped and decided there was no way I would risk going under the thing. Fortunately, there was a left turn available from where I stopped. I took that and we felt our way along until we got back on Route 106. Grandma and I decided that she had not done a much better job of navigating than Bess (the GPS) had on PEI.

I had been searching our big, fat, Woodalls campground directory for a place to stay between Moncton and Saint John. We found a place called "Three Bears." When we got there, at 6:30 PM, the store and office was closed, but the gate was open. There was a nice couple sitting out on the deck of their seasonal site near the store. I talked with them and they suggested I just come in and pick a site. They would call the owners for me. I picked a full hookup site and got set up, but the owners didn't return the call. The nice folks said the owners were usually there by 9 AM, so I said I would just settle with them in the morning.

We had a nice walk around the campground in the evening. We could tell by the shape of the main building that it had once been a KOA. This place was heavily settled by seasonal campers. There were a lot more sites than what appeared from the entrance area.

We didn't hurry about getting up in the morning. When I was unhooked and ready to go, it was 9:30 AM on Friday morning. The owners had still not showed up and the door to the store was locked. The neighbors that greeted us in the evening were not up and around, either. I wrote a note, including my address, and put $40 with it. We drove out the gate and started to look for a place to leave the note and money. At that point, we saw someone in the store. Grandma got out and approached the service window. The person in the store first said that he didn't work there, and couldn't help us. He said he was just peeling carrots and potatoes for a community dinner later that day. Grandma convinced him to take our note and the money to give to the proprietors. It was a reasonably nice campground, but a strange way to run a business.

Back in 2001, I had attended a conference in Saint John. In fact, I was there during the 9-11 attacks. One of the things that impressed me about Saint John was their indoor Marketplace Mall and City Market. These are built in a series of old and new buildings, connected by enclosed walkways over the streets. It looks like a great place to shop in the winter! I wanted to show this place to Grandma, so we found our way to the area and eventually found some on-street metered parking big enough to accomodate our Cottage on Wheels.

We had a nice tour of the shopping area and ate in a seafood restaurant that looked out onto Kings Square. We also looked at the olympic swimming pool and training center that is attached by another ovehead walkway. Saint John is nice. I recommend a stop there.

We had a little rain and fog, but not much wind as we completed the trip across New Brunswick via the southern coastal route, TransCanada 1. We skipped making any scenic stops, due to the weather and our desire to get back into Maine for the night. We crossed th border from Saint Stephen to Calais. We expected that we might be searched, at least somewhat, but we weren't. The US Customs agent did ask to come in to the coach, but once in, he just handed back our passports and wished us a nice day.

We drove back along the Airline Road, Route 9. Along the way,our windshield wipers quit during a rainstorm. I stopped and managed to get them going again, though the wiper park function wouldn't work. Grandma said "don't touch them as long as they are working." (I later discovered that the problem was a loose connector on the electronic module that controls various wiper functions.) There are no campgrounds listed in the Woodall's directory for that route until you get almost to Bangor. However, there are 2 or 3 small places that are not listed in the directory.

We stopped at a semi-rundown store/motel/restaurant/campground in Beddington. It turns out that this is a favorite place of the ATV crowd. Most of the campers there were using it as a base for their ATV trips. All of the sites with working hookups were taken, but they let us dry-camp in a nice corner of the place for $10 plus tax. There was another couple in a motor home doing the same thing.

The next morning, Saturday, we drove to Bangor and did a little shopping at the big mall there. We arrived home in the early afternoon.