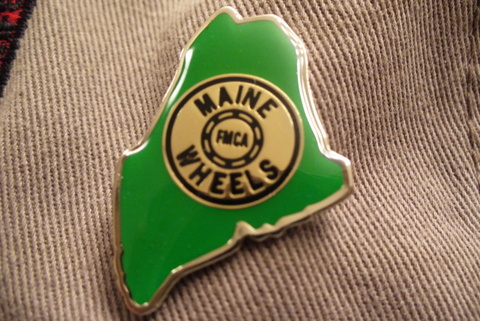 In early September, we got a "Welcome to FMCA" letter from the Maine Wheels chapter, inviting us to join the chapter and to attend their rallies. They meet once a month,from May through October. We had another commitment on the weekend of the September meet, so we decided to join and attend the October rally.

The Maine Wheels met at the Pumpkin Patch RV Resort in Hermon, Maine (near Bangor) on October 11-14. We drove there on Friday evening. This is the first time I have set up the motorhome on a campsite after dark. It turned out to be no problem. The staff led me to the site with a golf cart. The site was a pull-through and was almost perfectly level. Our coach has lights in the lower compartments, which were very handy for hooking up. I almost didn't need to use a flashlight. Another first - this place had cable TV at the sites. I had thrown in a piece of coax for just such an occasion. Soon, we had the TV's set up to receive the cable channels.

After setting up, we went for a walk and found the Maine Wheels group at the meeting hall. They were very welcoming. They had already put their food away, but got out some cake, ice cream and cider for us. They had a "Yankee Swap" gift exchange, which we watched as we started to get to know people there.

Soon, we discovered that the Membership Secretary grew up in the same very small town that I grew up in. We both had the same first school teacher. She knew some of my relatives and I knew some of hers. Because she was a little older, and her immediate family moved away, I didn't know her while growing up.

The Maine Wheels had two seating times reserved for breakfast on Saturday morning at the adjoining restaurant. We joined the later group and enjoyed our conversation with a nice family from Moncton, New Brunswick, who are members of the Perfect Circle chapter. I think there were 2 or 3 coaches attending from Perfect Circle.

After breakfast, several of us carpooled to a Civil War museum in Bangor, where we had a very nice guided tour. We learned a lot about the sorry state of the medical care that the wounded soldiers received. If you were shot, and still had a bullet in you, your chances were far better if you left it there. Surgery almost always resulted in infections, which were too often fatal.

We decided to rest on Saturday afternoon, rather than partake in the group activity. However, Grandma prepared a batch of chili, which we brought to the pot luck supper. After the supper, Maine Weels had a business meeting, during which they finished settling the details of the 2014 schedule.

The Maine Wheels had a breakfast on Sunday morning, which we skipped because we entertained a guest for breakfast in our coach. One of my old friends, who was also a college roommate, lives in Bangor. The time that fit his schedule for a visit was Sunday morning.

We did manage to say goodbye to a few of our new friends before we left for home on Sunday. We may not make all of the Maine Wheels events next year, but we'll take in some of them. They are a good group of folks.

If you, like us, are not sure you care to attend the big FMCA rallies, you might give a local chapter a try. Maine Wheels is quite low-key. It's just a bunch of folks who enjoy their motorhomes, and enjoy getting together.