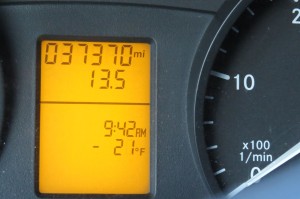 We just hit the road after a long weekend boondocking in our Roadtrek eTrek in the wilderness of northeast Minnesota, spending the weekend in it miles from civilization when the overnight temperature dropped to -21F/-29C.

Those frigid temperatures in the woods were the ambient, real temperature. But we had a very stiff northwestern wind that not only swirled up snow drifts all around s but made for wind chill readings of -50F/-45C.

We could not have been more comfortable. Seriously. Inside, the Webasto heater cranked out a constant 60-70 degrees of comfort. We dropped it down at night for sleeping and raised it during the day when we were going in and out of the Roadtrek a lot.

We were up in Minnesota as a communications volunteer for the John Beargrease Sled Dog Marathon, a 400 mile route from Duluth to the Canadian border. I’m an amateur radio operator and I was stationed at a spot where the musher’s trail crosses County Road 8 north east of the tiny, remote hamlet of Finland, about 85 miles into the gruelling race and smack dab in the middle of absolutely nowhere.

I’ll have a full report and video on the gorgeous country, the race itself and the sheer adventure of it all later this week.

But many have asked how it all went and how the Roadtrek handled it.

First, Jennifer and I are agreed that we are hooked on winter camping. The snow was so beautiful, three feet thick off the trail. At night, the stars were so bright and close that they made you gasp. We heard wolf howls as we spent a lonely night out there Sunday and Monday morning, a hundred yards from us, a big black wolf – the Alpha Male of the pack according to one of the other volunteers we met – twice showed himself as curiosity drew him close to us.

We were dressed properly for cold weather. That’s the secret of course, and we limited our time outside to no more than half hour stretches when we weren’t helping keep track of the passing mushers. Tai, our double-coated Norwegian Elkhound, thought he had died and gone to heaven, though he was noticeable spooked by the wolf. I took him out early Monday morning and he stopped, sniffed the air and had the hackles on his neck raised. I didn’t know why at the time but Michelle, who later joined us at the crossing, said dogs typically are very spooked by wolves. “Sometimes a sled dog team will stop and lie right down when wolves are around,” she said. She’s a musher herself, from Minneapolis, and said the same black wolf, along with a female, were seen last year, too.

As to the Roadtrek eTrek, except for one minor glitch due to the cold, we couldn’t be more pleased.

On the advice of locals, I used a blend of the normal #2 diesel fuel with the hotter burning #1 to handle the extreme cold. I used about a 60% #1 blend. Some stations let you mix it yourself from adjacent pumps, others up here sell it blended 50-50. Either way, the #1 helps prevent diesel gelling, which can shut down an engine that starts up after having been sitting all night in the cold.

But… all was not without incident. When I went to start it this morning – it got down to -23F here last night with a -55F wind chill – the engine turned over but did not catch. The starter battery seemed low and it cranked very slowly. I called a local garage that works on diesel and Greg, the owner, came to the motel with a huge tow truck. It took him all but five minutes to hitch the Roadtrek up and haul it to his warm garage where he got a rapid charger on the battery and thawed out the engine a bit.

“The cold just sapped the battery to where it had trouble cranking and the oil got pretty stiff with that severe cold we had last night, ” said Mike, the mechanic who worked on it. “It just needed to be warmed up a bit.”

We were on the road by noon.

Other than that, the Roadtrek performed flawlessly. I have become a huge fan of the Sprinter chassis and Mercedes engine. The vehicle handles well on ice and snow. And I’ve already raved about the Webasto heater Roadtrek has. Mine has been running continuously since Friday. It’s now Monday morning and we are in Ironwood, MI, in the Upper Peninsula. We stayed in a hotel last night so we could shower. The heater stayed on all night.

The heater runs on diesel from the engine. Based on our use, I would say that four days of running it has not used any more than two gallons of fuel.

The only downside I can think of about this is you can’t use running water – the Roadtrek is winterized. You can use the toilet…just flush it with RV antifreeze. Ad finding room for the extra clothing – parkas, boots, hats, gloves, insulated bibs, etc. – can also be challenging.

I realize the cold and winter camping is not for everyone. That’s okay. That’s why God made Florida and the southwest.

But Jennifer and I are still healthy and we absolutely love the outdoors and the wilderness. And seeing this country in the winter, covered with a pristine blanket of snow, is soul-soothing.

In fact, Jennifer thinks it was one of the top most enjoyable boondocking. 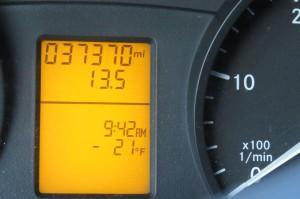 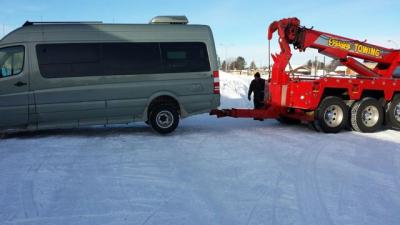