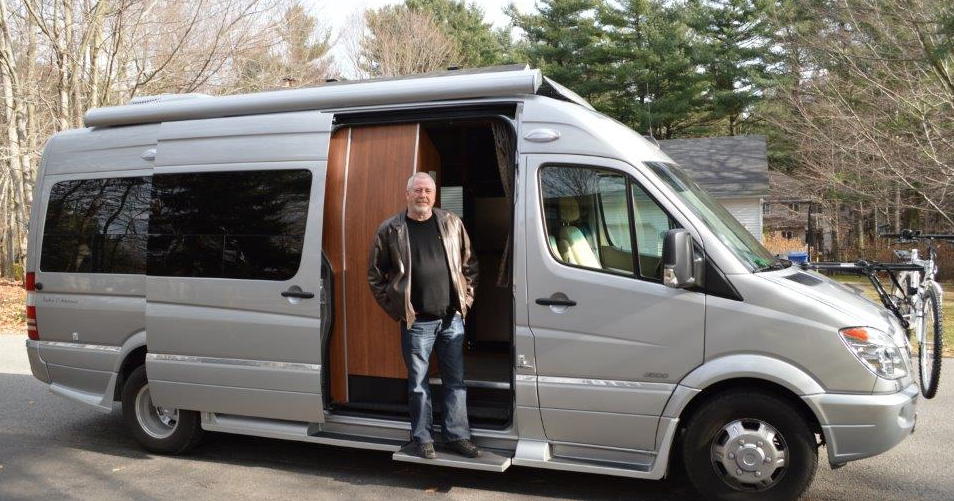 It was the morning of Tuesday Jan. 28, and he was staying at a Hampton Inn in Lakeland, FL He looked out his hotel room window and saw an empty parking spot where he had parked the brand new Roadtrek CS Adventurous the night before.

“I thought maybe the hotel had towed it for some reason,” he said. “So I ran down to the desk and asked them. The clerk said no. Then one of their workers came in and said there was all sorts of broken glass out on the asphalt.”

The glass was where he had parked.

His beautiful new motorhome, bought just last October, had been stolen. Thieves had smashed the passenger window, found a spare set of keys he had hidden inside and taken off. Surveillance cameras from the hotel showed the two thieves in action. They smashed the window at 4:56 AM. They drove out at 5:05 AM

The Dalkeith, Ontario, Canada native was traveling alone, living his retirement dream. He had been enjoying the weather in Florida after a 5,000 mile shakedown trip that took him through the western United States. He was in Lakeland to get some service done on his Roadtrek and took a hotel room because he couldn’t find a nearby RV park.

He called the police as soon as he discovered the theft. An alert was sent throughout the south to law enforcement agencies. Roadtrek user groups and social media pages posted the picture of George’s CS.

No one held out much hope. Many thought it would go straight to a chop shop.

Fortunately, it didn’t. The thieves drove it around about 200 miles and abandoned it in Lakeland. It was recovered Friday, four days after it was stolen. Police never did find the thieves, though the investigation is continuing. The inside was left a mess of black fingerprint powder put down as part of the police investigation.

“They took everything except my underwear, socks and dress clothes,” said the 67-year-old George, a divorced father of a 40-year-old son and a grandfather of two young girls, 15 and 11. “They cleaned it out. They got my computer, my iPad, my golf shirts, the bicycle on the front, pretty much everything. I read your blog and got the same GPS you recommend and even the same mattress topper you and your wife suggested from Bed, Bath and Beyond. They got that, too.”

The theft was not the only setback George has had with his new RV.

In December, at the Grand Canyon, he pulled into a ranger’s station to get an annual pass.

“It’s a good thing I did because when I put my foot to the brake, it went all the way down to the floor. Thank God I found it out there at the ranger station. I was able to use the parking brake to stop. But if I had gone a couple more miles, there was a six percent downhill grade. No way would I have stopped.”

George says his right front brake line became unseated from the brake line holder. That allowed the line to contact the exhaust has recirculation (EGR) tube and resulted in a hole in the brake line.

Roadtrek has issued a recall for the problem, which involves an estimated 61 vehicles built on the Sprinter platform from February 14, 2013 through December 20, 2013.

“That brake deal turned out to be a mess,”said George. “I had to be towed more than 200 miles to Phoenix to get that fixed at a Mercedes dealer.” Road service has handled the cost.

George is currently in Sarasota, FL. His CS Adventurous is at a Mercedes dealer there, waiting for the broken passenger window to be replaced. He is using the down time to sort out his insurance claim for the items stolen from his motorhome. Despite the hassles, he is still upbeat about his Roadtrek and his new life on the road.

He retired last fall, selling two businesses involved in commercial and industrial natural gas service back in Ontario. He plans to travel North America for four and five months at a time. He still has a fruit farm back in Dalkeith, a small town located about halfway between Ottawa and Montreal and he will return there each summer and early fall.

“I know I’ve had a spell of bad luck,” he concedes. “But I’m just being as patient as I can be. I just want to get back out on the road. I’ve been looking forward to this stage of my life for a long time.” 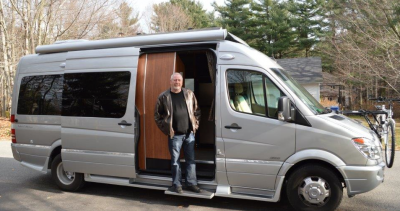 Dennis George and his new CS Adventurous – before the theft 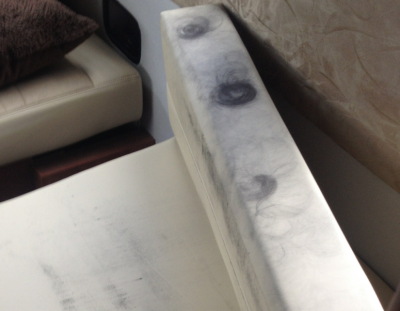 The police didn’t bother to clean up after themselves, either. 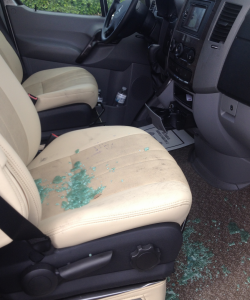