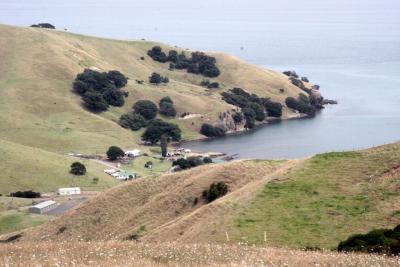 The Coromandel Peninsula is a favorite holiday area for the Auckland area. It is just a couple of hours drive from Auckland to the southern end of the peninsula. There is hardly a straight road anywhere in the Coromandel. To the west lies the Hauraki Gulf and to the east is the Pacific Ocean. So this is similar in some ways to Florida but it is also dissimilar in many ways. Primary among these is that the Coromandel is mountainous and has some indications of volcanic activity in its many hot springs. In 1852 gold was discovered in the Coromandel Peninsula and a gold rush was on. As with most gold rushes, they don’t last long and things quieted down for a while. Eventually tourists discovered the peninsula and it remains popular with locals and tourists.

We stayed at a small park in Thames on Tuesday night. Wednesday we began our drive north along the western shore. The road was literally on the shore of the Firth of Thames. Driving north meant that we were in the lane right next to the water. There were places where the white line on the road marked the edge of the Earth as Louise described it. We were never at great height above the water but disaster was never far away. The road curved in and out of every bay and inlet. There were houses on the landward side of the road in little communities and an occasional park on the seaward side of the road. Log trucks and places where the road narrowed beyond the normal road kept me on my toes. We stopped where there were pull-outs to take pictures and marvel at the view. There were also slow moving vehicle bays which allowed us to pull over and let faster traffic continue on their way. Now instead of getting honked at, I’m getting thank you toots from the drivers.

We stopped for lunch at a nice seaside park and ended up spending an hour watching some of the birds in the area. Shortly after lunch the road rose up into the mountains. Scenery was everywhere. We had views of the seashore, small towns along the coast, wonderful rich forest growth and farmland.

As the afternoon went on we neared our destination for the night, Hot Water Beach. This is a well-known tourist attraction. A hot spring near the beach floods the beach with hot water. Dig a hole in the sand at low tide and you can sit in a pool of hot spring water. All the holes fill in as the high tide washes everything back to its prior state. We checked in at the TOP 10 Holiday Park just a short walk from the beach. Since it was low tide we decided to make our way to the beach immediately. Shovels weren’t available at the holiday park but the desk attendant suggested we could just take pools dug by others this late in the day. That worked fine. We found one pool then moved to a warmer pool when its occupants left and finally to a really hot pool. We’re lying in sand and water and our swim suits filled with sand. Even a dip in the ocean didn’t remove anywhere near all the sand. We brought a significant part of the beach back to the holiday park!

The following morning Louise was off to the Laundromat early in the morning. She filled three machines with laundry and was just about finished when it started to rain – hard. I had almost finished preparations for our leaving the park when the rain started. The rain began to subside and I was preparing to unplug and go pick up Louise. As I went the door, she came down the street lugging the laundry. After hanging up the almost dry laundry and stowing the rest we were on the road south to get groceries and then on to the town of Rotorua. We were really glad we had taken advantage of the dry afternoon before to go to the beach. This day was not going to be a good beach day.