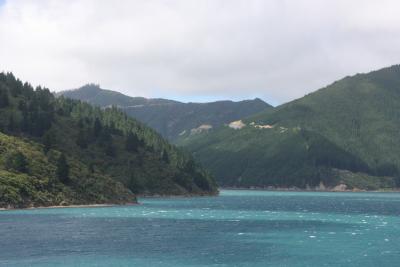 February 11 we left Blenheim on Highway 6 which runs up the Wairau River valley. This river drains the eastern side of the mountains. Its valley is wide and straight, formed by ancient glaciers and now filled with the silt and sand of those glaciers. As we drove up the valley the vineyards gave way to sheep and cattle grazing land. We stopped at Nelson Lakes National Park to hike for a while. After the Visitors Center and gift shop, we went on to hike a trail partway around one of the lakes. I called the forest a black forest as all of the trees had a black fungus growing on their bark. We spotted several birds we had never seen before and got acquainted with the sand flies which are the major pest in New Zealand. They like the shade and we were in the shade. They really liked us!

Leaving Nelson Lakes National Park we continued on to the Buller River and followed it through its upper and lower gorge. These gorges were absolutely spectacular. The forest growth could only be described as genuine rain forest. At times both sides of the road were lined with ferns and fern trees for long stretches. It gave the roadway a real garden look. Travel was slow as we followed the river channel. Along the way we stopped at overlooks down into the river channel far below. We crossed numerous single lane bridges. Finally we arrived at Westport on the Tasman Sea, the west coast of the South Island. Our camp host welcomed us and gave us suggestions for our next day of exploring.