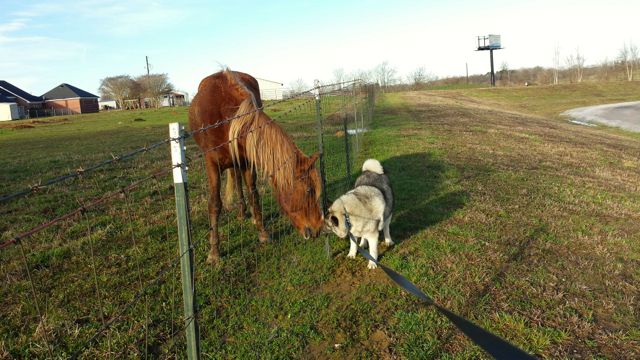 So far this year, Tai has had his hackles raised by a wolf in northeastern Minnesota, been terrorized by a Chihuahua and yesterday in Alabama, he came snout to snout with a horse. But when we arrived at Pogo’s pre Mardi Gras “Smokin’ on the Bayou” Roadtrek gathering in Gautier, MS, he seemed rather indifferent to all the excitement of a dozen plus Roadtrekers coming together. Instead, he opted to just hang out on the rug outside his Roadtrek. Alone, if you don’t mind.

His breed is known for its independence, the breeeders we have met over the years have told us. Tai is our Third Norwegian Elkhound and I think they use independent as a euphemism for stubborn. Tai definitely saunters to the beat of his own drum. In fact, that’s just what he did yesterday when a large group of us, along with four dogs had congregated on Laura Robinson’s campsite around the corner from our spot here at Shepard State Park: Tai snubbed them all and sauntered home, choosing to park his double-coated, curly-tailed butt outside our eTrek.

He did stop along the way to visit Ellie and Phil and Kathy and Les, where he was the only dog and got some serious pets. Maybe he just needed a rest.

Later, after we all caravanned over to a local restaurant and came back to start a bonfire at Laura’s, I tried to take Tai down there. He refused to go, stopping in the middle of the road at the end of his leash. I could have forced him of corse. But why bother. He wanted to go back to his own Roadtrek, where he promptly went inside and to sleep.

I’d say he was exhausted from the 1,050 mile trip down here from Michigan. But he slept the entire way, so that can’t be it. And I know he’s healthy. He had his annual checkup at the Vet just this past Monday.

We often wonder how much he enjoys our Roadtreking adventures and debate whether it would be best to leave him with relatives. That is, in fact, what we will do after this weekend. We’ll leave him at my son’s home in Georgia as Jen and I head down to Florida for a couple of stories. The temperature down towards Naples where we are headed will be in the 80′s and Tai is still in full winter coat. That, we think, is too warm for him.

Dog experts I’ve talked to tell me dogs like routine and familiarity and assure me he’d rather be with us, his own people. Tai seems to have bonded well with the Roadtrek and indeed, perks up his ears when I ask him, “wanna go in the Roadtrek?”

So I guess we should count our blessings that Tai is a low maintenance dog. 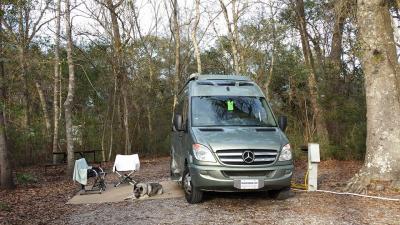 Tai at our Shepard State Park site in Gautier, Miss.