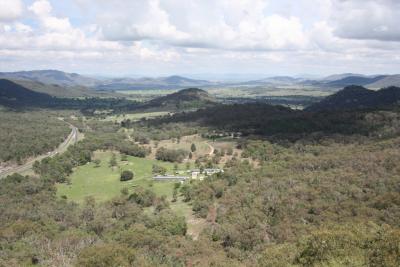 We started our first day on the New England Highway with a visit to the yellow i. That is what I call the visitor’s center here which are identified on the blue signs with a simple i for information. Many of these are commercial operations, others are operated by the community. I suspect that if you pay the state or national government your money, you too can be an i. They all have a variety of brochures on the local activities and some regional activities. They tend to be pretty parochial, having only those things nearby and the brochures do not include brochures from other states even when they are relatively close by.

Tamworth’s claim to fame is a country music festival which is held in town each January, early summer here in Australia. It started in 1972 with a local radio DJ putting together a small gathering of local country music stars. Held on a weekend, it attracted a good crowd so the festival grew. Today, they have a 10 day festival, two weekends and the week in between. The festival is now held at several locations throughout town and people come in flocks to see big name stars including many from the US. The town hosts the Australian Country Music Gallery of Stars with the great ones recognized with wax statues. Tamworth is also an equestrian center with the Quarter Horse Association and Appaloosa Association headquartered in town.

We visited with one of the aides at the visitor’s center who could have talked all day about the country music festival. When we left, we decided to walk around town. There was a walking trail that started at the visitor’s center and ran along the top of the Peel River levee which separated the town from the river. At the campground we had seen pictures of the river in flood so we understood the need for the levee. On the town side of the levee was a park which included sculpture, gardens, memorials and fountains. As in many of the city parks we have seen in our travels this summer, the park was alive with people walking dogs, riding bicycles, mothers with children, elderly people walking and dozing. It was a wonderful cross section of Australian society.

From there we drove north out of town on the New England Highway. Our first stop was at the top of a long grade about 15 kilometers north Tamworth. A sign indicated a scenic overlook. We turned off and were rewarded with a quite spectacular viewpoint. Unlike some viewpoints where you peer through the trees that have grown up, this viewpoint was a platform atop a 30 foot diameter boulder of granite. Built in 1938, it was a county (they call them shires) project. There were steps of concrete up one side of the boulder. Those led to two platforms, one at an intermediate level and another on top of the boulder. From there you could look out on the valley all the way back to Tamworth. You could see forests, fields, horse farms and small communities all laid out in this luscious green valley. We delighted in seeing a pair of Crimson Rosella, parrots with bright red bodies and blue, yellow and green wings and heads. They were cavorting in a tree right next to the intermediate platform. Parrots are fun to watch, they readily turn upside down and pick fruit or seeds from the trees. Their colors make them a feast for the eyes. Their calls will rattle your ears.

We continued on enjoying the scenery along the road until we reached the town of Guyra where we stopped for the Mother of Ducks Wildlife Preserve. This was just off the road and sounded very interesting. Arriving there we saw that people were camping there. We joined them parking in the most level spot that we could find. This was free camping as it is called in New Zealand and Australia. There was no electric, no internet and no fee. Our campervan has limited battery and no generator so we would be going to bed with the chickens or perhaps I should say ducks.

I enjoyed a walk around the area, following a stream channel for some distance before it looped back toward the camping area. I didn’t see a duck but heard a constant chorus of frogs. In the camping area I visited with one of the other people in the campground. He knew the area and told me that in normal times, the entire area here would be underwater but that this had been a very dry year and so there was a poor showing of ducks this year.

This place turned out to be quiet and an excellent place to stay for the night. It was a warm night and we slept with the windows and roof vents open. In the morning the birds woke us. There are many noisy birds in Australia, crows, magpies, parrots and cockatoos to name just a few. We’re working to identify as many as we can and having a great time doing it. I spotted a small yellow bird working in the bushes near our campervan and was able to identify it as a silvereye. It’s identifying feature being a prominent bright white ring around its eye.