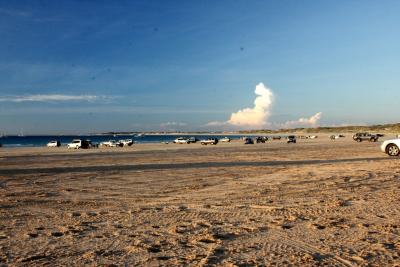 Our last day in Broome was a beach day. We drove to the beach about 11:00 a.m. and parked the motor home on solid sand at the upper part of the beach. Cable Beach is a large beach that stretches from near downtown Broome on the west coast for twenty kilometers. We were on Gantheaume Bay on the Indian Ocean. Waters were quite warm and the surf was mild, waves less than two feet made for a fun beach.

There were vehicles all over the beach, many with boat trailers. This was a great swimming beach but locals also used it as a boat launch. It was interesting to watch them launch and trailer their boats from this shallow beach. But first, we wanted to get into the water. There are crocodiles in this area and most areas with crocodiles have strong cautions about staying out of the water. The reading we had done on Broome indicated that crocodiles were not a concern so we anticipated being able to swim here. There were several couples wading in the surf so we inquired. They were local and said there was no problem. So in we went, walking, wading into the mild surf and then getting out into deeper water to swim. We left the US in January and hadn’t been out in the water swimming since then. Under the tropical sun I called a stop after about 20 minutes. We retreated to the campervan and set up our chairs in the shade of the campervan. Louise fixed lunch and we had a light lunch.

There was a steady breeze and warm temperatures which made for a great afternoon of people watching from the shade of the campervan. We saw boats being trailered while in the water with a tow rope to pull the trailer from the water. Others would back their four wheel drive out into the surf and load the boat onto their trailer at that point. It was still necessary for someone to wrestle the boat onto the trailer and pull the bow down until the ratchet could be used to draw the boat into its travel position on the trailer. One of the most unique was the boat that had three wheels, two at the stern and one on the bow. Once the boat was in shallow water, the wheels were lowered and you just drove the boat onto the shore. It could be driven forward or backward, it was steerable and if someone wanted to join you just lift the wheels until the boat was sitting on the sand. Once your passenger joined you the boat could be put back up on its wheels and driven into the surf to go out once more.

Besides boats there were many sunbathers and swimmers. In mid-afternoon a couple of wind surfers showed up and they entertained us for the rest of the afternoon. A few people brought their dogs to the beach and let them run in the surf. Late in the afternoon one of the water jet devices arrived and we watched the operator rising up into the air supported by jets of water sprayed from nozzles on the platform they stood on. If you haven’t seen this device, it has a pump that floats on the water and is connected to the operator’s platform by two hoses and a control cable. The hoses connect to two nozzles which spray water down which raises the platform with the rider. It is sometimes referred to as a James Bond hovercraft.

As sunset approached everybody and their dog showed up to watch the sun set over the bay. With the sun fading we went back for another swim then returned to the chairs to wait for the grand finale. We were not disappointed as there was a fine sunset over the water.