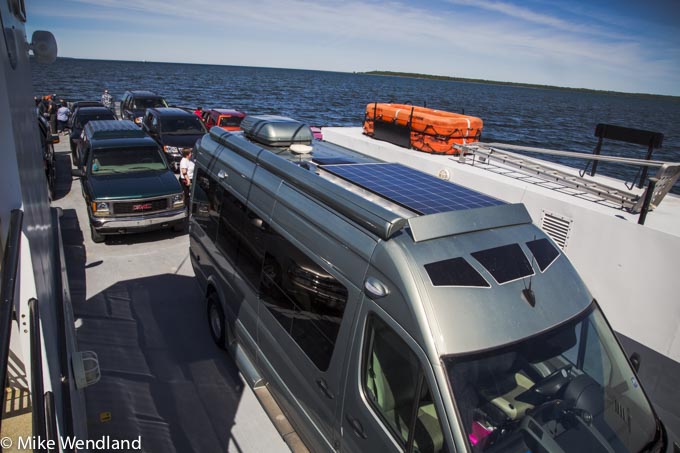 Scratch another place off my bucket list: Bois Blanc Island, in the middle of Michigan’s Straits of Mackinac, half way between the Upper Peninsula and the Lower.

As we were rounding the Lake Huron shoreline of the Michigan Mitt and driving through the northeastern town of Cheboygan on our Verizon Great Lakes Shoreline Tour, we saw a sign that directed us to the ferry dock.

The Straits of Mackinac were right off our righthand side as we made our way north on US 23 but this ferry was not for Mackinac Island – Michigan’s most popular tourist destination – but for Bois Blanc Island, called by the locals “Bob lo.”

It was calling to me big time. Now it was time to visit. After all, unlike Mackinac Island, motor vehicles are allowed on Bois Blanc. That meant it had shoreline to drive.

So we made a spur of the moment decision: Let’s Go!

We loaded our Roadtrek Etrek motorhome on the ferry operated by Plaunt Transportation. Round trip for two adults and the Roadtrek was about $96, cash only. Forty-five minutes later, we pulled off into a different world.

With a fulltime population of about 60 and measuring roughly 12 miles long and six miles wide, the island has no paved roads, no traffic signals and few stop signs. Deer outnumber permanent residents by about 20 to one. We saw deeralmost everywhere we looked. People, not so much. That was just fine for us.

Cottages and summer homes help push the summertime population to a couple of thousand. But during our visit, the only time we saw other people was when we passed the bar or visited Hawks Landing, the combination general store-restaurant- gas station and real estate office that serves as the island’s nerve center.

It was at Hawks that we found a place to camp, owned by one of the locals and a few miles down the shoreline. They even had a 30 amp power hookup and water to boot. Truthfully, we probably could have stayed anywhere. There were numerous spots to pull off, right on the coast. On the northern end of the island there was another spot, without hookups, that we could have stayed for free. But it was surrounded by cedars and the mosquitos and tiny, biting black flies were congregated there out of the wind. We decided to go for the paid spot on the south side.

Even there, we had mosquitoes trying to get inside. Check this video:

Think they don’t do damage? Check this video. I shot this the next day when we returned to the mainland and I got a hotel room to get some relief from the insects.

Truthfully, as beautiful as Bois Blanc was, the bugs in late June were so bad that we wished we hadn’t come.

Later in the summer when they die down or, better yet in the fall when a killing frost puts them away for good, would be a better time to visit.

There’s some disagreement over the name. Bois Blanc means “white wood” in French. The color of the prevalent birch tree bark and the basswood tree’s white under bark that was extensively used by Native Americans and the French-speaking fur traders who first came to the island to make canoes.

They have as long as anyone can remember. The term is believed to be an English corruption of the French pronunciation of the name.

The Great Lakes has several other islands called Bois Blanc, including one in the Detroit River that used to be the location of a popular amusement park. All those other Bois Blancs are also called Bob Lo by the locals.

At any rate, except for the bugs, we found the place to be delightfully low-keyed and out of the way place. What it lacked in amenities, it more than made up for in tranquility, beauty and a jaw-dropping display of stars in a sky totally devoid of light pollution.

If only the bugs had left us alone 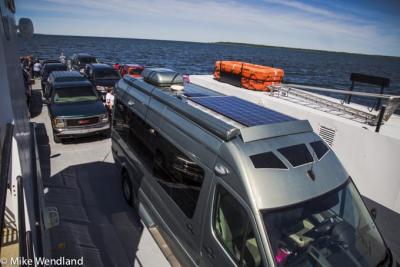 A roundtrip to Bois Blanc Island cost $96 for two adults and the Roadtrek.

Tai loved being free on the deserted beaches. 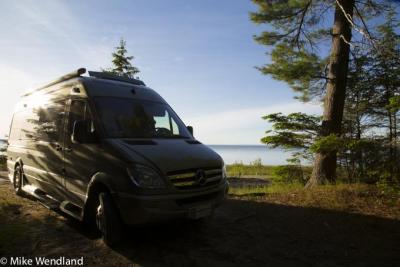 This is one camping spot on the north side. It’s a great boondocking place but the mosquitoes were so bad we moved to the south shore. They were bad there, too, just not as bad.