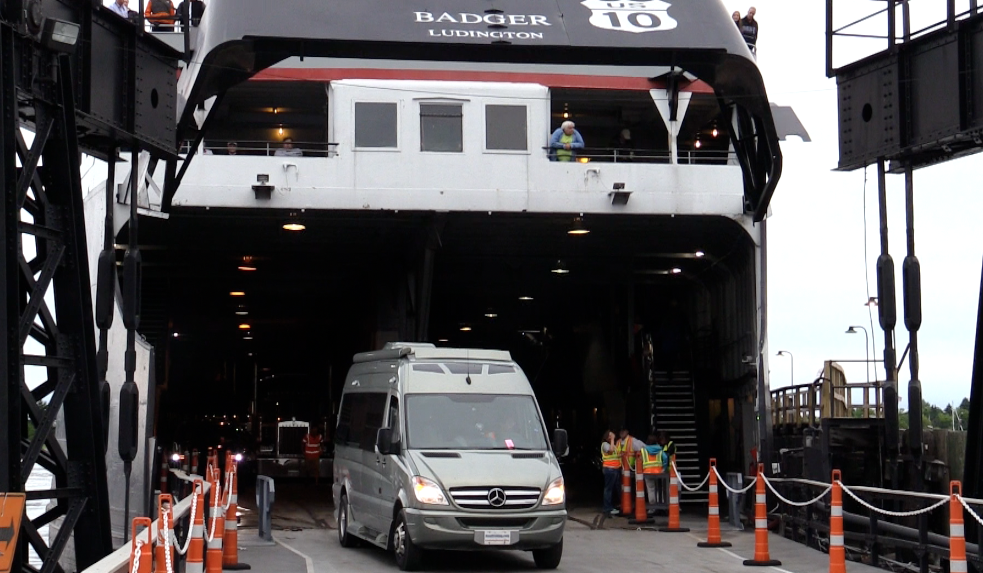 Our Roadtrek Etrek now has its sea legs.

Sometimes, to really appreciate something, you have to immerse yourself in it.

So it was with Lake Michigan as we’ve been traveling around the Great Lakes Region these past several weeks on our Verizon Great Lakes Shoreline Roadtreking tour.

No, we didn’t go swimming in it. The heavy ice up this past winter has left it and the other four Great lakes, abnormally cold. And normal is cold. This summer, it is really cold.

So instead of getting wet in the lake, we crossed it.

Bright and early on a recent Wednesday morning, our Roadtrek Etrek motorhome backed aboard the SS Badger, the largest car ferry steamship in the Great Lakes, measuring over 410 feet and able to hold 180 vehicles and 600 passengers.

We took the 8:30 a.m. crossing, arriving the night before and boondocking in the Roadtrek in the carferry parking lot in Ludington.

On the day we crossed, it was about half full. The ferryboat line suggests you call ahead to let them know you’re coming, especially if you are traveling in an RV. Size is not a problem. They seldom run out of room. They just like to know what to expect. On the day we crossed, there were Class A, Class C and Class B motorhomes aboard. There was even a huge truck semi-tractor trailer combo.

We had Tai with us. Dogs are not allowed on the upper deck passenger areas. There are kennels for pets down in the vehicle parking area but most people chose to do what we did, crack a window and leave their pets in their vehicle. Tai slept soundly in the Roadtrek. There’s a fresh sea breeze down there so heat is not an issue.

Our route traveled 60 miles in a straight line across Lake Michigan from Ludington, MI to Manitowoc, WI. Passengers sped their time doing all sorts of things. On nice days, they sun themselves on the forward deck. Inside, the ship offers bingo, movies, a arcade, TV and even satellite Internet Wi-Fi.

Jennifer and I were given a bow to stern tour of the big ship – in consideration to be a National Historic Landmark.

In the engine room, the massive steam engines run so smooth you can balance a nickel on them.

To really appreciate the size of Lake Michigan, you need to be in the middle of it. It fills the horizon, as far as you can see in any direction, the only Great Lake entirely within the United States, touching the borders of four states.

We even had a stateroom aboard the Badger. I grabbed an hour long nap as the big ship cut across two and three foot waves. I slept like a baby, rocked gently by the ship.

How much does it cost to cross? Check out the schedules and fares page for the Badger. Our Roadtrek was considered a van. That’s $132 for a round trip. We elected for one-way as we did some exploring down the Wisconsin coast and hit Illinois and Indiana. The one-way cost is $66. Bigger Class C and Cass A RVs are usually priced by the foot, $5.95 per foot one way, $11.90 a foot round trip. That’s the same rate for passengers – $66 one-way. Seniors get a slight break at $62.

There’s no charge for pets.

The ship itself has a rich history.

Today, it is the only coal-fired steamship in operation in the United States and has a unique propulsion system that has been designated as a national mechanical engineering landmark. It entered service in 1953, designed specifically to handle the rough conditions that it would likely encounter during year ’round sailing on Lake Michigan.

Built primarily to transport railroad freight cars, but with lots of passenger accommodations, the Badger reigned as Queen of the Lakes during the car ferries’ Golden Era in the late Fifties, with Manitowoc, Milwaukee, and Kewaunee as her Wisconsin ports of call. By the Seventies, changing railroad economics were condemning other car ferries to mothballs or the scrap yard. With little railroad freight business left, and without ever tapping into the opportunity to serve the needs of the vacation traveler, the Badger sailed from Wisconsin to Ludington and tied up for the last time in November 1990 – signaling the end of the century-old tradition of car ferry service on Lake Michigan.

The demise of the car ferries was devastating to the communities they had served. It seemed that the magic of these wonderful ships would only live in memory, never to be experienced by future generations. However, in 1991, an entrepreneur named Charles Conrad committed his own financial resources to reinvent the S.S. Badger to carry leisure passengers and their vehicles.

Since then, this legend of the Great Lakes has delighted a whole new generation of people, allowing them to experience a bit of history that almost slipped away while cruising to fun destinations on both sides of Lake Michigan. The S.S. Badger now sails daily between Manitowoc, Wisconsin and Ludington, Michigan from mid-May through mid-October. 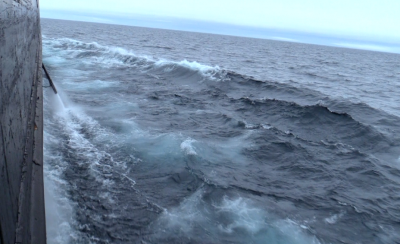 The SS Badger is 412 feet long and can handle any sized RV.