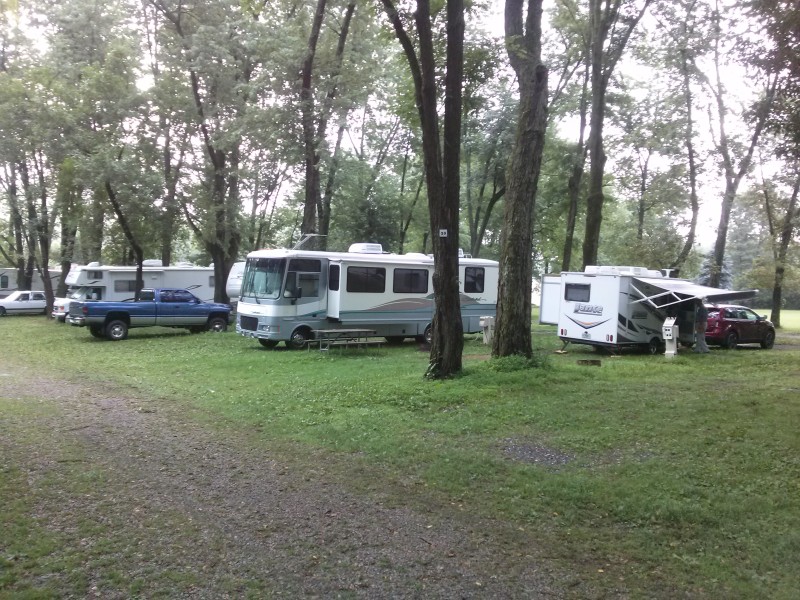 Since I wanted to avoid the NJ Turnpike, we went home via I-476/Pennsylvania Turnpike, west of Philadelphia. This is an OLD turnpike, which is very narrow. Much of it is under reconstruction - it should be better when finished. The right lane had bumpy drainage structures in it, so I drove mostly in the left lane. Meanwhile, the signs and their supports, that were mounted on the median barrier, were scary close. The only thing about this route that was better than the New Jersey Turnpike was that you had to put up with the misery for a few less miles.

Heading north on I-476, we saw warnings about a tunnel coming up. We got off at a rest area to study alternative routes. It turns out that the tunnel in question was just north of our intended exit to I-78 anyway. Heavy rain and thundershowers were in the forecast. We found them just east of Allentown, PA.

I had searched our Woodall's directory for a campground along I-78. I found Jugtown Mountain Campsites. While this campground is fairly easy to find and get to from I-78, and has quite a RV and Trailer parts store, it does not have much else to recommend it. When I checked in, the guy circled an area on the campground map and said he thought I could find a space somewhere in that area. Most of the area he indicated was filled, but I did find a site. This place was poorly maintained and the pool was closed. There were several older trailers there that looked like they were abandoned. There were no signs indicating where the dump station was. I found it by exploring. I went into one of the restrooms. It was filthy - the worst I've ever seen at a campground. It's too bad, really. With some maintenance and proper management, this could be a nice campground. We had more heavy showers in the evening. I was glad we had stopped relatively early. I guess the best I can say about Jugtown Mountain is "Any port in a storm." I recommend you avoid this place. I later found some online reviews. I'm not the only one who had negative comments about Jugtown Mountain.

While at Cherry Hill Park, I found a copy the RV Gypsy Journal. One of the articles in this paper reported on free places to park overnight. One of these was the Danbury CT Welcome Center. Since we were going through Danbury, I decided to check it our for possible use in the future. This was basically a rest area. There was a building there with rest room and vending machines. No gas, no restaurant. However, then had a nice parking area for RV's and Busses that was separate from the truck parking area (though a couple of trucks were using it when we got there). They even had a free RV dump station! The place was neat and clean. Nice! We just may overnight there on some future trip.

The supply of food in the fridge was getting low, so we decided to eat lunch out. We had a bit of trouble finding a restaurant in Danbury where we could park our RV. We went by a steakhouse with adequate parking, but that was not the type of place we were looking for. Eventually, we found our way to the Danbury Mall and a Panera's. The parking lot was not the best for maneuvering the MH, but we made it.

While we were eating, the rain started again. There was another very heavy thunderstorm as we left Danbury.

We stopped for gas in Chelmsford, MA. We chose a station close to the exit. It was OK getting in, but it was hard to get out of. If we had been towing a car, we would not have made it. I had to back up twice in order to make the turn to the exit.

We were hit by more heavy thunderstorms, with wind gusts, as we left Chelmsford. They continued as we traveled through NH, and into Maine. The old Southwind was more solid feeling in the wind gusts than I would have expected. I had to react them some, but considering how bad the weather was, I did OK. We saw a couple of trees that were blown down. On past trips, we have had a few problems with a loose connection on the module that controls the windshield wipers. I thought maybe I had that licked, but we did lose the wipers for a minute or two. Then they came back. I've got to see if I can do more about that issue.

Somewhere on I-95 in New Hampshire, the "Service Engine Soon" light came on while driving in the heavy rain. The engine continued to run fine. I did find that upshifts from 3rd to 4th were a bit rougher than normal. I'll write another entry about what that turned out to be.

Our daughter cooked supper for us, and had it ready soon after we arrived. I was a great trip, but it's always good to get home.