If you're a music fan, chances are there's a music festival for your type of music. Attending a festival is a chance to see several artists performing up close and immerse yourself into the music for a few days. Camping at one is way to deepen your involvement with the artists, music, and other fans.

I'm a relative newcomer to Bluegrass music. I got interested in my early 40's when I heard Ricky Skaggs and his band Kentucky Thunder on an NPR radio program singing some old bluegrass tunes. I got hooked immediately. The high lonesome harmonies and string melodies hit a receptor in my body that made me crave to hear more.

Fast forward about 15 years. I'm now a bluegrass music junky. I've learned a lot about the music, the artists, the legends, taught myself to play the mandolin, and can't seem to get enough of this music. And now, its mid July and time to attend the Grey Fox Bluegrass Music Festival. This will be my 15th year. Its an annual gathering of bluegrass music fans and artists held the third week-end in July in upstate New York. For the past four days, I lived outside in the warm summer heat, danced till my feet hurt, sweated thru a couple of changes of clothes per day, became sleep deprived due to late nights, endured camping neighbors strumming and picking music all night, and had a thoroughly great time. I also heard some great music. 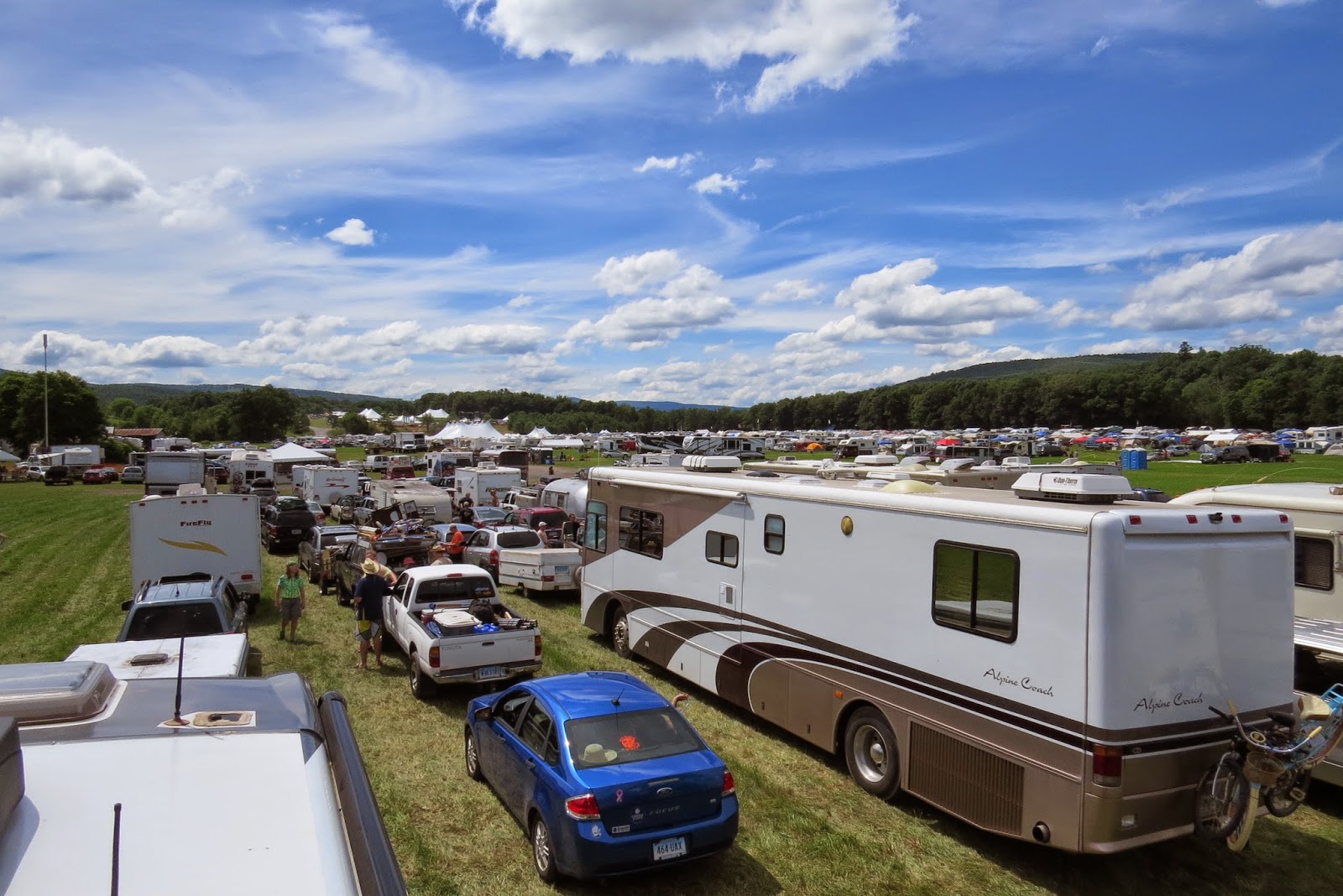 Lined up waiting to get into the festival grounds

This festival is held on a farm in Oak Hill, NY, a few miles south of Albany. On Wednesday, four thousand fans set up camp in a large hay field and created a temporary city of bluegrass music. We all settled in for four days of picking, strumming, singing, and good times. There are three performance stages for artists, workshops for attendees to take lessons, and a bluegrass music camp for children to learn to play bluegrass music. There's also a dance pavilion and numerous vendors selling food and merchandise. Day visitors added to the crowd which seemed to swell to about 8,000 each day. 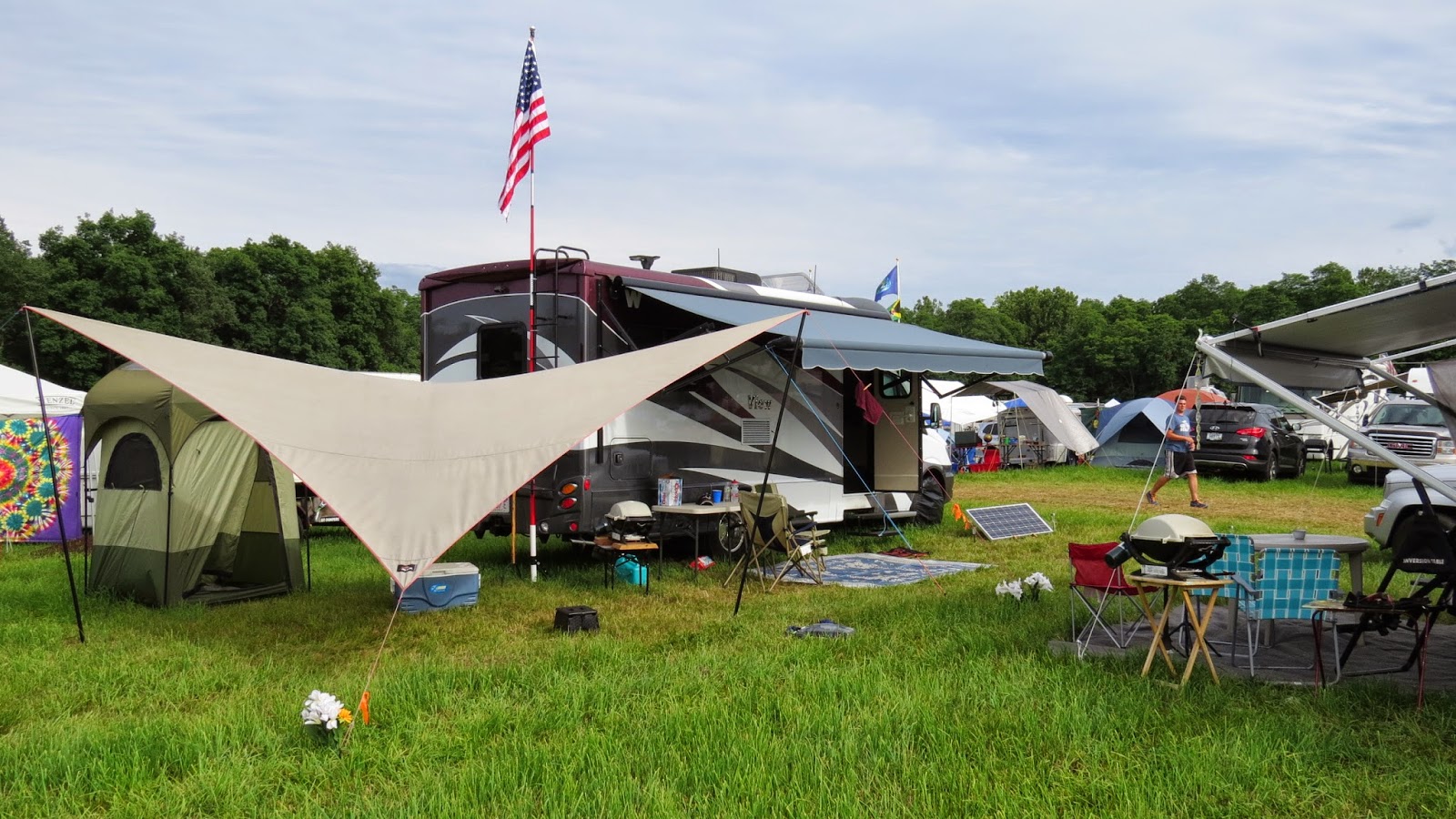 Camping at a music festival is a unique experience and it's not for everyone. At Grey Fox, camping is in an open hay field with no hookups or assigned sites. There are different sections such as Quiet Camping, Family Camping, Generatorville (for RV's with generators), and Pickers Paradise for the all night music enthusiasts. Regardless of the section, I camped shoulder to shoulder with others in a field with no shade or amenities. I pretty much had to bring everything I needed and that included food, lots of water, a shower for bathing, chairs, shade canopy, and ear plugs in order to get any sleep.

Like most folks, I started out tenting at Grey Fox, which can be pretty rustic. After about 9 years of tenting, I moved up to a tent trailer. This was my first year bringing my motor home to Grey Fox. I was little concerned about driving my RV in a field that had gotten a bit of rain over a few days prior to the festival. It was spongy but I was able to maneuver my small motor home around the field and find a nice level spot. I also got to try out my new solar setup. My 100 watt panel worked great at keeping my coach batteries charged during the day. I only had to run the generator a few times. Here's what it it looked like camped at the festival. 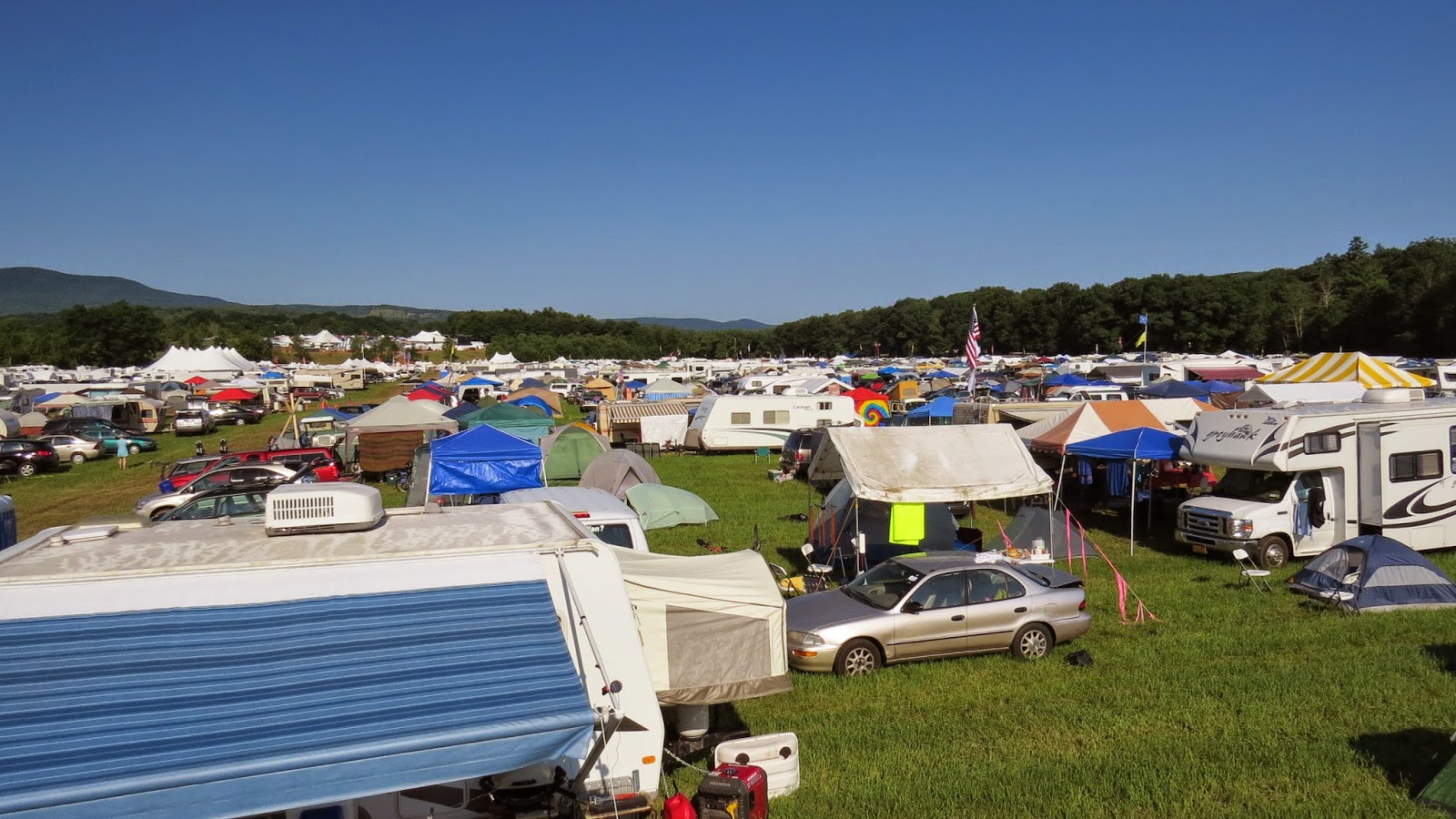 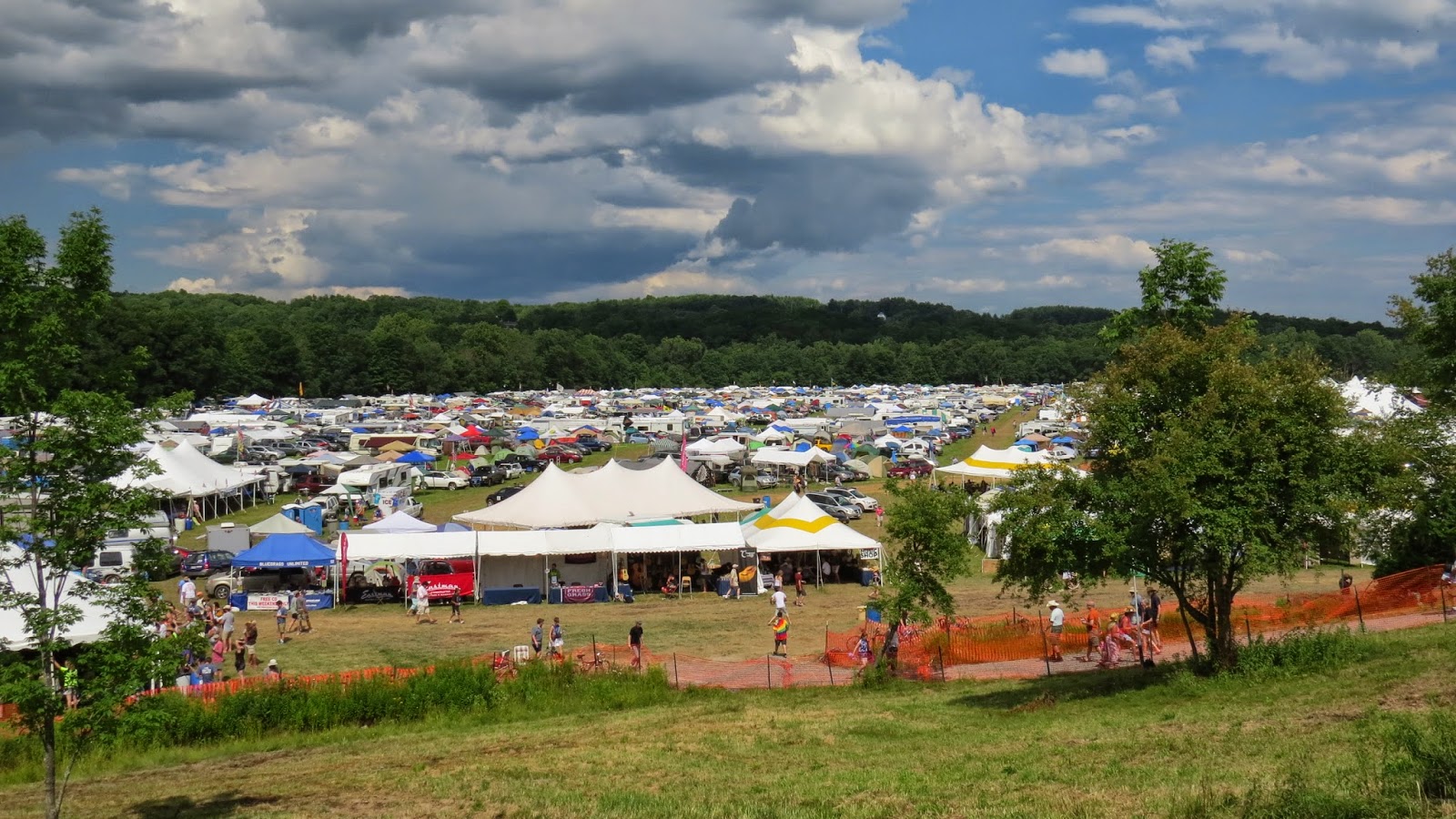 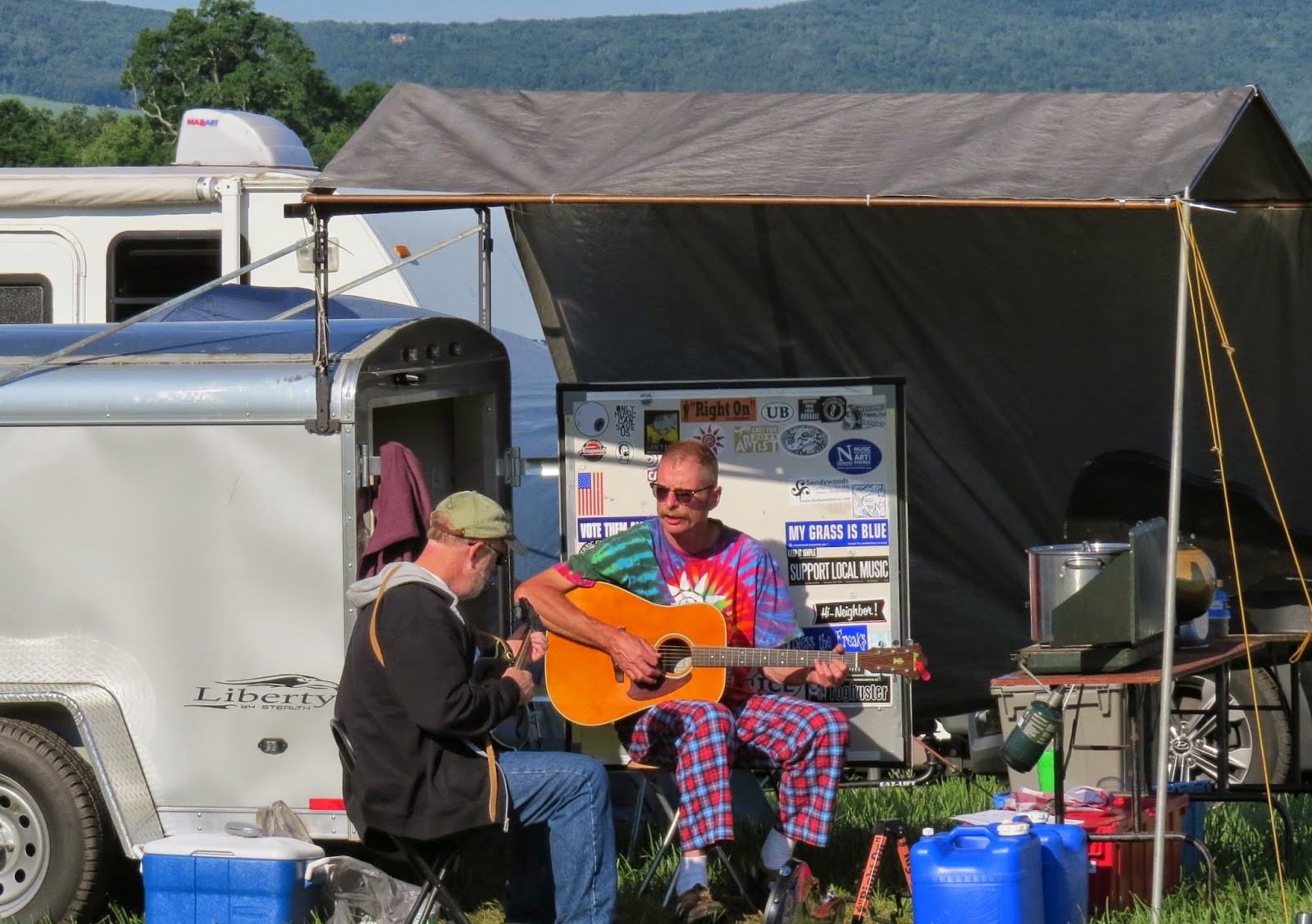 Camping at the festival is like a big tribal gathering. For me, its started out as an exploration. Now, I'm a member of the tribe. Its a big community of people, young and old, with similar interests. We all gather here to play music together, see and hear some great performances, dance, and have a good time. The people I've met over the years have all been great people. You can't help but meet folks, engage in conversation, and perhaps play some music. There's a "we're all in this together" attitude and everyone helps each other and shares.

One year, I worked as volunteer at the festival. Here's a link to a write up on that experience 2009 Grey Fox Memories.

The big draw for me is the music. Some of the biggest and best come to play this festival. I've seen some legends (Earl Scruggs, Jesse McReynolds, Hazel Dickens, Del McCoury), some of the biggest stars (Sam Bush, Rhonda Vincent, Marty Stuart) and lots of new artists.

This years festival was great. The weather was perfect with daytime temps in the low 80's. It was sunny each day with low humidity. At night, it cooled down into the mid the 50's. It was perfect sitting under the stars watching the music on the main stage.

The music seems to get better and better each year. I like to see the new acts with their new and different sounds. Town Mountain and Elephant Revival were especially good. Established acts such as Del McCoury, Tim O'Brien, Claire Lynch, The Steep Canyon Rangers, and Nickel Creek were great as always.

I got to see some of my friends who I've met over the years at the festival. It was great to visit with these folks and do some dancing at the dance pavilon. I also got to meet some new people, did some bluegrass picking, and learned some new songs.

Here are some pictures. 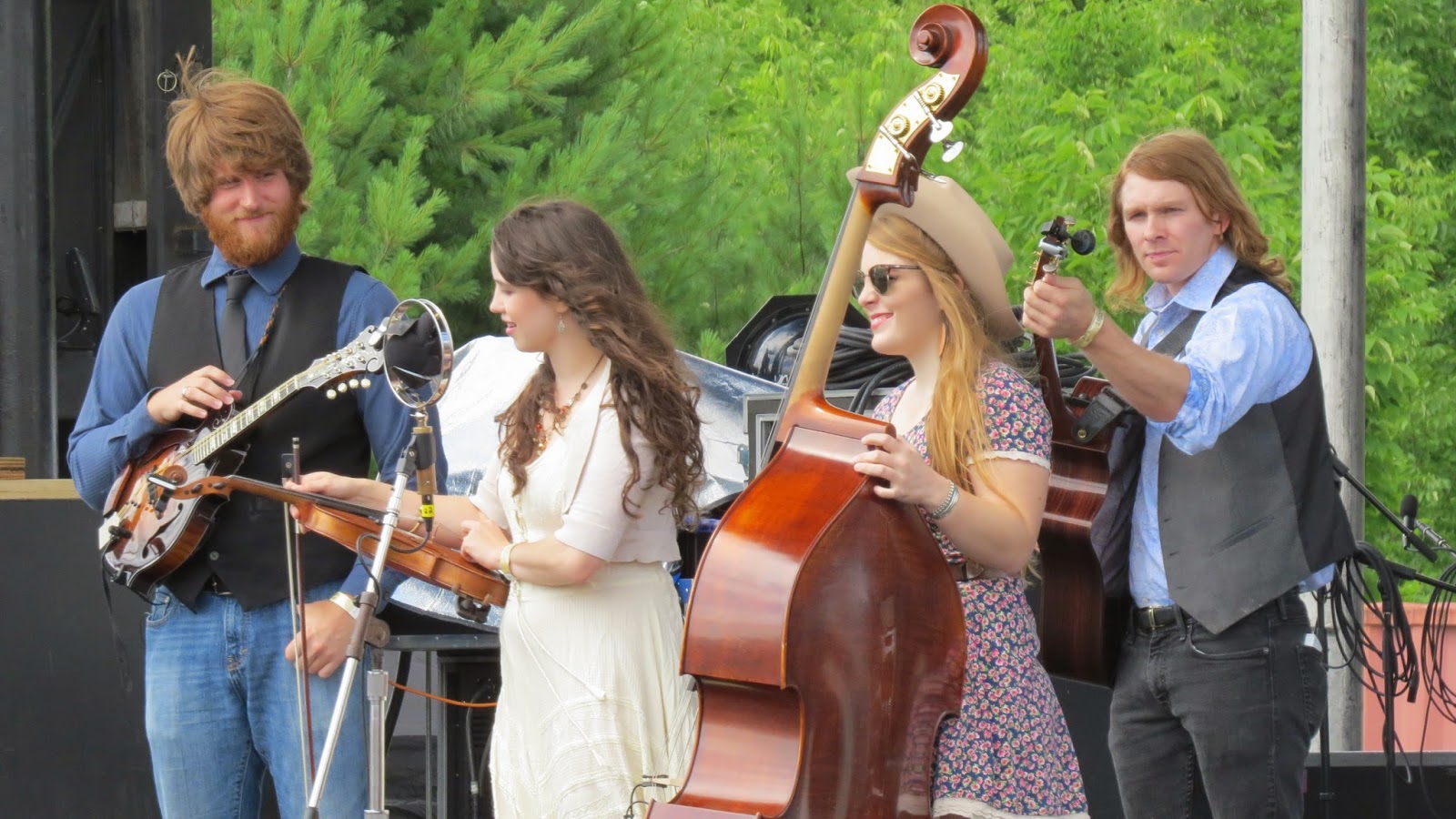 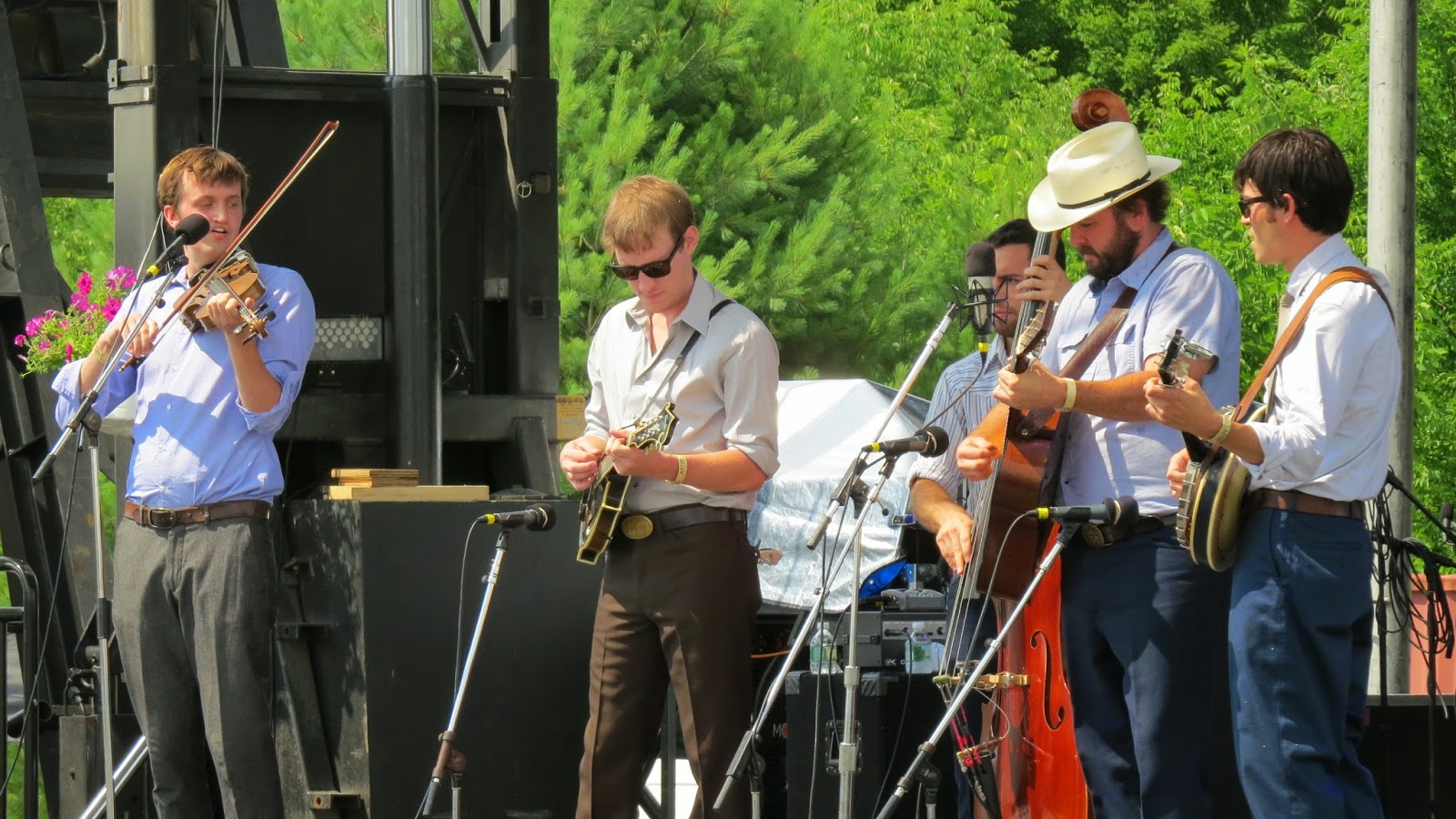 J. Dawg listening to the music

So, why do I keep coming back? Well, the music is an obvious answer. A chance to see a legend perform or to hear a new group. There's a chance to learn something new from an artist at a workshop, to pick some new tunes with new people, or see someone us close at the Masters Stage. A chance to see friends from last year or meet some new people. But, its also a chance to get a big dose of humanity. As a bluegrass music fan, its a chance to be "with my people". Whether its on a stage or a group camped next to you - this music is alive. Its not some synthesized, lip synced, manufactured, or electric sound. Its being performed mostly on acoustic instruments by people all around you. And for a bluegrass junky, it's an elixir that rejuvenates the soul and makes you want to come back for more.