We’ve now officially begun our trip west, a journey that will follow parts of two historic routes: The Lewis and Clark Expedition and the Oregon Trail.

It’s hard to over emphasize the importance of these two 19th century routes. Lewis and Clark discovered the overland route to the Pacific, thus opening up the nation to east-west travel in the days immediately after the Louisiana Purchase. It was a trip that in its day, was as monumental as the American landing on the moon is to ours.

The 100,000 Oregon Trail pioneers came four decades or so later in their prairie schooners – so named because their wagons were covered with white canvas that made them resemble a ship at sea. Others took routes that sprang off the Oregon Trail on paths called the California Trail and the Mormon Trail as the headed to the Gold Rush and Sat lake City. 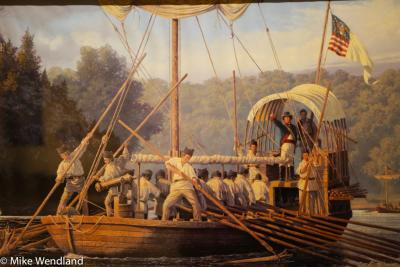 Lewis and Clark and the Corps of Discovery took a keelboat down the Missouri.

Retracing those routes in our Roadtrek Etrek RV – the modern equivalent of a covered wagon – is a trip Jennifer and I have wanted to take for years. So from now till early September, we’ll be visiting places where the ruts of those wagons can still be found, seeing the places where history was made and learning about the vastness of our country and the amazing adventures caught up in that great western migration. 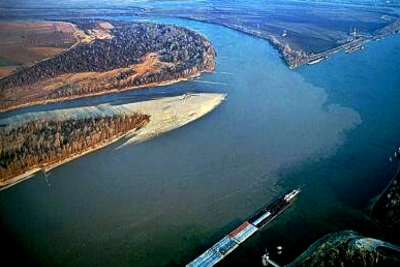 Confluence Point – where the Missouri River (top) flows into the Mississippi in St. Louis.

It all starts with the wide Missouri. At 2,341 miles, the Missouri River is the longest river in North America. It is impressive to behold. But what you see today is much less than 19th century explorers and pioneers encountered. We have messed it up through channelization and dam building, greatly changing the Missouri River. Today, 67 percent of the Missouri is either channelized for navigation (650) miles or impounded by dams (903 miles). Most of the remaining free-flowing portions of the river are near the headwaters in Montana. Channelization has resulted in the lower river being about 50 percent narrower.

But like I said, it is still impressive. But realizing that it was bigger and wider and wilder 200 years ago makes you wonder how these early explorers did it.

Nicknamed the “Big Muddy,” the Missouri River has long been one of North America’s most important travel routes. Every bend in the river is saturated in history. Her waters saw the canoes of many American Indian tribes, fur trappers, explorers and pioneers. The river served as the main route to the northwest for Lewis and Clark and later became the primary pathway for the nation’s western expansion. The Missouri has witnessed the rise and fall of the steamboat era and given birth to countless communities that settled near her banks.

It has meandered all over the place Some parts of the river have moved as much as two miles from their course during the early part of the 19th century. It has a powerfully strong current that those heading west paddled and poled against. And it was always dangerous because of snags and floating debris and sandbars that stranded many a traveler.

We started our tour in St. Louis, where the Missouri dumps into the Mississippi at a place called Confluence Point. Standing at the point where the nation’s mightiest two rivers merge, it’s hard not to think of all the dreams, all the hopes and aspirations that welled up in the hearts of those who came this way in the 1800′s. Lewis and Clark and the Corps of Discovery took the Ohio River to the Mississippi, then the Mississippi to the Missouri, beginning their official expedition of the west from this very spot in May of 1804.

A great book that we are reading as we head west is Robert Ambrose’s Undaunted Courage. It’s the definitive work on the expedition and fascinating reading. I wish we had an audio version so it could play as we are driving. But it was unavailable when we ordered so we sometimes take turns reading aloud from the big paperback to each other.

A hundred miles west of St. Louis, we did our first overnight at a place called Arrow Rock, MO, a dozen or so miles north of I-70 near the Missouri River. At this quiet, peaceful park, there’s a monument overlooking a spot where, early on, Lewis and Clark faced their first of many dangers – huge floating trees that had toppled into the river when the Missori currents undercut the banks they were growing on and threatened to smash their keelboat to bits. 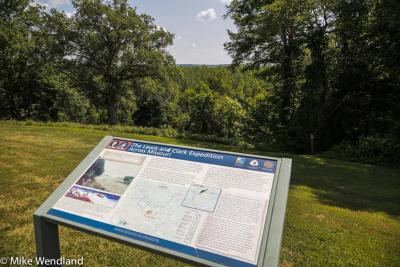 Lewis and Clark almost lost the keelboat at a spot near Arrow Rock just three weeks after departing St. Louis.

The Arrow Rock State Historic Site here has a restored village and great camping. The campground is small, only 47 sites and fills up most weekends. We had no trouble getting in midweek.

The village of Arrow Rock was the traditional starting point for another historic trail – The Santa Fe Trail. In fact, as we move west, off the interstates and through the plains and into the Rockies, we’ll see several other trails all using parts of these same routes, the California Trial, the Mormon Trail and the Pony Express Trail. 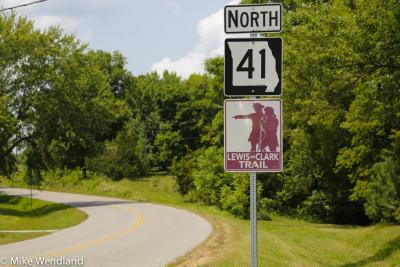 We found Arrow Rock a great place to read, research our route and, thanks to a great Visitor’s Center, immerse ourselves in what life was like when, in the early 1800s, this was the last city on the western frontier. 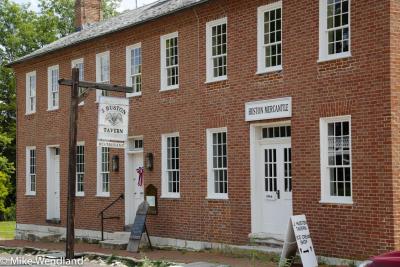 The old Huston Inn at Arrow Rock is still open.

Named because of a tall sandstone bluff on the Missouri that the Osage Indians used to chisel out flint for arrow heads, Arrow Rock once had 1,000 residents. Today, 56 live there. In the summer, there’s a professional theater – the Lyceum – that brings in tourists each day.We watched a production of Agatha Christie’s Witness for the Prosecution and noted, as we returned to camp late that night, that many of our neighbors ha also been at the play.

And the historic Huston Tavern, established in 1834, is the oldest continually serving restaurant west of the Mississippi. We found excellent, family style food, especially the fried chicken, raspberry glazed ham, mashed potatoes, corn, biscuits and cobbers to die for.. 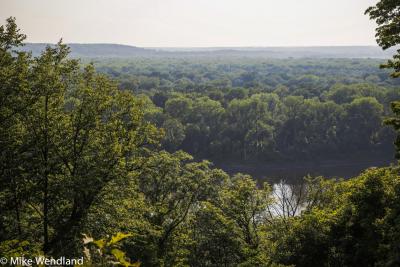 The Missouri River near Weston, Mo. The wilderness terrain is much the same today as then.

We liked Arrow Rock so much we set three nights, soaking up the landscape, thinking about what it must have been like for those pioneers so long ago who set off from the very place we were parked beneath s cottonwood tree in our air conditioned Roadtrek.

Not quite the same, to be sure. 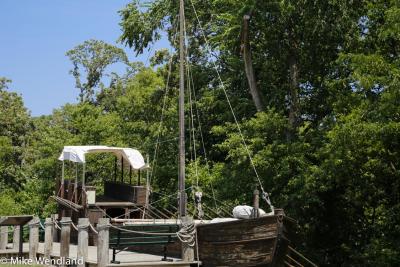 We left Arrow Rock and continued west, past Kansas City, following the Missouri to the Weston Bend State Park near the town of Weston, once a thriving river town now – thanks to the river’s shifting banks – more of a trendy little place of antique shops and bed and breakfasts.

We overnighted at the Weston Bend State Park and watched the sunset at a Missouri River overlook where the Corps of Discovery set shore for some exploring. 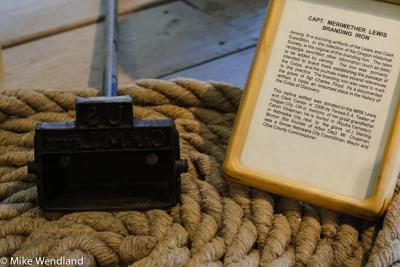 Lewis’s branding iron at the Lewis and Clark Discovery Center in Nebraska City.

The next day it was north and west to Nebraska City, NE and the Lewis and Clark Discovery Center on the river there. The center itself wasn’t much. Mostly some displays, including a branding iron owned by Lewis and used to emblazon trees along the route.

The thing that most interested me was a full-sized replica of the 55 foot long keel boat used by the expedition to navigate the Missouri. Originally made for a movie, it sits out front of the center and allows visitors to come abroad. I grabbed one of the oars of the same type and size used by the crew and was amazed by how heavy it was and could only imagine what it would ave been like pulling it hour upon hour against the currents. 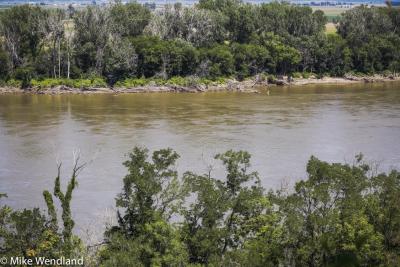 The Missouri River is called Big Muddy” and even today, as seen from Nebraska City, it looks much like it did in Lewis and Clark’s time. Note the snags and driftwood on the opposite bank.

There’s a shore trail that leads do yet another river overlook that made for a nice photo op. The river is still muddy and the current is obvious. The banks of the Missouri remain littered with snags and driftwood.

From Nebraska City, we took NE-2 west through rolling cornfields, slowing moving past the Missouri and closer to the Oregon Trail, which we’ll be following over the next several days.