All my life as a journalist- for more than three decades – I’ve been on deadline.

The presses would roll, the red light on the studio camera would blink on and, that was it. I had to be ready. Done. No more time.

So the clock ruled my days. I was single-mindedly focused on finishing, getting to press time or air time. Then, I could breathe a little… and get ready for the next day.

It was a wild, crazy, fun, frustrating and high-adrenaline occupation and I wouldn’t have traded it for the world.

But last year, as I neared retirement age, I couldn’t help but get excited at the prospect of life NOT on deadline.

That’s how I have been living the past 18 months.

I have to admit, old habits are hard to put aside.

“Why are we in such a hurry?” my wife Jennifer asked on our first multistate trip in our new Roadtrek back in the spring of 2012. I was 600 miles in on the first day and getting crabby. I wanted to make 800.

“Because….,” I started to reply. Then I blanked. I couldn’t come up with a reason. I didn’t have to do 800 miles. In fact, there was no reason to be on the road as long as I had been that day. There was no deadline.

That was the first lesson I learned on the first day of the first trip.

It’s one I have to keep re-learning.

There is no hurry. The journey is just as important as the destination. Getting there is, indeed, half the fun.

The RV life is about being mobile, on the open road in our Class B motorhome. And it has taught me how to decompress.

So many times in my journalism career, I’ve flown over the country, chasing some story, heading somewhere, fast, on deadline. I’d look down below from 35,000 feet and see a green and brown blur. Now, behind the wheel and on the ground in our Roadtrek, I’m discovering the beauty beneath the blur. It is a magnificent land and being on it, instead of above it, is both soothing and stimulating.

I never thought I’d end up in an RV.

But in so many ways, it’s been the perfect choice for Jennifer and me. Not only are we able to connect with each other, we’re meeting other people and learning things I never did standing in front of a camera using the land as a backdrop for my standup, or pushing a pencil in a reporter’s notebook.

When you stop living on deadline, your eyes open wider.

Life becomes an adventure of serendipity.

Like the bit of history we picked up on a summer trip north to Michigan’s Upper Peninsula and the southern shore of lake Superior. Standing on a wilderness bluff next to a towering sand dune called the Log Slide, we learned that in the 1880’s lumberjacks slid 100-foot white pine logs down the dunes to the water, where they were gathered into huge booms and floated seven miles east to the town of Grand Marais.

That sent us to that town and a delightful but seldom-visited little museum tucked away in a building once used as the post office. We spent an afternoon looking at old photographs and learning how Michigan’s lumber era was as lucrative as the California Gold Rush of the same era.

In Gadsen, Alabama, we found a campground located on Black Creek and right next to the awesome 90-foot Noccalula Falls. There, instead of rushing back to the road the next morning, we lingered again over local history when we discovered the first statue of a person jumping off a cliff. The statue is of the Cherokee princess Noccalula who, according to local legend, plunged to her death after being ordered by her father to marry a man she didn’t love. It is made entirely of pennies collected from local school children in the mid-1960s.

And on a trip back to our Michigan home from Florida, We decided to pull off the interstate and travel the two-laned US 127, which roughly parallels I-75 north through Tennessee and Kentucky, anywhere from 10 to 50 miles to the west. We leisurely made our way through scores of small, picturesque mountain communities and ended up at the Big Bone Lick State Park in northern Kentucky, about 35 miles south of Cincinnati. There we dug into America’s prehistoric past, learning about the bones of mammoths discovered there submerged in muck. President Thomas Jefferson has fossils found there in his personal collection.

Those are just three examples about things I’d never have seen if I were still living on deadline. But because we were in our RV, staying right there, far from the look-alike chain hotels that cluster around the freeway interchanges, we were able to experience fascinating places that wouldn’t even have caused a blip on our GPS.

Then there are the campfires and the people we meet sitting around them, the help and suggestions they give us about living in a motorhome. There are the bicycle rides on trails and roads we’d never ride if we weren’t able to haul our bikes on the back of our Roadtrek. And the special walks we take with our Norwegian Elkhound, Tai, who travels with us but would have to be left at home if we were hoteling it.

We’ve driven 42,000 miles in our Class B RV since March of 2012 and living out this motorhome adventure.

I may not be living on deadline anymore. But I’m still a journalist at heart, this time telling the stories I want to tell about people and places I’d never experience if I wasn’t out there in my RV.

I look forward to meeting you down the road. 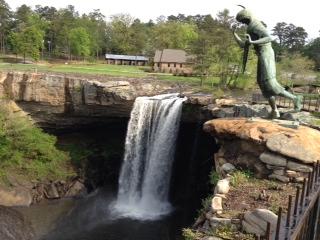 Noccalula Falls near Gadsden, Ala. The statue commemorates a lovesick Indian maiden’s legendary plunge over the falls. The statue was made from pennies collected by schoolchildren. 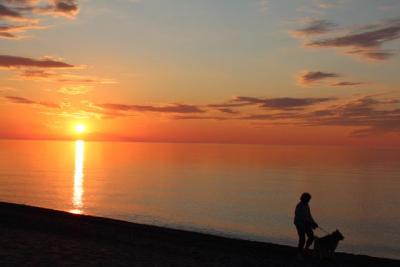 Jennifer and our dog, Tai, walk in a UP Michigan sunset along Lake Superior.