Type Bs and Cs, the smaller versions of the rapidly growing motorhome market, are leading the way in the dramatic turnaround in the RV industry thanks to the ever growing number of Baby Boomer retirees used to active, mobile lifestyles.

I’ve spent much of the past week here at the Recreational Vehicle Industry Association’s annual trade show in Louisville, Ky., talking to leading recreational vehicle industry experts, trade association officials, manufacturers and dealers and all agreed that sales for 2014 were going to continue spiking up. Jim Hammill, president of Roadtrek Motorhomes, North America’s best-selling Type B maker, said he is projecting 20% growth next year.

Dean Corrigal, from Type B and B-plus maker Leisure Travel Vans, showed me their latest models and said his company was also seeing a huge growth in sales as well, also attributing it to the growing number of Baby Boomer retirees and the better fuel economy and the ease in driving offered by small motorhomes.

Even Airstream, which targets only the high income luxury Type B market, said demand for B’s had never been higher.

The above video showcases why Type B and C RVs are so hot and gives you a look at some of the latest features. 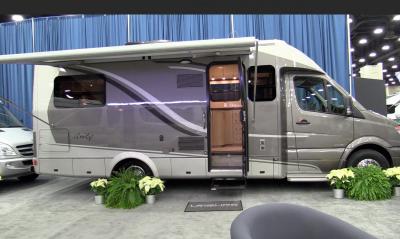