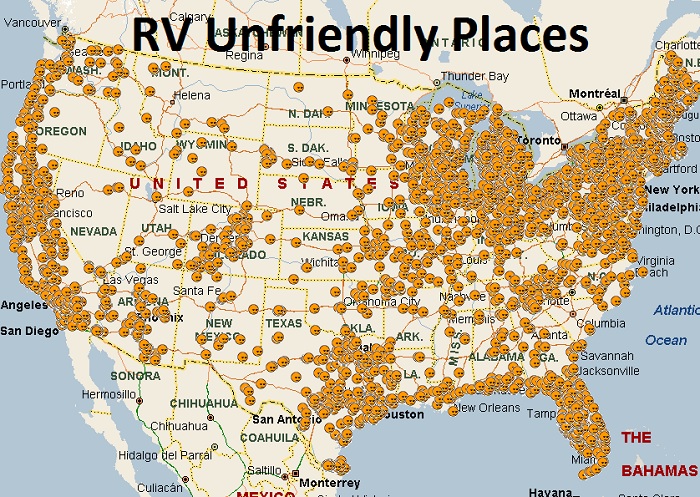 There’s a real battle going on out there in the RV world and it pits some powerful interests against those who resent paying for services they don’t need and only want to take advantage of the generous offers of places like Wal-Mart, Cabella’s, Cracker Barrel and other businesses that not only allow but welcome brief overnight stays by traveling RVers.

But for more than a decade now, campground owners and their national association have quietly been working behind the scenes to convince local governments to enact anti-RV ordinances that ban overnight camping in anything but a campground.

As a result, thousands of places around North America have passed such ordinances. And more do so everyday.

Now before I go any further, I need to point out something. I am NOT anti-campground. Neither is Campskunk or Jim Hammill or any of the other writers on my http://roadtreking.com/ blog. I use campgrounds all the time. Jennifer and I will be in one in Cape Cod next week. We have reservations over the summer at others in Ontario, Nebraska, Oregon and will likely make more. Most of the time, our experiences have been great. But it is no secret to the RVing public that many campgrounds need a lot of work. I’ve written about this before and I will continue to do so, believing exposure is the best way to force them to clean up or go away.

What so many of us object to are discriminatory laws and local ordinances that prohibit traveling RVers from overnighting in places like rest areas, Wal-Mart parking lots and other places. I’m not talking about setting up camp, putting out the chairs, starting a campfire. I’m talking about spending a few hours sleeping overnight before hitting the road again as we are on our way somewhere. Often, we’re on our way to a campground where we’ll stay for several days. Overnight Parking is not camping, it’s parking.

Lots of paces welcome us. Wal-mart company policy, for examke, is to allow overnight RV parking. Sam Walton, the founder, was an RVer. But astutely, we realized that the RVers who overnighted in his lot bought groceries and supplies from his store.

But corporate policy is trumped when a local ordinance bans overnight parking.

As we’ve dug into this, we’ve encountered some pretty powerful players aligned against free RV overnighting and behind the anti-RV laws. The biggest is the 3,000-member National Association of RV Campgrounds (ARVC). Here’s a 2011 blog report from a site that at one point reported on a database of such places, even posting the accompanying map up above.

“One of the stated missions of ARVC is to influence legislators to institute and/or enforce parking bans in public places where RV’s are otherwise welcome. ARVC actively urges and assists members to pressure their towns to prohibit parking at public places so that RV’ers have no choice but to stay at a nearby … campground. Such parking bans extend to temporary streetside parking in some cities and towns. Not only has this has resulted in the denial of the right of private property owners to determine who shall have the use and enjoyment of their property but it has eroded our basic freedom to choose!”

Prodded by Jim Hammill, I was going to try and develop a listing here on Roadtreking.com of all such RV unfriendly places that prohibited overnight camping.

Turns out, I don’t have to reinvent the wheel on this.

There already is a resource that to help you find free or very low cost places to stay while traveling in your RV. It’s called OvernightRVParking.com and it’s a labor of love for a guy named Jim O’Briant, of Gilroy, CA, who started the site in 2008. As of today, it has a database of nearly 12,000 places around North America that can be searched, listing places that allow and prohibit overnight RV parking.

Campskunk, whose recent post on anti-RV laws in Ontario started this whole controversy on my http://roadtreking.com/ blog, has been a user of OvernightRVParking.com for years.

Plug in a city and you’ll get a map listing where you can or where you can’t overnight free or for a very low fee. O’Briant himself tries to verify every report and there are easy ways for subscribers to add to the information. He also has individual state and province pdf files that members can download to their computers if they don’t have Internet service on the road. He doesn’t recommend printing them out, as some are over 100 pages long.

The website is tablet and mobile device friendly, so you really don’t need a special app.

I had a great conversation with O’Briant and he has made a nice offer to readers of this blog. If you decide to subscribe to his service, he will extend your membership from 12 months to 15 months. That works out to a pretty nice discount. To get it, when you sign up and the form asks how you heard of him, type in roadtreking.com and he will automatically extend your membership.

O’Briant is no stranger to the overnight parking ban we’ve been writing about here recently.

“As of about 5 years ago, the ARVC website had a page discussing their ‘model legislation’ (i.e., pre-written laws that RV Park owners could take to their local city councils) and about all the support that ARVC would give to local campground owners who were working to get these laws passed in their communities,” he told me in an email. “After this became public knowledge, that part of their website disappeared (or perhaps it moved to a ‘members only’ accessible area of their site).”

On the ARVC site now is this description of what it offers its members:

“Powerful legislative and regulatory advocacy programs that protect your business interests. We monitor state and national policy issues that affect our industry and take action on your behalf. These efforts ensure that all of our members have a powerful voice and strong representation on the issues that matter.”

Other big names have been lined to the controversial anti-RV parking bans based on their support of ARVC.

“Good Sam was barraged with questions about it, as they were also accused of promoting these laws,” said O’Briant. “Their official reply was that they don’t do it. But Good Sam is (or at that time was) the largest financial supporter of ARVC.”

Another prominent RV industry name involved in the association’s efforts is KOA. The corporate organization seems to have taken a hands -off stance on the anti-RV parking laws but individual KOA owners have and still hold leadership roles in the group.

I signed up for OvernightRVParking.com (I paid full price, by the way) and plan to use it Friday and Saturday night as we head to Cape Cod. We’ll be in a campground Sunday-Thursday. I’ll also use it on the way back.

Meantime, share under comments here your experiences with RV unfriendly towns. Let’s make sure we don’t spend a dime in any of them. 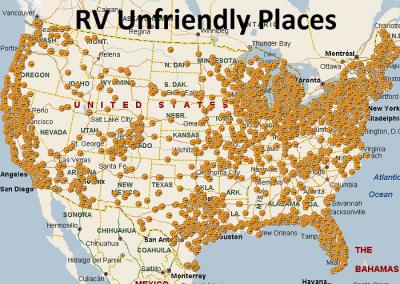 There used to be a website called rvunfriendly.com. It vanished from the net, sometime in late 2011 or early 2012. But this is the map they had that shows places with RV unfriendly laws.