Bisbee was founded as a copper, gold, and silver mining town in 1880, and named in honor of Judge DeWitt Bisbee, one of the financial backers of the adjacent Copper Queen Mine. In 1929, the county seat was moved from Tombstone to Bisbee, where it remains.

The deportation was the the illegal kidnapping and deportation of about 1,300 striking mine workers, their supporters, and citizen bystanders by 2,000 members of a deputized posse, who arrested these people beginning on July 12, 1917. The action was orchestrated by Phelps Dodge, the major mining company in the area, which provided lists of workers and others who were to be arrested in Bisbee, Arizona, to the Cochise County sheriff, Harry C. Wheeler.

These workers were arrested and held at a local baseball park before being loaded onto cattle cars and deported 200 miles (320 km) to Tres Hermanas in New Mexico. The 16-hour journey was through desert without food and with little water. Once unloaded, the deportees, most without money or transportation, were warned sternly against returning to Bisbee. 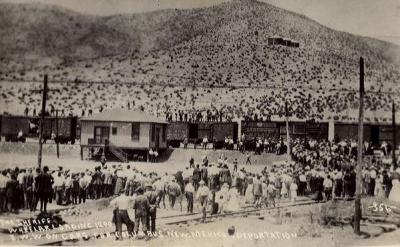 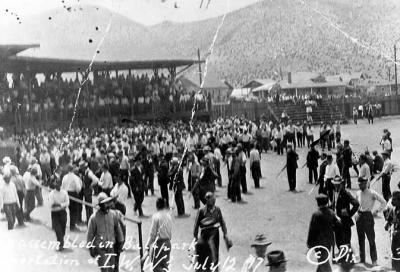 Martha and I visited Bisbee and took a tour of the Copper Queen Mine, a hard rock mine in Bisbee that is played out and is now a tourist attraction.

Outfitted in hard hat, miner’s headlamp, thousands of Bisbee visitors ride into the Queen Mine Tour each year—heading underground and back in time. Tour guides, retired Phelps Dodge employees, lead the groups 1,500 feet into the mine and recount mining days, techniques, dangers and drama. Adding a personal touch, the miner-turned-tour guides help visitors experience what it was like to work underground. Tours depart each day, seven days a week, from the Queen Mine Tour Building, located immediately south of Old Bisbee’s business district, off the U.S. 80 interchange.

The town is an interesting place though we didn’t see as much of it as we wanted. Instead we did the mine tour and then went to a local micro-brewery.

After donning our safety equipment we were ushered onto the mine train. This is the original train that ferried workers underground and back to the surface. It’s very narrow and you sit facing forward while straddling a seat somewhat like sitting on a horse saddle.

Tour Guide and previous Phelps Dodge mine worker making sure everyone is ok with going underground. At this point we are about 1000″ into the mine tunnel.

Quartz deposits in the mine wall

Typical work area within the mine. The bracing and scaffold in the background is typical of the type of reinforcement used inside the mine to shore up the weight above after blasting and clearing the tailing’s from the tunnel or openings

Mine supervisors peddle cart. Supervisors used these to get around within the mine. This saved time. Miners would hide these to frustrate the supervisors.

Examples of hard rock drills used in the mine to drill blasting holes. The holes were then loaded with dynamite.

After the holes were drilled they were loaded with dynamite with a blasting cap inserted and then a fuse which ran outside the drill hole. The fuses were cut to length depending on which holes had to be blown first. The center most holes were blown first to clear space for the rock debris to fall into and then the blasting continued (all in rapid succession from center to the outermost drilled holes). This allowed the debris to be cleared by mine workers without rock getting jammed up inside the diameter of the blast.

Mine shaft elevator. This was formed using the same shoring/scaffolding shown above, The elevators were used to ferry men and equipment to and from the surface. They also provided room for fresh air to come into the mine.

This gigantic hole is the “Lavender Pit” The pit is an open pit mine that was mined by blasting through the rock and then using machinery to remove the tailing’s and bring them to the top for processing.

After the mining tours we made our way to the “Old Bisbee Brewery” This spot is a local’s favorite and turned out to have great beer.

I can recommend the mine tour and the Brewery. It was very interesting to learn the techniques used to extract the ores. The Copper Queen produced some the most pure copper ore ever found it averaged 25% in purity.