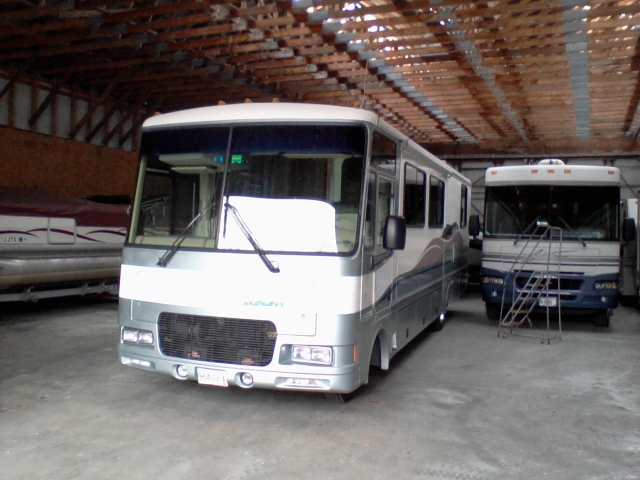 Today, I parked our "Cottage on Wheels" in its winter storage spot. It will be dry and out of the weather - see photo.

A former lumber yard in our area has converted some of their buildings to storage, and advertised locally this fall. After confirming that they could accommodate a 32' Class A, and that it could be parked such that we could take it out for a planned winter excursion (more on this below), we sent a deposit. We also checked with others who store a MH, and found that the price was about right.

A few weeks ago, as our Maine weather started to dip below freezing, I winterized the coach. I'm not totally new to this. We've had trailers before. One frustration was that this rig has not had a water heater bypass installed. I would have put one in before winterizing, but the water heater plumbing is not very accessible on this rig. I thought of a scheme where I could pump anti-freeze in the hot side first, then drain and recover some from the water heater, reusing it in the cold side. When I looked things over, i found that the gas plumbing runs in front of the water heater drain in such a way that it would be difficult to rig a drain extension hose, or even a funnel, to catch the pink stuff. So, I just put in more RV anti-freeze and filled the whole thing. Using the leveling jacks, I tipped the coach up so that the inlet from the water tank was definitely the low point. That allowed me to pump from a small quantity of anti-freeze in the water tank, without sucking air.

After I had confirmed how much I needed, I went back to Wal-mart and bought enough more RV anti-freeze to re-winterize on the way back from our winter trip to Florida. That way, I won't have to be searching for it on the way. Wal-mart sells an off-brand RV anti-freeze for $2.97 par gallon, and Prestone brand for $4.97 a gallon. Given that I use quite a bit of the stuff, and I'm just going to throw it away anyhow, I buy the cheaper brand. Both claim they're good to -50 F.

When I got to the old lumber yard/storage place, I had a few minutes to snoop around while the proprietor was waiting on another customer. I didn't like the looks of some of the buildings, and some of the doors did not look wide enough or tall enough. I was very pleased when it was my turn, and the man led me to one of the newer buildings with a huge door and a nice concrete floor. Honoring our request, he had saved a spot for me where I can drive right out.

On the way home, Grandma commented that we could store the MH for more than 10 years for what it would cost to build a shed for it on our property. She's right, though I do like the thought of having my own storage, with at least an electrical hookup. As a compromise step, I may someday make a nice level parking space next to our garden shed, then run electricity to the shed, with an outlet for the coach.

In mid to late January, we'll pull the MH out of storage and take it to a shop about 25 miles from here that does truck alignments and suspension work. I have already checked with them to confirm that I can have them install the new Bilstein shocks that I have purchased, while I have it in to them for an alignment. I'll have them do a chassis lube as well. I did an oil and filter change myself, less than 200 miles ago. I also have a steering stabilizer on backorder, which will be installed at the same time.

My part-time work slows up in the winter, so it's a good time to take off. We are going from Maine to Florida, where we plan to spend about a month. We haven't nailed down our departure date. It will depend somewhat on the weather, but will be at the end of January or the first part of February. I have to be back for some work-related training in the last week of March.

Later, I'll post about the Florida trip, and perhaps about how our chassis handling improvements worked out.