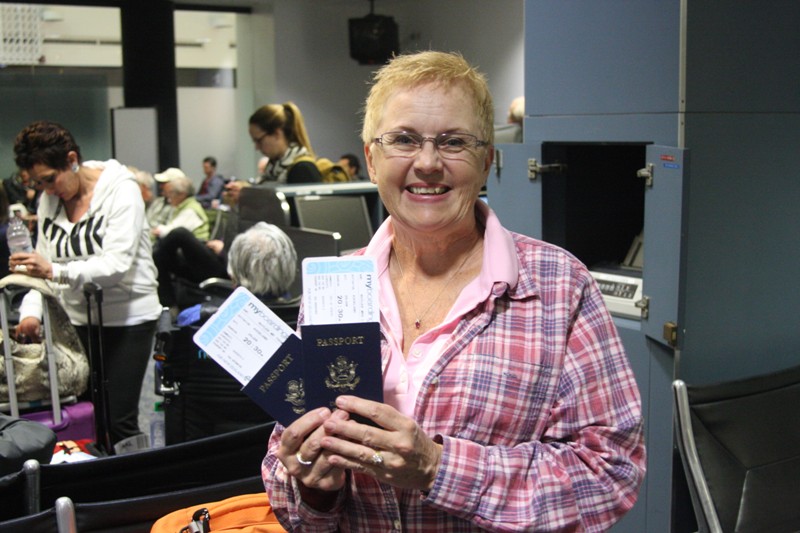 In 2012 Louise and I celebrated our 20th wedding anniversary. We couldn't decide what to do or where to go for the celebration. Living in south Texas now, we didn't want to travel north in December so we decided to postpone the celebration for a special trip of some kind. We received an advertisement for a cruise from a company we had cruised with once before. This was a really exotic cruise, perfect for an anniversary celebration. Two weeks cruising the Fiji Islands, Vanuatu and New Caledonia. We put our deposit down with about a month before the commitment date. The no refund date passed without much discussion, the trip was on. Scheduled for the first two weeks of June 2014, it seemed quite a long way off.

Soon after making the decision to take the cruise, I pointed out that Fiji wasn’t really too far from New Zealand and Australia. Can you see where this is going? We discussed that and put it aside. From time to time one of us would bring up the idea of extending the trip for the cruise to include New Zealand and Australia. At FMCA in Gillette, Wyoming last spring we attended a session on traveling in New Zealand and Australia in campervans with the tour group associated with FMCA. The presentation sounded great, we made notes and inquired about the price. It all sounded good until we sat down to discuss details, the price quoted was per person, double it for the two of us. That was a lot more than I was prepared to spend for a six week trip to the two countries. Louise and I are not tour people, we don’t like to be on a schedule when we travel. We’ll do it when we must but we much prefer to make up our own schedule as we go. So we decided to go it on our own.

Finally last fall, we decided that if we were going to see New Zealand and Australia we need to start making arrangements. Louise took the lead contacting New Zealand Airlines to get prices and information on flights. They service all three destinations so we settled on them. Louise started planning a three week trip extension for the two week cruise. I said that I wanted to make the trip a full year to allow us time to see everything we wanted. That’s when the fight started!

I found a set of suggested drives for Australia, two week loops that covered most of the country. There were about ten of them so this was far beyond what Louise wanted. We talked and settled the argument on a four month extension of the cruise. We would spend one month in New Zealand and three in Australia. I anticipated doing this following the cruise but Louise wanted to be back in the US following the cruise. So I agreed to scheduling the trip before the cruise. Somewhere in there is a lesson for the US Congress I believe.

Louise began to go to work with the airlines and their travel agency. We booked flights for the entire circuit from Los Angeles to Auckland, New Zealand then after a month we would fly from Christchurch, New Zealand to Melbourne, Australia. At the end of three months in Australia we would fly from Sydney to Nadi, Fiji for the cruise. Then at the conclusion of the cruise we would fly from Nadi, Fiji to Los Angeles. From there we built in the details. We would rent a campervan in Auckland and return it in Christchurch, making a ferry trip from the north island to the south island on a ferry so we reserved the ferry trip.

In Australia we would stay in a hotel in Melbourne for three days then take the ferry to Tasmania where we would stay in a hotel for a week traveling by rental car to tour the island. When we returned to Melbourne we would pick up another campervan and travel for 10 weeks going north along the east coast up to Cairns then traveling west along the north coast to Darwin and finally traveling south to Perth. We would leave the campervan in Perth and fly to Sydney. Our visit to Sydney, would involve a hotel stay for a week then fly to Nadi, Fiji. All this was going to cost us in the neighborhood of what the six week trip with the FMCA travel agency was charging but we would get four months on our own schedule seeing just what we wanted. What will follow in the coming days and weeks is a running commentary on this trip.

I just checked my records and this posting is number 100 for this blog and comes at the end of 5 years of activity on the FMCA web site.