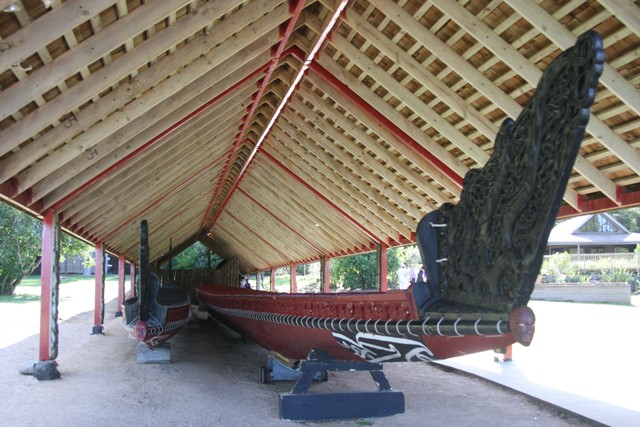 We left Orewa Beach Sunday morning headed north to Whangarei and beyond to Russell and the Waitangi Treaty Grounds. After several days in the campervan we had a list of things we needed. Groceries were at the top of the list. Yes, despite our purchase on Friday we were in for another purchase of food. We located the Countdown Grocery and Louise went in to start shopping. I went to a housewares store, Briscoes. I thought it was going to be more like a Lowe’s than a Bed Bath and Beyond but I still managed to find most of what I wanted. I found a door mat marked $19.95, two plastic wine glasses marked $10 each, a good steak knife for $9.99 and a sharp kitchen utility knife for $6.99. The door mat was marked 50% off so it should have been about $10. When everything was rung up, it came to $30.00 NZ. I checked the ticket and everything was on the ticket but at a discounted price. Must have been a big sale day. With the US conversion it came out to $25.19. Now that is better! I remarked to Louise that I wish the manager of the Briscoes store was running the Countdown! Louise spent another $170 at Countdown. While she prepared lunch I went to a technology store in the shopping center and inquired about a cell phone for our use. They directed me to the Vodaphone store which knew exactly what I wanted. I purchased a simple cell phone with 30 minutes of time for $50.00 NZ, $40.87 US. I consider this a bargain considering what it would have cost us to use our AT&T cell phones here in New Zealand. We’ll plan to do the same thing in Australia. No, of course the New Zealand phone won’t work in Australia!

Shopping and lunch completed, we were off to the Waitangi Treaty Grounds. We arrived at 4:00, inquired and found they were open until 7:00 which gave us time to explore. We paid $100 NZ, $82 US for admission. The treaty grounds are the location where the treaty was signed between Great Britain and the Maori leaders giving the British Crown sovereign control of New Zealand in 1860. A small museum displays photos, artifacts and documents from the signing. A short video describes the events leading up to the treaty signing. The house which was the residence of the an early British resident, James Busby, still stands and has been restored and furnished with period furniture. The gardens were in full bloom. Also on the grounds is a replica Maori fishing camp and a traditional Maori meeting house. We missed the cultural performances, war dances and celebratory dances. We would see them at another site later in the trip. There is also a huge Maori war canoe which held 80 rowers and is launched each February 6 as part of the Waitangi Day celebration of the signing of the treaty. We were there on February 2 and weren’t able to stay for the celebration. We did notice that traffic was really heavy on February 6 and the schools were closed. It was only after several comments to that effect that we remembered this was a holiday, the celebration of the birth of their nation. We walked from the war canoe by the beach back up to the house on the same path William Hobson walked 154 years before as he represented the British Crown at the treaty signing.

On the western outskirts of Russell is a Kiwi Holiday Park. The facilities were good but the parking was mostly sloping. We found a site that was reasonably level and pulled in. Our neighbors were sitting out having a glass of wine and relaxing when we pulled in. They struck up a conversation right away. I had to excuse myself to hook up the electric and turn on the gas. I told them if I didn’t I wouldn’t get fed tonight. We later went out with our wine glasses and had a wonderful discussion with them. We found numerous things in common. They were from Melbourne, Australia and we exchanged contact information and have an invitation to get together with them when we are in Melbourne next month. The RV community is the same everywhere, friends are just a few words away.