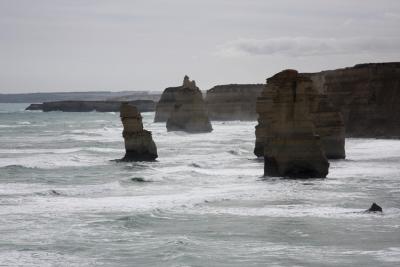 Leaving Melbourne we head southwest toward the coast and a road called the Great Ocean Road. It is a little more than a hundred kilometers to the coast. When we reach the Great Ocean Road we find a curving, hilly, narrow road. Reaching the ocean, we are rewarded with wonderful views of a spectacular coast. We spent three days on the Great Ocean Road. We found so many viewpoints that we were unable to stop at all of them. The coast in this area between Melbourne and Adelaide is rugged limestone which is being eroded away by strong waves. The nature of the limestone is to collapse once undercut by the waves. This produces cliffs all along the seaside. As the erosion proceeds, some areas are stronger than others and this leaves sea stacks, cliffs isolated from the shore. Some of these are small others quite dramatic, large and rugged.

A region with many of these sea stacks has been named the Twelve Apostles. This area is quite popular with tour busses visiting along with hundreds of independent travelers. We joined the procession to view this concentration of sea stacks. There are multiple viewpoints as these cover a distance of over a kilometer. From one viewpoint only a few can be seen. Visiting multiple viewpoints allows one to see most if not all of them. We had wonderful weather, clear with a nice breeze. During our visit, helicopters flew a steady parade of sightseers by the cliffs. Their base of operation was right at the parking lot so people could simply walk from their car to the cliffs or to the helicopters.

We walked to all the viewpoints and spent time enjoying the show. The waves formed powerful breakers against the rocks. The sound and the fury of the waves on the shore always amaze me and I lingered at each point to absorb all the action going on. By the time we finished this section of the drive, we had traveled only 100 kilometers and it was now time to find a campsite.

Our second day we stopped for a rest stop in a small town along the route. Beside the public restrooms, there was a viewpoint of the wetlands and a small river. There were birds everywhere so we decided to take some time to identify a few new birds. But first we fixed a lunch and ate. Then it was off to walk the trail down to the river. A young lady next to us was arriving at the same time we started out and she noticed the bird book I was carrying. We struck up a conversation, she was from Quebec and was very interested in birds. We shared conversation at the viewpoint then she went on her way.

A couple that was eating lunch on the deck at the viewpoint struck up a conversation and we spent another 15 minutes visiting with them. They were native Australians from near Adelaide. He was a mine safety advisor and we discussed our mining museum experience in Beaconsfield several days before. He remembered the details of the incident with the two trapped miners and we learned a great deal from him about mining in Australia. He has worked mines in many areas we will be visiting and his suggestions gave us ideas of where we could see more of the mines in Australia.

Now we began our walk down to the river. By the time we had completed the walk we had identified five new birds and had a good look at our first Crimson Rosella, a spectacular red parrot. Half our day gone, we resumed our trip along the coast. This day there were arches and shipwreck sites and stories. At one point we walked down steps along the cliff to an inlet where we set our shoes aside and walked barefoot on the sand.

Then it was off to another campground. Our campgrounds have been good places to stay but the internet access leaves much to be desired. At Apollo Bay, a change in the internet altered the password shortly after we checked in and we were not informed. With the office closed for the evening, there was no way to use the internet service. In Port Campbell the service worked occasionally and then would log of and we could not get back on until the next morning. Mount Gambier had a subscription internet service that cost $7 per hour or $20 for 24 hours. There were longer term options at better rates but I needed to know how widespread the service would be before committing to a long term contract. As a result, my postings have been delayed repeatedly and I remain posting our travel information with a time delay.