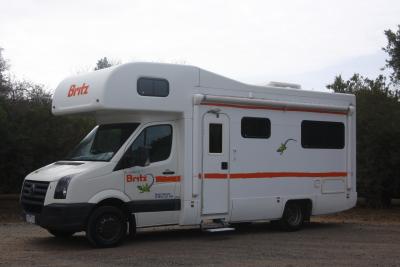 Our campervan has several nagging problems and one big problem. The big problem is the gray water tank which doesn’t seem to vent except through the shower drain. The drain on the gray water tank is very slow and the valve has stops at two open positions but no stop for a closed position. So it takes forever to drain the tank and then when the tank is empty you just have to guess when the valve is closed. I talked to the technician and explained the problem. I also mentioned that the hose for the gray water has a very old ragged looking fitting and I wanted that replaced as well. They cleaned the tank and replaced the old valve and the fitting on the hose.

We had several weak gas lifters that hold cabinet doors open. If you held the door in a spot for a moment they would hold the door there but if you needed it fully opened you had to hold it my hand. They replaced the lifters and found the problem with one of the latches that was malfunctioning. We also had plastic glasses which were cracked. One of them leaked and was unusable, the others were just a few uses of being in the same condition so we got replacements for those.

All this took about two hours. In the meantime, Louise and I were deep into our computers, using the free internet at the Britz office. We managed to get caught-up with much of our work. Once repairs were done we closed down the computers, checked all the work and then set out on our way to our next destination. We’re heading back east toward Canberra, the capital of Australia. We put the name of a town along our intended route of travel into the GPS and off we go through northern Adelaide. About 15 kilometers of city driving, stop lights and the occasional round-about and we’re onto the expressway. This turns into an elevated highway for about six kilometers and turns us out into the countryside. About 20 kilometers out of town the four lane separated highway becomes two lane but retains the 110 km/hour speed limit.

On good highway, the campervan can be safely operated at 110 km/hour or about 70 MPH. The problem is that there are many stretches of road that have roads that are less than good. Several days ago I posted some brief information about the roads we are encountering. The campervan drives like a truck. The suspension feels like a truck and its handling matches. The pavement is often lower along the shoulder of roads which makes the campervan lean toward the shoulder. All this rocking and rolling rearranges many items in the storage areas of the campervan. We often think of the airline caution, “Objects in overhead compartments may have shifted during flight.” Even with all this, the roads in Australia are a definite step up from those encountered in New Zealand. Roads in Australia are wider than those in New Zealand. We’ve encountered a few narrow bridges but no single lane bridges which were common in New Zealand.