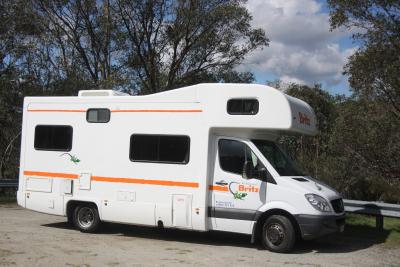 Without any definite word on the outcome of the refrigerator problem we decided to stay one more night at the Big 4 Campervan Park in Ecucha. Louise had our refrigerated items stored in the refrigerator in the park kitchen facilities. We moved to the new site and then decided to explore the town. As we walked, we got a call from the road service company. The agent informed us he was trying to put together a solution. He thought we would be exchanging our campervan for a different one and just wanted to confirm where we were headed and where the best place for the exchange would be. We indicated our intentions to be in Albury in New South Wales as our next stop.

With that news, we could relax and enjoy the day in Ecucha. Our first stop in town was the Port of Ecucha. Yes, Ecucha had a port. We are far inland but like the cities of St. Louise and Minneapolis, goods and materials can be shipped up and down a large river to the ocean. The Murray River was just such a river. Ecucha no longer has a port because the Murray has several dams downstream from Ecucha. At one time goods and materials were shipped into and out of Ecucha on the Murray River. A fleet of paddle wheel river boats still rest in the river there. Several of these operate tours.

There is a preserved old town along the waterfront with buildings from the early settlement of Ecucha and they post signs on buildings so you can tell who built them and their original purpose. We enjoyed walking from shop to shop, a tea café attracted Louise’s attention and we planned to return later. Unfortunately, tea is served for a specific time in the afternoon and we didn’t get back in time to stop there. We browsed the blacksmith shop and the woodworker shop. A modern day clock shop was in one of the old buildings and several wineries had outlets along this street. We had a grand time walking along the river and exploring downtown Ecucha.

Returning to the campground, we found that we had missed a phone call. The phone I have is set to maximum volume and vibrate and I still am missing calls. The message said that someone would drive a different (new to us) van to meet us (at our specified location) tomorrow at 2:00 (our specified time) and that they would call again in the morning with details. To get the phone message I had to set up my mailbox which took almost 10 minutes and ran down my prepaid phone. I would have to buy a voucher at the Coles Supermarket on my way out of town to put more time on the phone. I could do it on-line but they won’t accept foreign credit cards for any payments on-line or even over the phone.

Friday morning we left Ecucha headed for the Big 4 Park in Wodonga where we would meet the new campervan and its driver for the exchange. We arrived about noon. That gave us two hours to get lunch and begin unpacking the current campervan. Almost exactly at 2:00 the driver arrived with our new campervan. We went through the inspection and began to transfer our clothing and supplies from one to the other. Con, the driver, pitched in and within an hour we were moved and he was on the road. We spent the evening putting everything into cabinets and rearranging until we were happy with the way everything was stored.

The new campervan is different, a 5 passenger van instead of 4. Both in New Zealand and here in Australia, our campervan was a 4 passenger vehicle. This one is the same size as the one we had before but it has two bench seats up front and a dining table/bed that can be set up there. Everything is arranged differently so we really do have a new house. Driving this vehicle the next morning I found it performed much better than the one we had previously and glory be, it had cruise control! I love cruise control. In fact I almost always drive with the cruise control on, even in light city driving. Cruise control would have been of no use whatsoever in New Zealand but here in Australia I can see long drives in the outback coming up in our itinerary and had been wishing we had cruise control.

Besides the cruise control, this campervan has better suspension so it doesn’t rock and roll so badly and the engine/transmission combination is much peppier than the previous van. We are much better off with this vehicle. Not only that but Con told us to stop at the office in Sydney and they would wash the campervan for us and exchange the linens for a fresh set! I’d say that Britz really does take care of its customers.