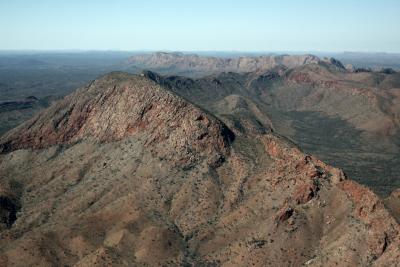 Stick a pin in the center of Australia and you would come close to hitting Alice Springs. This is our next objective. We left Tennant in good time in the morning headed south on the Stuart Highway. We have the day to cover about 530 kilometers, somewhat less than our goal for the last two days. Fuel stops are more common now as this highway is more heavily traveled. This allows us to continue traveling for a longer period of time without stopping.

Not far south of Tennant we encountered a scenic area. With fewer kilometers on our travel schedule for the day, we pulled off to travel through a short road paralleling the Stuart Highway. The road took us through an area called the Devils Marbles, Karlwekarlwe in the Aborigine language. For the Aborigine this was a sacred site. Groups from several areas would meet in this location each year for a social and ceremonial gathering. Stories from the Aborigine culture and information about the geology of the area helped us understand both.

Other than that stop, we stopped at one bar/gas station. Diesel was $2.147 at this stop. I went in to pay the bill but had to go back outside to read the pump as they didn’t have a connection from the pump to the register. How long has it been since you have seen this? We made a note of other stations on the route in preparation for our return trip. We also noted a number of other stops we might make on our trip to Darwin on the north coast.

Alice Springs is a good size town, the third largest town in Northern Territories. There is a large Aborigine population here and many seem to be unemployed or underemployed. The history of Australia and the treatment of the Aborigine is similar to the US history with the native Indian population. A clash of cultures and the looser suffered under years of persecution. Recovery from this situation is difficult but I can see the Australian people are making an effort to rectify the situation. Aborigine culture is part of almost every exhibit we have seen and Aborigine tribes have been given control of many lands that were historically theirs. This includes control of national parks or parts of national parks.

We visited several sites in Alice Springs in our three day stay. On the top of the list was the historic part of town which had a number of historic buildings and a collection of art, cultural and civic museums. We started with the National Pioneer Women Hall of Fame. The exhibits honored women from all of Australia who were the first to enter a profession or to achieve great accomplishments, overcoming cultural practices that limited women’s choices of career choices. The stories were inspiring and the exhibit was really first class. We also made a quick visit near closing time to the Flying Physicians Museum which detailed the history of medical service to the Australian Outback.

Our third day in town was devoted to flying. As a pilot, I need to fly on a regular basis to maintain my currency. When I travel for extensive trips in the US, I like to rent a plane somewhere and go sightseeing. In foreign countries, I would need to obtain an endorsement for my US license or a separate license in the country in which we are traveling. As an alternative, I can hire a flight instructor and take a flight lesson that allows me to fly a rental plane. It is a work-around and one that I welcome, I have flown with dozens of flight instructors over the years and have enjoyed learning from most all of them. Simon was no exception, he charted a course from Alice Springs out to Bond Creek where I made several landings on a bush field, or as he described it, a dust and dirt field. This was a first for me and I greatly enjoyed the chance to venture outside my normal experiences. We also flew along a mountain range to the west of Alice Springs and I enjoyed seeing the interesting rock formations. We left Alice Springs on Wednesday morning heading for Uluru, the big red rock at the heart of Australia, AKA Ayers Rock.