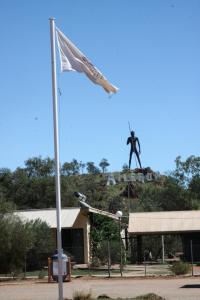 The next thing I looked for was the logical campgrounds on the trip north. The first would be to return to Tennant Creek where we had stayed on the way south. There were a number of choices for the next night but the first real town was Katherine, the second largest city in Northern Territories. The problem with Katherine was the distance which was over 600 kilometers. There were only a few stations in between. So Katherine became our goal for the second night. Once there we were officially in the Top End as the Aussies call it. We would be less than 200 kilometers from Darwin and would be near several national parks that looked interesting for exploration.

Now all we had to do on Tuesday morning was execute the plan. The trip from Alice Springs to Tennant Creek was somewhat relaxed. We needed to travel just 460 kilometers so we stopped at several markers including the Tropic of Capricorn. While there I helped a group of Chinese youngsters by taking their picture and then they returned the favor by taking one of Louise and I by the marker. There are many Chinese people touring Australia and New Zealand and we have had nothing but pleasant encounters with all.

We fueled up at Aileron Roadhouse. We were attracted to the roadhouse by a large statue of an Aborigine warrior on the hill behind the roadhouse. There was an art gallery with Anmatjere art works associated with the statue. Outside the gallery there was an equally large statue of an Aborigine woman and child. The Anmatjere tribe owns the land that Aileron Station is located on and they are actively involved in all its operations. We browsed the artwork and found two pieces that looked quite interesting. We asked some questions of the proprietor and discussed prices. We finally settled on one of the pieces, a painting in modern Aborigine style which incorporates many of the traditional forms and figures seen in the older works. With that done, we continued on our way north.

The remainder of the trip was a straight drive to Tennant Creek so we could get into camp before dark. We arrived in time to check in and watch the sun set while we had drinks at their outdoor bar. A couple from Western Australia were there and we had a nice conversation with them regarding things we should try to see in the area we were headed into. They also shared some of their experiences traveling in the US. Another of the many pleasant exchanges we have had with people in our travels.