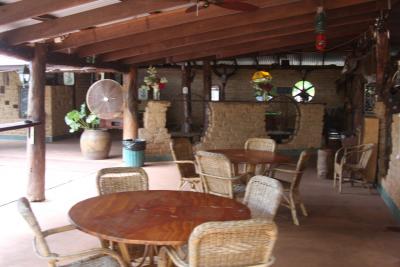 Saturday, April 26 is another moving day. We left Katherine on the way to Kakadu National Park near Jabiru, NT. Kakadu National Park is a world heritage site. It encompasses a large area of land with several large rivers and lakes. It is known for its fishing, birding and crocodiles. There are no swimming areas in the park other than swimming pools. Crocodiles are found in the waters throughout the park. One person laughingly described this as Crocodile Dundee territory! We’re going for the birds, the scenery and the rain forest. The park is on Aborigine land and the Warradjan Tribe has a cultural center here that we’ll visit tomorrow.

The road from Katherine to Pine Creek is the same road we will take on returning from Darwin next week. At Pine Creek we stopped to fill up with diesel as the prices there have to be better than in the remote areas of the national park. We stopped at the Lazy Lizard Caravan Park/Bar/CalTex Petrol Station. Inside I was greeted by an old gentleman who was as friendly as anyone we have met on the road. We conducted the transaction for the fuel and he began telling me about the establishment. Louise returned from the restroom which was in the bar and said that I needed to see the bar. He talked about the bar and some of the unique features.

We walked next door and Louise was right, this was one of the nicest bars we had seen. The building was a block building which was made with blocks from termite mounds. Apparently the termites make some pretty good building blocks. The bar was typical for tropical buildings, it had no doors, the walls were mostly open to the outdoors, there were gaps in the walls with wagon wheels of various sizes, saddles set on top of several walls, there were tables inside and outside and in between, under cover but no walls. There were bar stools drawn up to the walls so you could sit and talk across a wall. There were a variety of fans stirring the air and much more. Louise insists that we will have to stop for the night on our return trip from Darwin. We’ll try to do so. It was just a fuel stop that turned into so much more.

Leaving the Lazy Lizard and Pine Creek we turned onto the road that goes into Kakadu National Park. It is about 60 kilometers to the park entrance and a total of over 200 kilometers to the far eastern side of the park where we will pick up a different road that will take us into Darwin after we have seen what we want in the park. We were planning to stay at the campground at Cooinda Lodge and take an early morning cruise on the lake that is part of the park. We pulled in at 3:00 p.m. and went to check in. We were pleased to find space available in the campground and space also available for the first cruise in the morning. We will stay one night and leave in the morning following our cruise. Then we’ll head further into the park.

An evening walk to the boat dock ended with a spectacular sunset over the water. We didn’t see many new birds but we did meet a couple who visited with us for half an hour. They were from Darwin and had suggestions for our time there. He was in the lumber sales business and she was a librarian and teacher. Now retired, they were camping here with her parents. He spotted my binoculars and said he had just purchased the same kind of binoculars. I have a harness which holds the binoculars without the strap around the neck. He tried mine out, had his wife photograph them, front and back and was talking about making or buying something like that. She and Louise were sharing poetry and talking books while all this was going on. It was just a bird walk that turned into so much more.