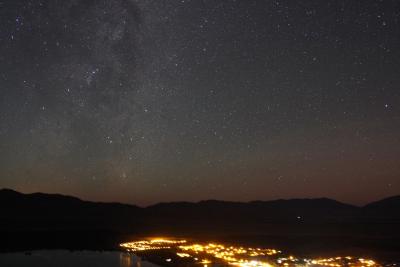 I’ve had several commenters ask questions so I’ll take a little time to answer one of them here. This was written in February and I’m posting it now that our trip has ended.

Regarding the nature of the night sky here in New Zealand. First let me say that you don’t have to go far outside the large cities to experience some of the best dark skies you can imagine. The population is spread thin outside the major cities. One in three people live in Auckland and 85% of New Zealanders live in cities or towns so that leaves just 15% for the rural countryside. On the South Island the population is spread really thin with much of the area being mountainous.

The Milky Way stands out brilliantly from most everywhere on both the islands. This alone can confuse the casual visitor. There are few places in the US where you can see as many stars in the sky as you will here in New Zealand. That is simply because it is almost impossible to get far from centers of population in the US and we have a love of light at night. So we light up the night sky to an extent that hides many stars. See The Globe at Night website for more information about light pollution in the US. In major cities you will only see a handful of stars, the brightest planets, our Moon and Sun. Fill the sky with stars and it’s hard to pick out the familiar groupings you may know.

Now, as far as recognizing constellations, there are three challenges to be met. The first is that when you look to the south you are seeing stars that an inhabitant of the northern hemisphere never gets to see until they cross the equator. This is one of the great treats of crossing the equator. The whole of the south circumpolar region is completely new. It would be like someone from New Zealand coming to the northern hemisphere and seeing the north circumpolar stars, the Big Dipper or Ursa Major and Little Dipper or Ursa Minor, Cassiopeia, Cepheus, Perseus, Andromeda, and Draco would all just look like a jumble of stars until they picked up a star chart and began to pick out the patterns of those constellations.

The second challenge is that the portion of the sky that we are familiar with is all upside down. As we look at the sky in the northern hemisphere, the projection of Earth’s equator onto the sky would form an arc from east to west and at its highest point will be south of the zenith (the zenith is the spot straight above your head projected onto the sky). Everyone has their own personal zenith and it changes as we move about the planet. The equator is south of our zenith in the northern hemisphere. The further north you are, the further to the south the equator will be.

Take the constellation Orion as an example. Earth’s equator passes right through the belt of Orion. When we look at Orion from the northern hemisphere, the star Betelgeuse forms one shoulder and is well above (to the north of) the equator. The star Rigel forms one knee and is well below (to the south of) the equator, thus Orion seems to be standing upright with his head toward our zenith (our head) and his feet toward the southern horizon in line with our feet.

So the entire sky is now rich with stars, upside down and backwards (left-right reversed) and there is a whole cast of new characters around the South Pole that you only see from the southern hemisphere. Even for a seasoned observer of the sky, this presents challenges. The casual observer may want to enlist the help of a guide! Or, you could just stand on your head and wear sunglasses to observe the stars!

Watching the sun during the day presents the same problems. When the sun rises in the east for us in the northern hemisphere we watch it move across the southern sky and it sets in the west. As we do this we are facing south and the sun seems to move from left (east) to right (west). In the southern hemisphere, it will rise in the east, move across the northern horizon and set in the west. Facing north, the sun will move from right (east) to left (west). So the sun seems to move across the sky in the opposite direction because we are turned around. This also applies to the motion of the stars at night.

I have been an avid observer of the sky for many years and figuring all this out has been an interesting challenge.