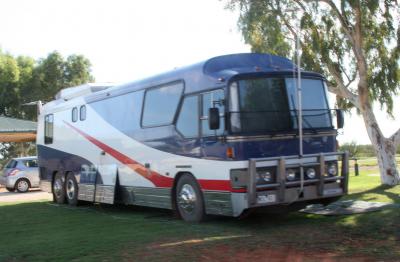 One of the questions that came up was whether we had our motor home in Australia. This is something that one might consider for an extended trip but it isn’t really feasible. There are numerous problems, the first is that the campgrounds aren’t set-up for our motor homes. The power cords we use don’t fit anything here. Current is 220V but the plug is unlike anything we use in the US. They don’t have sewer connections similar to ours, they use one inch hoses for grey water and toilets are a special kind, a small canister which holds toilet wastes. The canister is removed from the vehicle and emptied into specific dump locations. Grey water drains into sumps in some campgrounds but it is quite common to drain grey water onto the ground near the rear of your campsite. Even in campgrounds where sumps are provided for grey water people will drain to the ground if their hose isn’t long enough to reach the sumps. Utilities are not located like our in the US where the electric, water and sewer are all in one place. One electrical post has four or more outlets and would be located on the common corner of four lots in most cases. The four lots being two facing one street and two facing another street. The lots vary in size but most are fairly small. Our 40 foot motor home would not fit on most of these lots.

We have seen a few large motor homes. When we started our travels in New Zealand we stopped at a rest area. As we were standing there looking at the scenery a 1990 Safari pulled in. We took pictures and the owner came over to talk to us. We told him we were amazed at seeing a US motor home in New Zealand. He said he had purchased it in the US and shipped it to New Zealand. This particular chassis was easy to move the steering wheel to the right side of the vehicle. He had the electric cord modified and a few other changes made. We asked how he felt about driving on the roads and he said he didn't travel much. He has a few places he goes to and they have a special lot for him. The only other big rig we saw is in the picture with this posting. We saw it at Exmouth in Western Australia. It had two of the Australian 220V power cords which look like a normal extension cord. We didn't visit with the owner of this rig.

The final nail in the coffin as far as I’m concerned is the price of fuel. We are getting around 15 miles per gallon (in US terms) with the campervan. Fuel prices in Australia have been about $1.55 to $2.45 per liter. So here is the conversion to US terms. It takes 3.785 liters to make one gallon. Multiplying the above dollar figures times 3.785 gives us $5.87 to $9.27 per gallon. These figures are in Australian Dollars which are worth about $0.92 US at today’s exchange rate. Multiplying 0.92 times these figures gives us $5.40 to $8.53 in US Dollars for a gallon of diesel. The prices are lowest in cities and highest when you get way out into the outback, especially on highways to nowhere, those roads that are one way in and one way out. For most of the outback, we’re paying between $1.80 and $2.10 for a liter of diesel. Unfortunately, there is a whole lot of outback in Australia. Needless to say I’ve left a few dollars at Shell, CalTex and BP stations around the country. There are a few other fuel companies but these are generally the least expensive. Frequently there is only one station, no choice at many of the roadhouses in the outback. If the tank is empty, you pay the price and say thank you! With two weeks to go, we have driven about 15,000 kilometers or 10,000 miles in Australia.

Most people here camp in trailers pulled by an SUV or small truck. They frequently attach a tent or screened apparatus to the side of the trailer to give them plenty of protected outdoor area. Camping trailers are almost always pull-behind trailers. We’ve seen just a few fifth wheel trailers. It is not uncommon in the outback to see camping trailers which are built for high clearance being pulled behind a beefy four wheel drive SUV which is used for the many dirt and gravel roads which penetrate the outback. The roads we are traveling which are paved are often the only road in an area with all other roads being dirt or gravel. If you really want to get away from it all in Australia it is easy, most of Australia is away from it all but you need a four wheel drive to explore this area. The alternative for us is to take tours which will haul us into those areas for day trips.