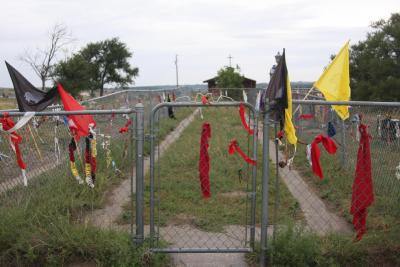 As we left Martin, SD it began to rain lightly. Radar showed rain between Martin and Wounded Knee. As we passed fields of sunflowers their heads were bowed, hiding their bright yellow ray flowers we had seen the day before. The sunflowers are much shorter than the ones I planted in my garden in the 70’s. Their heads are smaller than the 12 to 16” heads I remember from those days. I know these fields are harvested mechanically but I would love to see the equipment that does the job. The heads I harvested in my gardening days were always sticky and getting the seeds out of the head was an exercise in persistence. Modern agriculture has definitely found the height gene in plants. In my childhood one measure of a good corn crop was the tallest corn displayed at the county fair. Those corn stalks were well over 10’ tall. Now the corn in the field stands a modest 5’ to 6’ tall. The waving wheat the sure smells sweet is now little more than 12” tall and hardly moves in the wind these days.

We arrived at Wounded Knee in a light mist. We found the battlefield and parked by the information sign. Nearby there were stalls that on a summer’s day would be occupied by vendors selling their wares. On this Sunday morning, a cool damp holiday weekend, there was no one around.

I gathered my camera and we stepped out of the motor home into the mist. Across the road a young man was approaching. He introduced himself as Alex and asked us for a donation for the local drum group. We talked and he told us of the small museum across the road which was closed this morning. He pointed out the top of the nearby hill where there is a mass grave for the 153 Native Americans who were killed in the massacre. He pointed out significant points on the battlefield in front of us and described the battle that had occurred here. It was a familiar story, the Sand Creek Massacre in 1864 was a similar incident. The US Cavalry faced a village of Lakota Sioux. They were going to disarm the village. Soldiers were searching the village and confiscating weapons. Someone fired a shot. At that point everyone began firing. From the nearby hill the artillery, Hotchkiss Guns, opened fire on the village killing soldiers and warriors alike. Women and children fled into a nearby stream valley and were pursued by soldiers who killed every member of the village. The following day the soldiers collected the bodies and buried them on the hilltop where the artillery was mounted the day before.

We walked to the top of the hill on a muddy road. At the top of the hill stood a small church with a cemetery that surrounded the mass grave from December 29, 1890. Amulets with streamers hung from the chain link fence surrounding the mass grave. A marker identified the 43 warriors from the village who were killed in the battle. I walked around surveying the more modern graves in the cemetery. I was struck by one point. In the surrounding cemetery there were numerous graves of Veterans from WWII, Korea and Viet Nam. Here in a place which marked a massacre of women and children by an overwhelming force there were people who could see past the past and move forward even to the point of joining the very military that defeated them less than 100 years before. To be sure, resentment and a strong sense of injustice still remains for many but obviously there were those who were able to get beyond the past.

I thanked Alex for his guided tour and assured him that this story was not unfamiliar. I mentioned our recent trip to New Zealand and Australia. The native Maori in New Zealand and the Aborigine in Australia experienced similar injustices at the hands of their European conquerors. Clashes between cultures are everyday news today with the history of some conflicts going back many centuries.