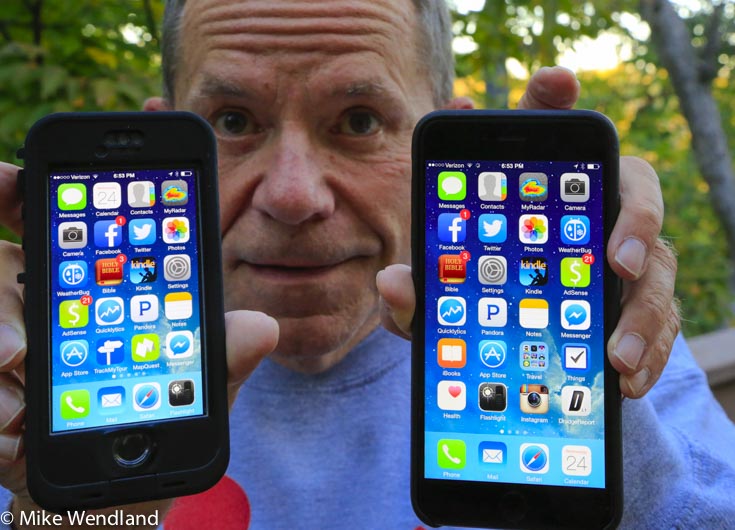 That’s my old iPhone 5 on the left. The new gigantic iPhone 6 Plus on the right.

For as 10 million other people have done over the past two weeks, I’ve upgraded to the new and very large iPhone 6 Plus.

I spend a lot of time online. Too much, in fact. And my eyes and my thumbs appreciate the extra real estate the new iPhone provides.

The first thing I did after transferring all my apps and settings over to the new phone from iCloud (a process that took about 45 minutes on my home Wi-Fi network) was head out to the RV and see if the new phone fits in the Wilson Sleek cell phone booster I use for connectivity while boondocking in areas with weak cellular service. It does. The Sleek has adjustable arms that grip the 6 Plus just fine.

The only time I use the Sleek with a cell phone is when I need to make a call in a marginal area. The rest of the time, my Verizon Mi-Fi data card provides the Internet connection for my various devices. But it’s nice to know that the new iPhone 6 Plus will fit.

Besides the larger screen size, there are eight main reasons why I chose the iPhone 6 Plus.

But before I list them … please … be nice. Like religion and politics, conversations about computers, mobile devices and brand loyalties can get real nasty. So if you don’t want or need these features, or if you use another platform or operating system, then good for you. This post is not aimed at you. This is for the many who do use the iPhone and are wondering what the new big one is like.

Here are the eight things I like most about this new phone, compared to the iPhone 5 I had been using:

As I am getting used to the iPhone 6 Plus, I was surprised that I have not been challenged in using it as a phone. It is big and I’ve seen others say it just feels weird held up to your ear.As I write this, I just finished a half hour radio interview using my new iPhone 6 Plus and it was very comfortable.

Ironically, that interview (with Mitch Album on WJR Radio) was about two problems that have cropped up with Apple’s new phones.

The first is, if you put in in your pocket and then sit on it without a case … it will bend. That doesn’t seem unusual to me. It is thin and super light. So thin it would have to bend when someone sat on it, especially without a protective case. I bought the leather case Apple sells with the iPhone. It does fit in my front pockets. It is too big for a breast pocket on some of my shirts. Not all, but some. But I would never think about sitting on it. So I don’t think this will be a issue for me.

The second problem was on an update that Apple pushed through for the iOS 8 operating system. It was out just one hour when the company was swamped by reports that after updating the OS, iPhone 6 users lost cellular and data connectivity. Apple quickly pulled the update to see what the problem is.recent

If you want to see some three of my favorite things the new iOS 8 system does, here’s one of my NBC-TV PC Mike segments:

So, overall, my first impressions of the iPhone 6 Plus are very favorable. I have a large iPad that I seldom use, except to read books or watch movies. Sometimes, I just leave it at home rather than tote it along on an RV trip, only to wish I had brought it when we’re stuck inside because or rain. I think this new 5.5-inch iPhone will replace the tablet for books. I will try some movies and get back to you on that. But with 128 GB of storage, I’ll be able to download them to the device, besides streaming them on Netflix or Amazon.

Lastly, another contributing factor to my decision to upgrade is the fact that I use my smartphone for so much more than just making or receiving telephone calls. I really use it more as a miniature computer than a phone. So this iPhone 6 Plus will come in very handy, I suspect.

I’ll let you know more after a week or so.

If you think you’d like to upgrade but wonder what you can do with your old phone, check out the video below. It’s another NBC-TV segment I did on places that offer trade-ins for old phones and other gadgets and gizmos.