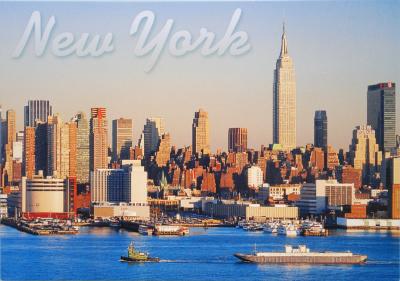 If you're in New England and want to get south or if you're in the south and want to get to New England, you most likely have to pass somewhere near the New York City area. If you have an RV, it's inevitable that someday you'll have to drive through this area on some journey. Its a congested and confusing area to drive through with a maze of highways that crisscross each other. It can be very stressful and intimidating for someone driving for the first time through this area.

Living in New England, I've been driving through this area for a several years now and developed my preferred routes and driving routines. I'm sure everyone has their own thoughts and routes about the New York City (NYC) area and there's no right or wrong answers here. So, in this post I'll share some of what I do when I drive through the NYC area.

Drive on the Weekend

Traffic is lighter on the weekend but this a relative statement. On the weekdays, traffic can be horrendous with lots of delays. On the weekends, it's just plain heavy with maybe one or two delays, if you're lucky. I always plan to leave on a Saturday so I can get thru the whole NYC and DC areas over a weekend and time my returns for the same time.

Drive During Daylight / Drive in the Middle Lane

With all the route changes, exits, interchanges, and lane shifts / merges it's so much easier to see where you're going during the day. Also, on these roads there's lots of exits and off ramps with traffic entering and exiting from the right. While I normally drive in the far right hand lane, I find driving in the middle lane thru the NYC area avoids dodging some of the incoming traffic and getting stuck in a exit-only lane. Also, some of the highways around NYC are 4 lanes wide. Crossing lanes with an RV isn't a quick move and these highways are not always easy for making quick lane changes.

Don't Rely Totally on the GPS

Your GPS will give you the fastest or shortest route based on distance or roads and probably route you onto congested highways like I-95. I turn off my GPS off when I get near NYC. I don't want to listen to Helga (my GPS) telling me to take exits or to go on roads that I don't want to take. Its confusing enough and I don't need to hear Helga jabbering away as I try to stay on my route. Also, have a map handy and study it ahead of time to known which routes you will take.

I-95 through southern Conn and into NYC is a very very busy road. Back ups at the George Washington Bridge (GWB) can be nightmarish. Also, the lower levels of the GWB has propane restrictions. I avoid I-95 at all costs. My preferred route going south (on a weekend) is I-84 thru CT. I go south of Hartford (to avoid driving thru the city) on the Charter Oak Bridge and then get on I-91 south. At Meridan, I get on I-691 west to get back on I-84. I follow I-84 west to I-684 south to I-287 west (what I call the 8 Lanes of Craziness) over the Tappan Zee Bridge (no toll going west) and then follow I-287 around the city until it intersects with the NJ Turnpike well south of the city. Some folks take the Garden State Parkway south off I-287 but it can get bogged down with all the toll booths and traffic is heavier than I-287. 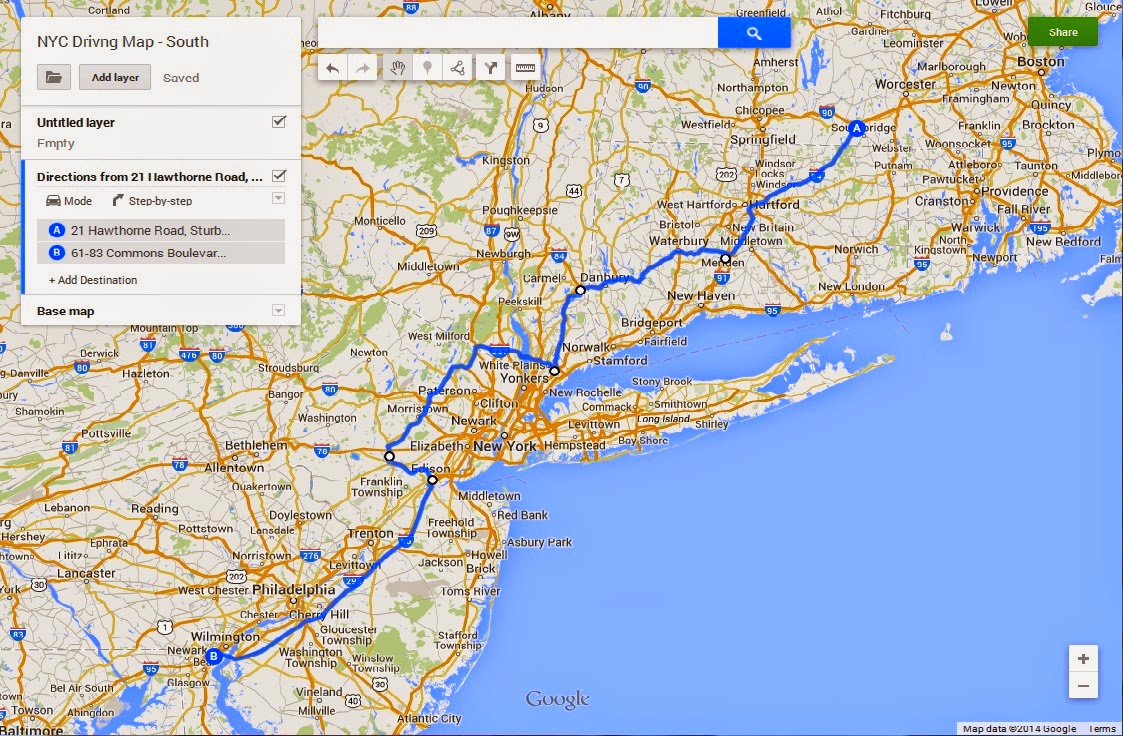 Going north, I'll take the NJ Turnpike north to I-287,then north on I-87 to I-84 east, then cross the Hudson River at Newburgh, NY and follow I-84 east thru CT. This avoids the whole I-287 craziness around the Tappan Zee and the bridge toll. If its a weekday, I'll take I-287 and then go north on the NY Thruway (I-87) north up to I-90 and then follow the Mass Pike (I-90) thru Mass and avoid all of Conn. On a weekday, traffic can be heavy around Danbury, Waterbury, and Hartford and is best avoided. The I-87 to I-90 route is a little longer but its a much easier drive with little to no congestion. 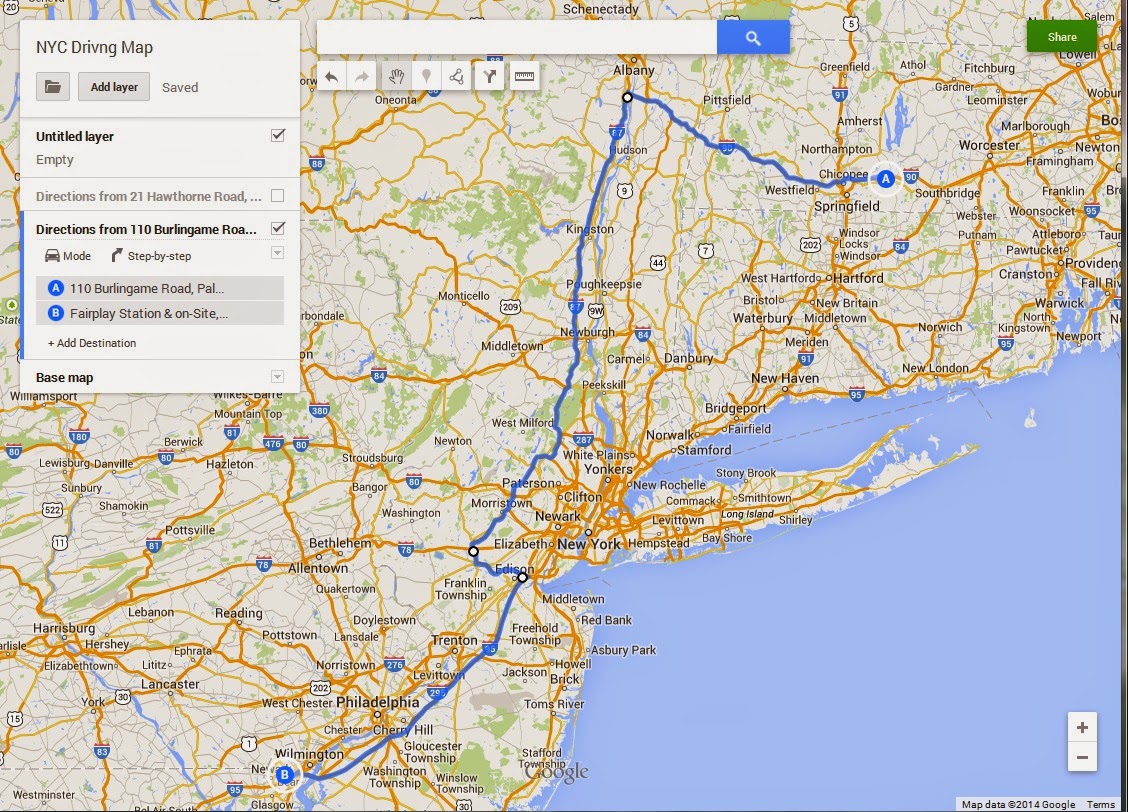 Some avoid this whole area (and the tolls) by going I-84 to I-81into PA and down to MD and VA. I've done this route when heading out west or to the the VA or NC area. Its longer this way and at some point you've got to log some miles getting back to I-95 at either either Baltimore, DC, or Richmond. But it does avoid all the craziness and stress around NYC and that's worth something.

Avoid the Parkways North of the City

The Hutchinson, Saw Mill, and Merritt Parkways north of NYC all have low bridges (to low for RV's). The Taconic State Parkway and the Palisades Parkway don't allow RV's.

The Garden State Parkway (GSP) does allow RV's. There might be a couple low bridges on the northern section. I've never had a problem on the GSP with my RV at 11' 3". Be prepared for lots of toll booths on the GSP. The NJ turnpike is fine for RV's and its a good road now that most of the construction is finished. It also has quite a few rest areas with fuel and food.

Be Prepared for Tolls

You'll hit tolls in Maryland, Delaware, New Jersey, New York, and Massachusetts. It can run close to $20-$30 in tolls going thru this area or more depending on which bridge you go over. Its so much easier to use an EZ-Pass transponder thru this area. All the states on the eastern seaboard (except FL) accept EZ-Pass. You can get a transponder in your home state or apply in a New England state. Some states charge for them, some don't. Be sure to set it up with enough money. If you go thru the NYC area and then back within three days you could easily run out of money in your EZ-Pass account. I set mine up to maintain a $100 balance so I never run out of money.

Fuel is almost $.30-$.40 cents higher in theses states due to fuel taxes. I tend to fuel up in MA and then again in NJ and vice versa on the return trip north. Also, be aware in NJ you can't pump your own (state law) but it does have low fuel prices due to a very low fuel tax.

Around NYC there's few if any campgrounds or places to boon dock for the night. You sort of have to plan to get thru the area before you stop for the night. On the northern edge, there's places to stay up around Newburgh, NY. On the southern end, there's a state park in Delaware (Lums Pond SP) that's open all year and is just a few miles from the highway. It got nice sites around a large field but only 5 have electricity. I've stayed at Lums Pond a few times en route through the area.

That's my wisdom and info on how I drive through the NYC area. I'm always glad when its behind me. If you've got some advice or input on this, please leave me a comment.

You can follow more of my journeys at: http://jdawgjourneys.blogspot.com