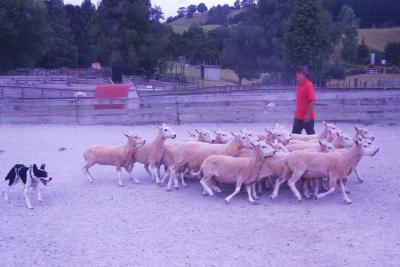 After our long drive from the Waipoua State Forest we pulled up for the night at Sheep World. We had seen this place on the way north, it is right on NZ Hwy 1. It looks for all the world like a real tourist trap but we were tired and it was late so there we’ll stay. The owner is a real character, elderly and quick with his mind.

We had breakfast at their restaurant the next morning then stayed for the dog and sheep show at 11:00. We visited the many animals they had in pens and cages, everything from rabbits and opossums to pigs and deer. There was a nice nature trail and then the show.

John described the two kinds of dogs, eye dogs and away dogs. An eye dog works the sheep by looking at them and running around near the sheep. The sheep react and the dog then reacts to their every move. If they start to go back where they were the dog moves quickly back in that direction and the sheep will immediately turn around and go the other way. The eye dog never barks, only stalks and pursues the sheep in a way that makes them move. He never gets really close to the sheep, always a distance of 20 feet or more away. The dogs instinct is to keep the sheep in a single group and to bring them to John. Not just near him, the dog tries to put the sheep at his feet. John communicated with the dog with a series of commands and whistles. It took five minutes or so to bring the group of sheep into the corral. The job of the away dog is to bark and get the sheep moving. The away dog is used to flush sheep out of remote areas of the pasture. With a big bark he will rouse sheep from ravines and in the bush. Once the sheep are moving his job is finished. Both dogs answer to commands so the herder can stand in one place and round up the sheep. Doing this job for a single person would be almost impossible without the dogs.

Once the sheep were in the corral, John showed how they sort the sheep. Sheep are run through a chute in single file. Standing at the end of the chute a person manipulates two gates to direct each sheep left, center or right into three chutes leading into three different holding pens. If done by a professional, they can do the sorting almost as fast as the sheep can come through the chute. A member of the audience was brought up to sort a group of about 30 sheep. Each of the sheep had a color marking on their head, red, blue or no marking. After a bit of training, she was able to sort the sheep making only one mistake.

John described sheep shearing including job opportunities and pay. It is a high paying profession for really good shearers and they can travel worldwide to work. Then he demonstrated shearing making some of the initial passes. Then he brought up members of the audience. Louise was one of three selected to get their hands on the shears. She got a handful of wool for her efforts. I got to hold a bottle to feed the little lambs which came charging up to get their bottle of milk. It was quite a show and one of the things on Louise’s list that she wanted to see and do on this trip. This will remain a special stop in our memories, kind of like finding a diamond in a coal bin.

Leaving there in the afternoon we began our drive back to Auckland where we would get the water heater repaired. We haven’t had hot water in the campervan since we picked it up five days ago. A quick stop in Auckland and our water heater is working. It took just 15 minutes for the repair at the rental shop. Then we began the drive south out of Auckland. Our destination was a small town, Thames, in the southern part of the Coromandel Peninsula. We were delighted to find the first straight roads for any significant distance. We were able to get up to 90 km/hr (about 56 MPH) most of the way. This turned a long drive into quick work. There is a little yellow sticker at the top of the windshield informing us that we are a “heavy vehicle” and our maximum speed is 90 km/hr. The highest speed limits we have seen here are 100 km/hr. There have been precious few roads that I would feel safe driving the campervan at 90 km/hr.