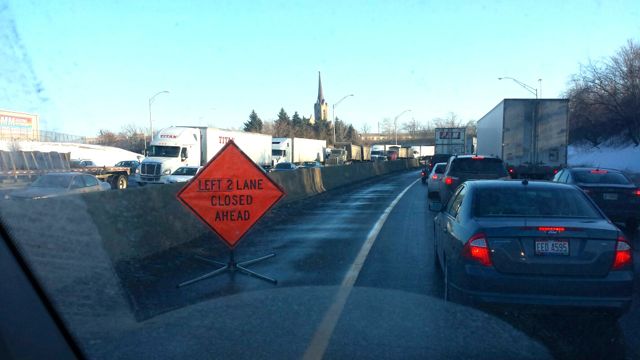 It’s not just the snow and ice that have been setting records in northern states and provinces this winter: So have potholes.

Before setting off on a long trip south yesterday, I stopped by my local tire shop to check the air in my Roadtrek eTrek’s tires. While doing so, I noted how busy the place was. The guy behind the counter beckoned me to take a peek in the garage, where a huge pile of rims were taking up a corner of the workspace. “Potholes,” he said. “We’ve never seen so much damage,” he said.

What may be good business for tire repair places is bad news for motorists.

As we made our way out of southeast Michigan down I-75, I lost track of how many vehicles I saw pulled over on a shoulder, fixing a flat. Michigan, which generally has the worst roads I’ve seen in the entire country, is out doing itself this year. Expansion joints are buckled, there are crater-sized potholes on the sides, shoulders and middle of literally every paved road you travel.

As soon as we hit Ohio, the road conditions markedly improved. But then we hit a massive traffic jam. For two-and-a-half hours we sat on I-75 in Toledo. Both sides of interstate were jammed. It wasn’t for an accident. They were fixing the roads. Three lanes funneled down to two on the southbound side. I’m not sure what the construction project was for, but it was a real mess.

The roads were better, though, in Ohio and Kentucky, where we ended up spending the night. Way more potholes than I’ve seen in normal years but still better than Michigan.

We made about 400 miles. Best news, though, is for the first time since November, the temperatures didn’t get below freezing. I’m hoping to de-winterize wherever we stop tonight.