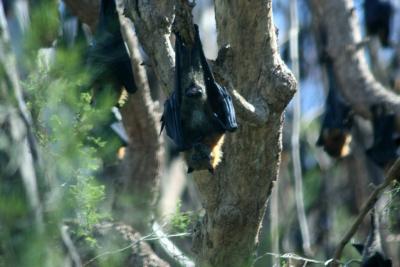 Wednesday April 2, 2014. We’re near the end of the New England Highway and we want to make our way to the coast. Looking at all the opportunities, we decide to make a stop at Mt. Tambourine National Park which is south of Brisbane. The attraction there that drew our attention was a Rainforest Walkway. Without knowing much more than that, we left Rochedale headed north on the final leg of the New England Highway before turning off onto the Scenic Rim Highway. This heads east through a caldera formed when a volcano collapsed. The road follows the scenic rim of the caldera giving spectacular views of the surrounding area.

We pulled into the small town of Boonah for a restroom stop. Louise commented on the chatter of the birds. A little later she asked me what was in the nearby trees. A stranger overhead the question and answered it, those were bats. The chattering noise came from these bats as they rustled around trying to keep cool in the warm sunlight. No doubt this was a difficult challenge for a black creature all wrapped up in its wings.

We went closer to study the bats. With binoculars we could see their fox-like faces and watch them moving around. We learned that there were two types of bats in these trees, both were fruit bats which live in the tropics in the northern part of Australia. They summer at higher latitudes and then return to the rainforest in winter. While here in Boonah, they strip the trees of their leaves and leave droppings which can be quite pungent. They are protected so there is nothing to be done except to tolerate them.

In the visitors center we were told that there were ten times more bats a month ago but that one species, the red bats leave earlier than the rest. The remaining black and brown bats will depart soon. Watching the bats, we enjoyed their efforts to keep cool. This resulted in jostling and a constant shuffling of positions. Bats maneuver using the thumb at the bend in their wings to grip branches and shift from one spot to another, something like monkeys moving about in trees. The brown fruit bats photographed best and the photo with this posting features one of these brown bats with a few others in the background.

There were approximately 500 bats in the trees behind the visitors center. Some branches had a dozen or more bats hanging upside down from the branch. These bats are about a foot long from nose to tail and have a wingspan of about two feet. Occasionally one would fly from one tree to another. In daylight their wings were translucent with their bones outlined almost like an x-ray. In the evening they all leave to go feed. They return each dawn to rest in the trees.