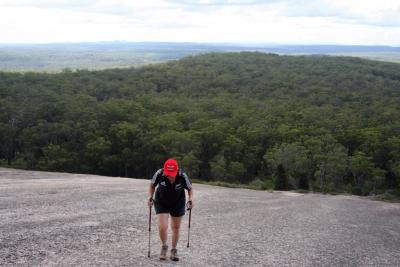 Leaving camp at Mother of Ducks Wildlife Preserve in Guyra early in the morning, we drove to Glen Innes for breakfast at McDonalds. I know, not your idea of luxury dining but they do have internet. We parked behind the building and could access the internet from the campervan. I spent 30 or 40 minutes on line after eating breakfast. Right next door was the i. This one was a jewelry shop and information center. Louise enjoyed chatting with the jeweler. I was able to find several brochures of interest, one being up the road some distance, Bald Rock National Park. It was after noon when we arrived in Stanthorpe. From there we took a small road out of town for 20 kilometers before reaching the turn-off for Bald Rock National Park. A 7 kilometer drive into the park brought us to the picnic and campgrounds and trail heads.

National parks in Australia are not like national parks in the US. While they are designated national parks, each state or territory operates the national parks. In Tasmania, park admission was $27 per vehicle for one day. We paid $60 for an annual pass to all of Tasmania’s national parks and got good use out of the pass in the one week we were there. In the state of Victoria the national parks were free, no admission charge at all. That included all the scenic parks we visited along the Great Ocean Drive on the southern coast. In New South Wales, the fees vary. Some parks are free while others have a small fee. This one cost us $7.00 for the day. Camping would have been an additional $10 per person. Generally the national parks here are protected areas with some having camping, most have only walking trails and picnic areas. They seldom have visitor’s centers and have very limited road access. They are most like the wildlife refuges in the US.

Gathering our gear, we set out to hike up Bald Rock to a promised spectacular view of the surrounding area. Bald Rock is a granite outcrop, part of a batholith, a large igneous rock formation that cooled from molten rock to form solid rock while underground. The resulting large crystal structure and mineral composition make this rock granite. Granite typically weathers or wears down in the form of rounded surfaces which form rounded boulders. As the water, air, heat and cold attack the rock it peels off in layers making a rounded shape. So this mountain of granite is very dome like. There are features like this in the US, two that I am familiar with are Elephant Rocks in the St. Francis Mountains of southeastern Missouri and Enchanted Rock in the hill country of Texas. Bald Rock dwarfs both of these formations. Its dimensions, 260 meters high with an exposure of 750 meters long and 500 meters wide. This is the tip of the batholith that extends 400 kilometers from Tamworth to Stanthorpe and accounts for all the granite outcrops and boulders we have been seeing and exploring in the last several days.

The hike was the kind that I like. It was physically challenging, a 25 to 30 degree slope meant that we were climbing on a surface that was near the limit of what our hiking shoes would grip. Fortunately, the large crystal structure made for a rough surface which gave really good traction. As we climbed further up the rock, we were well above tree level and still going. The height of the rock is 260 meters which is almost 800 feet or 80 stories. Imagine standing on a strongly sloping surface looking down 400 or 500 feet below you with nothing to stop you if you fall. Nothing to do but continue the climb. The course was well marked with 4 inch white disks glued to the rock surface. We both used walking sticks to help support and steady us as we climbed. About three quarters of the way up, the slope begins to level out and now the climb becomes one of picking our way through jumbles of boulders as we go to the top. The white dots continue to guide us. At the top the rock has a little hair, there are trees and shrubs growing on the level surface.

Bald Rock is the second summit we have recorded in Australia, the first being Mt. Williams in Tasmania. In each case the summit is identified with a marker. We spent about ten minutes at the summit before retreating. During our stay we spotted and identified a Flame Robin, a small bird with a brilliant red breast, white wingbars and rump and a little smudge of white just above the bill. This was truly a treat for us. Gathering clouds and some sprinkles convinced us that retreat was the wise choice. No one wants to be on top of anything called bald in a thunderstorm. The rain never really developed and we never heard any lightning. Our trip down was uneventful, we chose a longer, more gentle sloping path down the rock. This led through jumbles of boulders that formed a labyrinth of narrow passageways and even under some boulders resting on others. All along the path were interpretive signs about the vegetation and geology of the area.

Leaving Bald Rock National Park we drove about an hour north to Rochedale to find a park for the night. A warm shower and some internet time were welcome after our previous night at Mother of Ducks Wildlife Preserve.