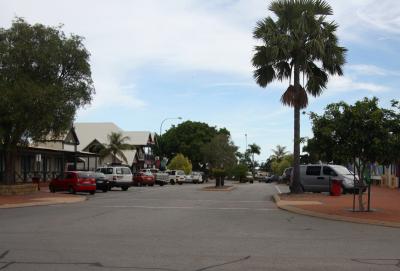 Broome is a small town on the northwest shore of Australia. The pearling industry has been a strength of the area along with tourism. Broome isn’t the only place where pearl farms are found here, it is the center of a large region that extends from Darwin in the north to Port Hedland to the southwest. The largest pearl oysters are found here and the pearls we saw in shops are enormous. The downtown of Broome has a dozen jewelry shops specializing in pearls. We browsed our way through all of them! There are a few other shops and stores and we spent Tuesday afternoon drifting through downtown Broome.

Adjacent to the downtown area is an old jetty which was at one time the place where the pearling boats docked. We walked the jetty, over 100 years old, to the end. At low tide we could see hundreds of red fiddler crabs on the mud below the jetty. Tides around Broome are very large with variations during spring tides up to 30 feet. Spring doesn’t refer to the season, spring tides the tides change very rapidly from low to high tides. This occurs each new moon and each full moon. At the first quarter and last quarter phases of the moon the tides are called neap tides. Neap tides change very slowly. You can imagine a spring tide going from low to high tide with a 30 foot change in water level in about six hours, the water would seem to spring up quite quickly.

The downtown area is known as Chinatown though we saw nothing of China in the shops and stores. The Japanese were primary developers of the pearl farming in this area and much of that history is recounted in the historic plaques and signage. There is a statue to the three Japanese men who started the industry there. It was a very warm afternoon so we stopped at an ice cream shop and enjoyed an ice cream cone while sitting in the shade on the porch outside the shop. School was out and kids were stopping to get an ice cream treat on the way home. Several mothers with young children stopped by the shop. We stopped by the grocery store to pick up a few things before heading back to the campground for the evening.