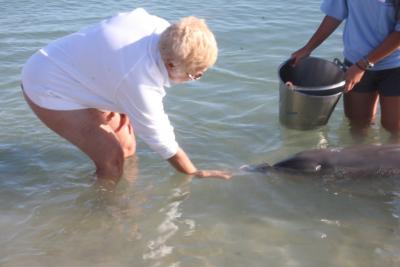 Carnarvon is only about 100 kilometers from Monkey Mia as the Crow flies. We aren’t Crows and we can’t fly in our campervan so we have to drive south for 200 kilometers and then northwest for another 155 kilometers. We made a late start down the road after shopping for groceries and filling with diesel. We took advantage of the discount offered by the grocery store which is pretty standard in Australia. Woolworths, Cole’s and some IGA stores offer a 4 cent per liter discount on fuel at their partner fuel stations. We’ve been taking advantage of this when we can. It doesn’t sound like much but that is the equivalent of about 15 cents per gallon and I know not one of us would pass that up.

We made another fuel stop at the Overlander Roadhouse. A fill-up there would give us enough fuel to make it back there on the return trip without buying fuel at Monkey Mia. It isn’t a good idea to plan to buy fuel at the end of a long road which is where Monkey Mia was located. Another stop along the way was to see some Stromatolites in the Hamlin Pool Marine Estuary. Stromatolites are ancient composites of microbes which form large colonies in shallow water. An information panel described it as the equivalent of a rain forest for bacteria and other one celled living forms. Fossils of Stromatolites are found in Precambrian rocks. Precambrian rocks contain no other fossils so these Stromatolites are the earliest fossils we find on Earth.

After that stop it was almost sunset as we approached Monkey Mia. This part of the trip was mostly to the northwest which was directly into the setting sun which made the driving hard and looking for kangaroos and other straying livestock a real challenge. We arrived in Monkey Mia as the last light was fading from the sky and parked in our spot in the dark. We had done something we usually never do. There is only one campground in Monkey Mia so I encouraged Louise to call ahead and make reservations. I can’t say that it paid off for sure but we didn’t see any vacant sites in this park. The place was packed with campers, this was obviously a very popular site. At the office we got information about the premier event, feeding the dolphins, which occurs each morning. We were given the location and time to be there so we set an alarm to get us up and on our way before the start time.

The next morning, Friday, we were on the beach waiting for the feeding to start at 7:30 a.m. This is a tradition that started many years ago when people in the campground began feeding the dolphins. It became a problem when the dolphins began to depend on the people for their food. Female dolphins would spend so much time in shallow water getting fish fed to them that their calves were dying because they couldn’t nurse in shallow water. The Western Australia Department of Conservation took over the feeding operation and carefully controls it so that the dolphins have to get most of their food by hunting and thus spend time out to sea where the calves can nurse and learn to hunt from the mother.

We were given an explanation of the feeding process and then invited to come to the water’s edge forming a long single line at the edge of the bay. Once everyone was in line we were allowed to come into the water to about ankle depth. This brought dolphins closer to the shore and some of them even came within ten feet of our line. Two rangers from the Department of Conservation talked about dolphins and gave us the history of the program while supervising the group. Once the dolphins were close by, we were told to back up out of the water which signaled the dolphins that feeding was about to begin. Volunteers then brought buckets of fish to the beach. There were only a few fish in each bucket. They spread out along the line and picked people from the line to come feed a dolphin. Out of 130 people there that morning, less than a dozen were picked to feed the dolphins. Everyone else got a close look at the dolphins and the feeding.

Once this was over, we spent some time on the dock looking for turtles which had been in the area earlier in the morning. Then before we left the dock they started the second feeding. This time only 30 people showed up and there were more dolphins. Louise was picked to feed a dolphin named Surprise. By this time it was almost 9:00 a.m. and we needed to be off our site by 10:00 or stay another night. We went back to the campervan and packed up, pulling out at 9:50 a.m. We left the campground and parked in the Department of Conservation parking lot. We ate breakfast and then spent some time in the gift shop and information kiosk learning more about the dolphins and Monkey Mia.

We found out that no one knows exactly where the name came from. There were three possible explanations for Monkey, one being a ship named Monkey that docked there in the late 1800’s. Another explanation is that the name came from the Malay pearlers, who camped at this location, had monkeys. A third possible source of the name is that an Australian colloquialism for sheep is monkey and there were (still are) sheep farms on the peninsula. Mia is the Aboriginal word for home, camp or resting place. The information sheet clearly stated that there are no monkeys at Monkey Mia.