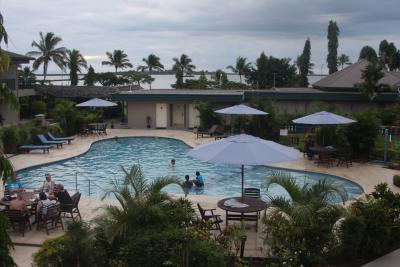 May 29, Thursday, we bid farewell to Australia. After three months our Australian adventure comes to a close. A van to the airport, check in with the airlines and proceed through security and we’re on our way. Of course it just doesn’t happen that quickly. We awoke at 5:00 a.m. to catch a shuttle at 5:30 to the airport. By the time we’ve checked our baggage, it is 6:30. We’re given an exit card to complete to clear customs and immigration as we leave Australia. We stopped for breakfast and this gives us a table and time to complete the questions on the card. Louise picked up several books (3 to be exact) because you just can’t find books everywhere anymore and it is a long flight to our next stop in Auckland, New Zealand.

Five hours later we were in New Zealand. It really wasn’t five hours in the air, there is a two hour time change between New Zealand and Australia. The country has a wonderfully familiar look. We were here four months ago! Our hotel was near the airport and we got a shuttle to take us to the hotel. A nice room with a Jacuzzi greeted us and we both got our money’s worth from that Jacuzzi! Our night was short again, we were up before 7:00 a.m. to be ready for the airport shuttle at 7:30. Grab the bags and run – that’s our motto. We got cards to clear customs and immigration in New Zealand and then on the plane we got arrival cards for Fiji.

The flight to Fiji is a short hop, 2 hours and 30 minutes straight to the north of Auckland. We arrive shortly after 2:00 in the afternoon. Transport to our hotel in Lautoka just 20 miles away is quickly arranged. We are sharing a van with another couple and their two children. They are from New Zealand on a winter vacation to Fiji. The ride to Lautoka is an awakening. We are in a genuine third world country. For all its romantic image, the nation of Fiji is a very poor country. Poverty is evident everywhere. Our hotel, the Tanoa Waterfront Hotel is a quality hotel and our room is very nice. The food at the restaurant is excellent. After two early mornings we slept in late. Check out is 11:00 a.m. and we have three or four hours after that until our cruise boards. We got lunch and then relaxed in the lobby until time to get a cab to the docks for our cruise. It is a five minute ride to the dock and then a half hour wait with the rest of the arriving crowd until we are able to board.