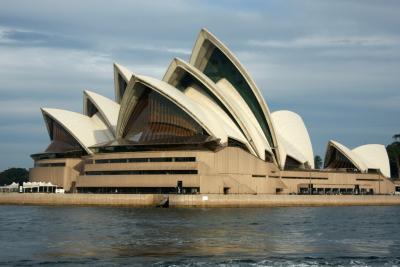 By Tuesday we had accomplished all our first priority activities for our stay in Sydney. The forecast for Tuesday and Wednesday was a chance of rain but the rain never materialized. We left the hotel and took a city bus downtown to Circular Key, the heart of the transportation hub in Sydney. The bus route terminates near the ferry terminal and the commuter train station. We went to the ferry terminal and located the Manly Fast Ferry, a ferry service for people traveling to and from destinations within the Sydney harbor to the south of Sydney. It is not a tour boat but we used it as one. At the ticket office, we inquire about the ferry. The lady at the window says I’ve got a ferry just for you. She motioned toward the boat at the dock behind her and said it was about to depart and we could purchase our tickets on board. We hustled down the dock to the ferry and were welcomed by a young man who directed us across the gangplank and promptly pulled it in behind us. The lady in the ticket booth was correct, we were the only passengers on the ferry as it left the dock.

We took seats on the top deck, an open air deck, which facilitated photography. Leaving the dock we got a harbor view of the Sydney Opera House. This was the only way to see the front of this amazing building. Among the stops were the Sydney Zoo and a National Park on the site of an early 1900’s immigration station. Manly is a community near the mouth of the harbor. All along the route we see one harbor after another with dozens of boats moored in each one. Beautiful homes crowd the hills along the harbor. In Manly we see many condominiums with harbor views.

Our ride was suggested to us by an exhibitor at Vivid Sydney. He said you haven’t really seen Sydney until you have seen it from the harbor. He was correct. The ride around the harbor was a completely different view of this thriving city. Sydney is a city built around a harbor and they love their harbor. The Manly Fast Ferry is only one of the ferries that operate here. The City of Sydney also has an extensive ferry line that serves all areas of the harbor. There is a constant flow of ferry traffic into the ferry terminal day and night.

Sydney has almost one quarter of the entire population of Australia. With nearly 4 million people, there is a life to the city that is found only in the largest of cities in the US. Our hotel was about 3 miles from the center of downtown Sydney. Foot traffic is heavy from downtown all the way out to our hotel all day long and well into the night. It is not uncommon to wait at a cross walk with 20 other people facing another group of equal size on the other side of the intersection. At ten in the evening we were surrounded by other pedestrians and felt quite safe. Sydney has a very diverse population. Its proximity to the Orient accounts for a large percentage of people from that area. We also met many people who were recent immigrants from European countries.

One thing that stood out in our experience was the completely peaceful nature of the crowds of people. We saw no rowdy behavior or violence. Graffiti was rare and people were friendly, willing to strike up a conversation with us, total strangers. I even had one young man ask me how to use his Sony digital camera to photograph the night lights of Sydney. Not being familiar with his camera I couldn’t offer him much help but tried to give him some idea what the numbers on his digital display meant.

We rode a city bus back toward the hotel but got off a few blocks away to get dinner at the Three Wise Monkeys Bar, now a favorite of ours. Once again we got a seat at the window and enjoyed watching the passing parade on the sidewalks of Sydney.