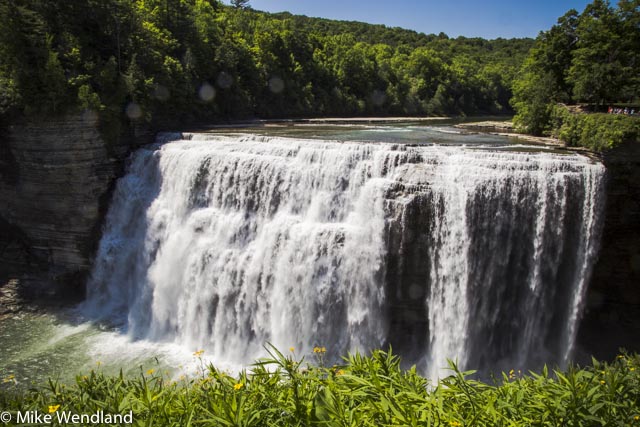 One of the nicest state parks we’ve found anywhere in the country is the 14,000 acre Letchworth State Park, 35 miles southwest of Rochester and about 60 miles south of Buffalo. Often dubbed as “the Grand Canyon of the East,” Letchworth offers easily accessible and spectacular views of a deep, 600-foot gorge carved out of the limestone and sandstone shale by the Genesee River.

Suggested to us as we were making our way from Michigan to Cape Cod by Roadtreking regular W. Dan Hulchanski, Jennifer and I overnighted there and spent the evening and the morning of the next day hiking and photographing the amazing scenery during a picture postcard perfect June weekend.

Besides the gorge, the park boasts a series of spectacular waterfalls, the three major ones called the Upper, Middle, and Lower Falls, located in Portage Canyon, the southern section of the park, about 10 miles from the 350-site campground.

Millions of years of geological history can be observed in the rock formations exposed by erosion.

The region’s rich heritage of the Seneca Indians is well-documented in the park with displays, a restored Seneca Council House and the grave of Mary Jemison, an American frontierswoman who was captured by the Seneca Indians while a teenager but later chose to remain a Seneca.

Swimming pools, fishing areas, hiking trails, hot air ballooning, whitewater rafting and canoeing by permit are just some of the additional attractions at Letchworth. The trails are well maintained and parallel the gorge and take you right up close enough to the waterfalls that you are cooled by the fine mist.

The biggest is the Middle Falls, which is 250 feet across and drops 107 feet.

A full schedule of events is offered each year within the park. They range from festivals to lectures and guided walks, to the noted Fall Arts and Crafts Sale.

Pets are welcome at the park, but are restricted to three loops of the campground. If you do bring a pet, make sure you have a copy of their rabies inoculation, as you won’t be allowed to register without. All sites have 30 amp hookups. Some have 50 amp for bigger RVs. The overnight rate for non-New York residents is $32.50, including park admission. 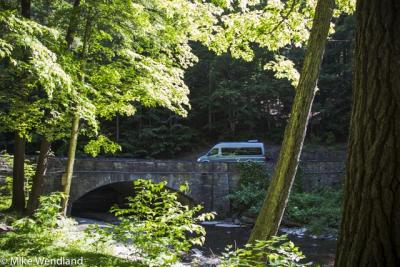 Roads are canopied and take you right next to the gorge. That’s our Roadtrek Etrek going over a stone bridge.

This is Inspiration Point, which offers a great view of the Upper Falls (at top of photo) and the Middle Falls. 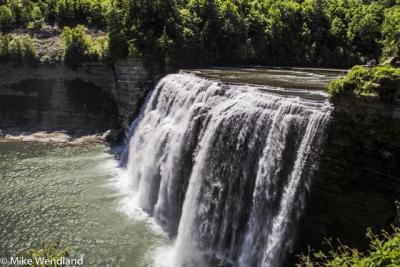 Well-maintained paths and trails get you right up close to the falls. 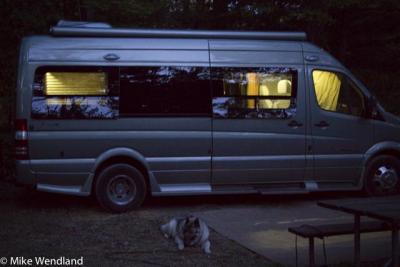