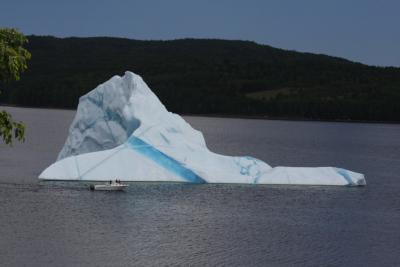 On our way through New Brunswick we encountered a toll road. I pulled up to the toll booth and asked what the toll would be for us. The man in the booth said it would be $5.25. I asked if he could take US money and he said yes. I handed him a $5.00 bill. He punched that into his register and laughed, "It looks like I owe you 75 Canadian pesos." I laughed as I took the change and replied, "Gracias." He laughed. Yes my friends, the US dollar is riding high against the Canadian "peso." The exchange rate as I write is $1.00 US to 1.30 Canadian. A car wash for $10 Canadian shows up on the credit card bill as $7.71 US. Four nights in a campground billed at $124.00 show up on the credit card bill as $96.06 US. I am afraid that if that rate of exchange continues many of our Canadian friends may not show up at Sandpipers this winter. From their viewpoint this is a powerful stimulus to stay home or find another country for their winter resort.

Our weather has been constantly rainy and cool. Today we had light rain most of the day and temperatures haven't made it out of the 50's all day. The Canadians in New Brunswick, Nova Scotia and here in Newfoundland are referring to this as the year without a summer. We come north to escape the hot Texas weather but this is exceeding our expectations. Speaking of cool, we've seen just a few small patches of snow on shaded spots on some of the higher elevations.

There was a wasp in the cockpit as I was driving on Monday. We were headed north and west from the town of Deer Lake toward Gander in the north central part of Newfoundland. Now I'm not afraid of a wasp, not panicky afraid, so I asked Louise to go get the fly swatter. It was in my side window and there was no good way for Louise to get to it. I'm not going to start swatting until I'm certain of killing it. So, as we approached the small town of Springdale, we saw a sign for a Tourist Information Center at the intersection of the Trans Canada Highway and Highway 390. We pulled in, I dispatched the wasp and we decided to go into the visitors center to gather some information.

There were three young ladies at the desk and we asked them about several items, including where to see icebergs. They perked up with the mention of icebergs. They informed us that we could see an iceberg at King's Point just 15 miles from the visitors center. They said no one had seen any icebergs lately, the season was over. I wondered if this was the chamber of commerce line to get people to come to King's Point.

Louise was really excited about the possibility of seeing an iceberg, so we decided to go see for ourselves. We were told we could leave the motorhome parked at the visitors center and take the car. It didn't take long and the car was free and we were on our way. I had no idea what to expect. King's Point is located at the end of a long narrow fjord, a channel scoured out by ancient glaciers. How in the world would an iceberg make its way all the way down this long (10 miles) and narrow (1 mile) channel? As we came into King's Point the speed limit dropped and our expectations soared. Coming over a small rise in the road we could see the water of the fjord. There along the far shore was a small but distinct chunk of ice. I thought this surely was a small bit of ice someone had lassoed and towed into the fjord just to hook unsuspecting tourists. A moment later the real iceberg came into view. Towering over the buildings of the town it sat just off the near shore having run aground. Now this is not the iceberg that sank the Titanic, this one is a small but still impressive piece of ice. Keeping in mind that most of the ice is below the water level, it is really impressive. In fact, I just looked it up to confirm my memory and indeed, about 1/10 of the ice is above water level.

We drove to a point where we could get a good look at the iceberg and I began taking pictures. We walked from pier to pier getting closer and getting more pictures. What an amazing sight this was. The ice glistened in the sunlight. There were deep blue lines of clear ice through the iceberg enhancing its appearance. As we were leaving the last pier a man mentioned to us that if we followed the road up the hill we would find a gravel parking area where we could get a good view of the iceberg. We hustled back to the car and drove up the road to that parking area. There was one car there and we backed in next to them. We were now closer to and above the iceberg. Seeing from this angle one part of the iceberg looked like the tail of a whale. Examining the iceberg through binoculars we could see cracks and lines that weren't visible to the naked eye from this distance. I studied it from top to bottom and took dozens of pictures with my telephoto lens. After about 50 people had come and gone we decided to go get some food.

As we drove down the hill to the restaurant Louise said that she saw a boat that had been out by the iceberg. We had asked another boater if we could get a ride out to the iceberg. He said he would be glad to do it but his motor was broken. Indeed the cover was off the motor so that wasn't going to work. As we neared the restaurant Louise saw the boat coming into the dock behind the restaurant. I stopped the car and she got out to see if they would be willing to take us out to get a close look at the huge hunk of ice. When she returned with a beaming smile I knew the answer. They were stopping to get lunch themselves so we ordered food also. As soon as we finished eating we joined them in the boat. They were Tracy and Troy. Tracy was a native of King's Point now working in northern Alberta. Troy works in the public works department at King's Point. They took us to the iceberg and slowly circled the beast at a distance of about 30 feet away. We could see water pouring off the iceberg as it melted away. As impressive as it was from a distance, it was even more amazing up close.

We circled the iceberg three times slowly before heading across the fjord to the smaller piece of ice we had initially seen when we came into town. It was a small piece that had broken off the main iceberg the day before we arrived. When it broke off the iceberg rotated, This happens when the top or one side becomes lighter and then the ice will float with a different portion above the water. It is not uncommon and is one of the dangers that an iceberg can pose. The small piece was impressive in its own way. After we had a good look at it, Tracy showed us the ice they had captured on their first trip out. They decided to bring in more ice so we could have some.

There were several dozen small chunks of ice in the water so we drew up beside a piece about six feet long and two feet wide at the widest point. With a gaff Tracy pulled the ice toward the boat while Troy maneuvered the boat. Now pulling on a piece of bobbing wet ice is no easy task. It constantly slips away and the least missed attempt to bring it in can instead push it away. Once it is captured, Troy chipped away, breaking small chunks off as Tracy scooped them up with a net. Once the hold was topped off with ice, we were on our way back to the dock. We gathered up our ice prize, thanked Tracy and Troy for the experience and exchanged contact information so we could exchange pictures. We extended an invitation to come visit us in Texas when the snow up north became too much to bear.

Now what do you do with ice from an iceberg? Well, the only decent thing to do is chill a nice cocktail. When we got back to the motor home we broke into the liquor cabinet and chipped up some of the ice. One of the first things we noticed about the ice is that you could see hundreds of air bubbles in even the smallest piece. Louise and I knew that these bubbles contain air which was trapped in the ice many thousands, perhaps even millions of years ago. Scientists have captured this air and analyzed it to give us long-term baselines for the carbon dioxide content of the air on earth long before people were able to impact the makeup of the air. These samples establish a history of changes in the CO2 levels in the atmosphere as well as concentrations of other gasses. What I hadn't considered is that the air trapped in the ice is compressed. Just as the fluffy snow that fell was packed into dense ice, the air was squeezed into a smaller space. So now as the ice melts, the air pops out of its frozen container. You can feel it if you put a piece of ice on your tongue. So we had snap crackle pop drinks. There is a supply in the freezer that may last us all summer if we can keep it from evaporating away in the freezer, ice does that you know.

And it all started with a wasp in the cockpit! We had to stop at just the right time. I guess I should have thanked the wasp instead of killing it.