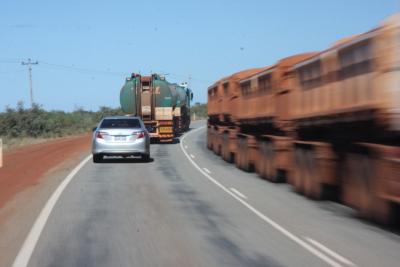 Port Hedland was an overnight stop, we left in the morning intending to drive to Exmouth on the Exmouth Peninsula to the southwest of Port Hedland. The road route is over 700 kilometers which was a surprise to me. I had looked at the map and figured the distances at something over 400 kilometers. When I programmed the GPS in the morning I thought it must have a different route in mind. So Louise went to the map and confirmed that the distance was going to be over 700 kilometers. We have driven 700 kilometers in a day but I wasn’t prepared for that this day. We had a grocery stop to make and the trip would require multiple fuel stops so we right away decided that any attempt to get all the way to Exmouth would not work. As we drove we discussed options including staying at some remote location without power or utilities or finding a campground. We decided to drive until late afternoon and then based on where we were, make a decision about our stopping place for the night.

Leaving Port Hedland we were escorted by dozens of truck trains. Most were associated with the local mining but there were truck trains hauling fuel, heavy equipment, wide loads and more. In this case there is nothing to do but simply keep up with traffic. South of town the Great Northern Highway, which we have driven across Western Australia to Broome and now south, turns inland and so did most of the truck trains. We continued on south on the North West Coastal Highway. Truck trains drive this highway as well but their numbers are about what we have experienced on other highways in the Outback. The road is in excellent shape, we encountered no road work once out of Port Hedland. The terrain on this route is very flat. We could see ranges of hills or low mountains in the distance. The road managed to stay between these obstructions with few changes in direction. I set the cruise in the low 90’s and we rolled along quite comfortably.

We pulled off the road in Karratha to eat lunch and top off the fuel tank. The next leg of the trip was over 200 kilometers without any fuel along the way. With a full tank we drove for three hours with a short restroom stop midway. We arrived at the Nanutarra Roadhouse about 5:00 p.m. and fueled the campervan. There wasn’t much discussion at this point. It was late in the afternoon the sun would be setting in an hour or so.

We were seeing cows along and on the road and we had just come through a section which was damaged during recent heavy rains. There were camper swallowing pot holes in the road and places where the highway was so broken up they had put gravel in place to make it easier to drive. Guess how long the gravel stays with the truck trains driving over it. With no traffic in either direction, I could drive slowly and weave all over the road to take the safest way through the obstacles. Facing the prospect of driving through all this in the dark, it was an easy decision to stay at the campground at Nanutarra Roadhouse. Besides, tomorrow is Mother’s Day and Louise should have the deluxe accommodations, restrooms, showers and electric power! Happy Mother’s Day dear!